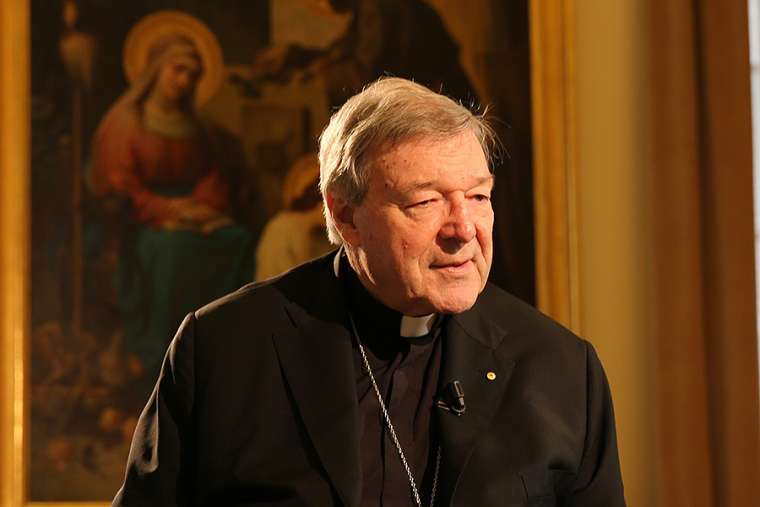 Cardinal George Pell, who was acquitted this year after becoming the highest-ranking Catholic cleric ever to be convicted of sexual abuse, spoke this week about how he maintained hope during his 400 days in prison.

“The virtue of Christian hope is different than Christian optimism. No matter what your circumstances are in this life, eventually all will be well. A good God is in charge, even though terrible things happen,” Pell, 79, said in an interview aired Aug. 16.

Pell was initially convicted in Australia in 2018 of multiple counts of sexual abuse. On April 7, 2020, Australia’s High Courtoverturnedhis six-year prison sentence. The High Court ruled that he should not have been found guilty of the charges and that the prosecution had not proven their case beyond a reasonable doubt.

Pell spent 13 months in solitary confinement, during which time he was not permitted to celebrate Mass.

The cardinal still faces a canonical investigation at the Congregation for the Doctrine of the Faith in Rome, though after his conviction was overturned, several canonical experts said it was unlikely he would actually face a Church trial.

Pell said despite the discomfort and humiliation of being in prison, he was often surprised by the decency and professionalism of the majority of the prison officers, who conversed with him and other men in solitary confinement.

“I knew intellectually, forensically, that my case was enormously strong,” he said, but added he was not “optimistic” in a human sense. His faith, and daily prayer, helped to keep him from despair and bitterness, he said.

Pell said he would have, under normal circumstances, celebrated Mass for the many people who routinely asked for his prayers.

While in prison and forbidden from celebrating Mass, Pell said he would instead pray a Memorare to the Virgin Mary for the person’s intention immediately.

He said he also fostered his prayer life through praying the Divine Office, spiritual reading, and watching Mass every Sunday at 6 a.m. He said he would even watch Evangelical preachers from the U.S., such as Joel Olsteen, on television, and “make a theological critique of their efforts” in his journal.

Pell also wrote three pages a day in his journal. He said he had originally thought he might be in prison for three months, but it ended up being 13 months.

He said writing was good therapy, and that he hopes what he wrote might help others.

Ignatius Press plans to publish in Spring 2021 either an abridged version of Pell’s prison journal, which runs to 1,000 pages, or the first volume of the full text, the publisher said in June.

In terms of keeping up with goings-on in the outside world, Pell said he had a newspaper to read three times a week and would watch television for the national news. He said he closely followed the events surrounding Brexit, as well as theAmazon Synod, which took place at the Vatican during October 2019.

Pell said although he had some concerns about the synod while it was going on, “the results weren’t too bad.” Pope Francis’ apostolic exhortation on the Amazon— the final result of the synod— calls for women in the South American region to be included in new forms of service in the Church, but not within the ordained ministries of the permanent diaconate or priesthood.

“What gains there were— well, that’s for those who were present to say,” Pell said.

Supporters would also send him clippings and articles; he said they knew that news would provide some intellectual stimulation.

Another subject that Pell watched with keen interest from prison was thestill-unfolding saga of financial scandalat the Vatican’s Secretariat of State, involving, among other things, a questionable deal to buy a struggling hospital in Italy, and another to invest in a luxury apartment complex in London.

Pell was appointed by Pope Francis as the first head of the Prefecture for the Economy in the Vatican, charged with overseeing and reforming Vatican finances. AsCNA reported, he had objected to the loan request to purchase the bankrupt hospital, but his concerns were overruled.

Pell’s term as head of the prefecture officially ended in 2019, but he took a leave of absence from the role in 2017 in order to travel back to Australia to face the charges of sexual abuse.

He said it has been the case for some time that the Vatican loses money every year. In 2018, the Holy See had a budget deficit of 70 million euros in its 300 million euro budget.

The COVID-19 pandemic has made the situation all the worse, Pell noted. In particular, the Vatican Museums have suffered a steep decline in revenue from the lack of visitors.

Pell noted that the Vatican has a patrimony— or church endowment— to draw on, which is probably less than many major universities, but nevertheless can offer some relief in the short term.

“It’s a little bit graphic to say the Vatican is going broke. It isn’t,” he said.

“But they can’t keep losing money at the rate they are forever…In the published sense, I haven’t seen any suggestions that would really address what is a significant financial challenge, if not a radical one.”

It is also public knowledge, Pell said, that the Vatican has a “very looming and considerable” deficit in its pension fund, as do many countries in Europe.

Inefficiency and corruption have hurt the Vatican for years, he said, citing the recentLondon property scandalas an example of a situation that typifies both.

The Church is not a business, he stressed; those in leadership roles in the Church must be very strong and vigilant against corruption.

Still, he expressed some optimism that the Vatican’s Council for the Economy— to which Pope Francisappointed 13 new members, including six women, in April— will be successful in rooting out corruption by taking a “firm stand on the basic issues.”

“Most if not all of the crooks are out of the system,” he opined.

Pell said the Christian concept of redemptive suffering was a great comfort to him while enduring the humiliation, quiet, and boredom of prison.

“I was quite confident that my small sufferings— and they weren’t enormous— were something that could be offered, with Christ’s suffering, for the good of the Church,” he said.

“I knew I was innocent, I knew logically and forensically that I had a very strong case, that I would be vindicated. But in a spectacular failure, the most senior judges in Victoria were unable to see that.”

Pell acknowledged that the Church in many parts of the world is under tremendous pressure, in Australia most of all, in his mind, from anti-Catholicism.

In 2017, Australia’s Royal Commission released a report on sexual abuse of minors in the country, the result of a five-year enquiry into the behavior and responsibility of institutions including the Church, with redacted portions relating to Cardinal Pell released in May 2020.

In the newly available material, the commission said that Pell knew about the abusive activities of two priests during his own years as a priest, and that he failed to act to stop them, whichPell has since denied.

Pell said the scandal of pedophilia, and the very real crimes committed by some in the Church, are making it even harder for the Church to proclaim the Gospel message.

“There is no getting away from the crimes that were committed. Those were infamous. Nor were they dealt with well. But in Australia, we broke the back of the offending in the early ‘90s. This was even acknowledged by the council assisting in the Royal Commission,” Pell said.

The Commission did not explain to people that the Church had acted “resolutely and effectively” to impede the plague of abuse starting in the mid-90s, Pell opined. He said it is clear from statistics that very few offenses have occurred in Catholic institutions “this century” in Australia.

Pell sought to remind the U.S. Catholics that the Church in the U.S. is, for the whole Western world, “vitally important for us in smaller countries.”

Though the U.S., like many places, has had problems and scandals, including with leadership, Pell said it is important for smaller countries to rely on the U.S. Catholic Church for leadership, scholarship, and pastoral methods.

Still, Pell said he believes that if the Church remains true to Christ, and the teachings of the Gospel, new leaders and renewal movements will come along, as they did in the times of the Benedictines, Franciscans, and Jesuits.

“Adversity is not necessarily bad for the Church. Adversity can bring the best out of us,” he said.