Carlo Acutis raises question: What does it mean if a saint’s body is ‘incorrupt’? 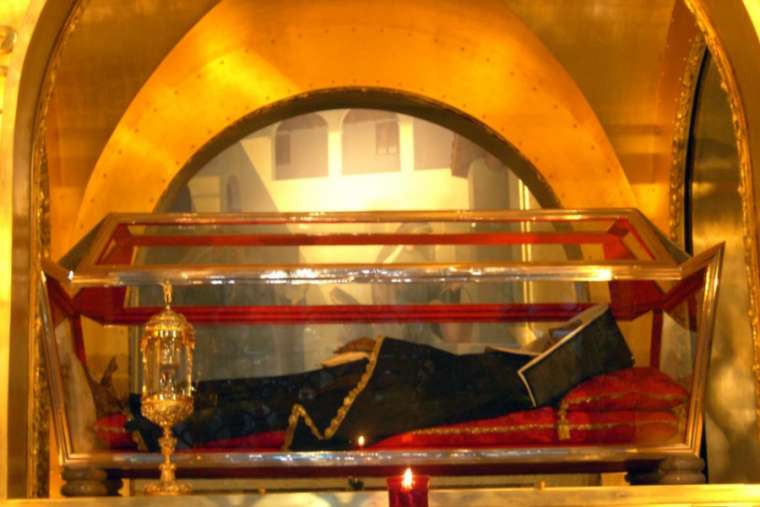 Carlo Acutis raises question: What does it mean if a saint’s body is ‘incorrupt’?

Photos of the soon-to-be beatifiedCarlo Acutis have caused some confusion online. The body of the teen computer whiz was displayed for veneration in Assisi, Italy, Thursday.

In the photos, Carlo’s body appearedto be preserved from the natural process of decay after his death in 2006, and some thought that he could be incorrupt.

BishopDomenico Sorrentinoof AssisiclarifiedOct. 1 that Carlo’s body (pictured), though intact, “was found in the normal state of transformation typical of the cadaveric condition.” Carlo’s body was arranged with dignity for its display for public veneration and a silicone reconstruction of his face used, he said.

It is the miraculous preservation of the body from normal decay after death.

The Church does not have a cut-and-drieddefinition of what condition a holy person’s body must be found in to be declared incorrupt, and it does not necessarily require that the bodyremains permanentlyin the same condition in which it is found.

The Catholic author Joan Carroll Cruz, who died in 2012, wrote about the phenomenon in her 1977book“The Incorruptibles.”

She identified 102 saints or blesseds who are recognized by the Church to be incorrupt.

She said there were certainly many more, but these 102 are “the great majority, and certainly the most famous.”

Cruz did extensive research for her book and, because she was writing before the internet, corresponded with the shrines holding the bodies to authenticate their incorruptibility and to discoverif they had been embalmed.

She noted that at the time she was researching and writing, there were errors, or “false rumors,” about the incorruptibility of some saints.

Photo quality could sometimes lead people to believe that the “simulated figures” holding the relics of saints were really miraculously preserved corpses, she wrote.

An 18th-century pope gave his definition of incorruptibility in a treatise on the process of beatification and canonization of saints.

Prospero Lambertini, the future Pope Benedict XIV, wrote the lengthy work while serving in the Holy See’s congregation for the promotion of saints’ causes from 1708 to 1728.

Two chapters of the book, titled“De Cadaverum Incorruptione,” outlined the young theologian and lawyer’s position on the phenomenon of incorruptibility.

According to Cruz, Lambertini ruled “that the bodies of saintly persons that are found intact, but disintegrated after a few years, could not be considered miraculous preservation.”

“The only conservations he was willing to consider extraordinary are those that retain their lifelike flexibility, color and freshness, without deliberate intervention, for many years following their deaths,” she noted.

Cruz’s book documentedcases where this has happened, such as that of St. John of the Cross, who died in 1591 and whose body, she wrote, “is still perfectly supple.”

More recent saints have also exhibited this phenomenon, such asSt. Charbel Makhlouf, a Lebanese monk who died in 1898.

Other miracles also occured around the time of St. Charbel’s exhumation from his dirt grave, a few years after his death. One was the presence of a fragrant scent, a common phenomenon with incorruptibles. A bright light also emanated from St. Charbel’s grave after his death, prompting devotees of the holy monk to ask for his remains to be examined.

A common objectionto the belief in incorruptibilityis that the body must have been either deliberately preserved, a practice since ancient times, or that the conditions of the grave or tomb allowed for natural preservation.

In at least one case, modern scientific examination has found that a saint previously believed to be incorrupt was likely not.

According to a 2001articleby Heather Pringle, a Church-sanctioned investigation by Italian scientists in the 1980s found that the 13th-century Tuscan saintMargaret of Cortonahad received extensive embalming and other intervention after death.

The scientists also uncovered documents which showed that the embalming had been requested by devotees of the saint, a patron of reformed prostitutes.But after the passage of years, the fact had been forgotten, and her appearance led people to believe it was miraculous.

The evidence had been covered by her clothes, and out of a sense of modestya full examination of her body had not been carried out forcenturies.

The same scientists, however, could find “not a trace of human intervention” on another 13th-century saintand well-known incorruptible in Italy, St. Zita.

Cruz argued in her book that some deliberate preservation after death does not exclude the possibility that the cadaver could still exhibit a miraculous condition many years after death.

She acknowledged that about 1% of the 102 incorruptibles she identified had received some intervention. Many others, however, certainly had not, as they belongedto religious orders which did not allow it.

She also rejected the idea that many cases couldbe explained by natural mummification, citing the lack of rigidity or hardness of the bodies, the normal condition of mummified corpses.

As evidence, she documented the conditions in which many of the saintly people had been found, such as in dirt graves or wood coffins with significant decay and deterioration. St. Charbel’s body, for example, was found floating in mud.

These were not conditions conducive to mummification, she argued.

At one time, the Church would accept a candidate for sainthood’s incorruptibility as one of the miracles required for canonization. This practice eventually fell out of use, because being incorrupt after death is not a requirementfor being declared a saint in the Catholic Church.

And many of the saints and blesseds whose remains have followed the normal process of returning “to dust” have been displayed for public veneration using figures or silicone masks, as inthe caseof Carlo Acutis.

We see Carlo “again in his mortal body,” Bishop Sorrentino said at a Mass for the opening of the 15-year-old’s tomb Oct. 1.

“A body that has passed, in the years of burial in Assisi, through the normal process of decay, which is the legacy of the human condition after sin has removed it from God, the source of life,” he said. “But this mortal body is destined for resurrection.”