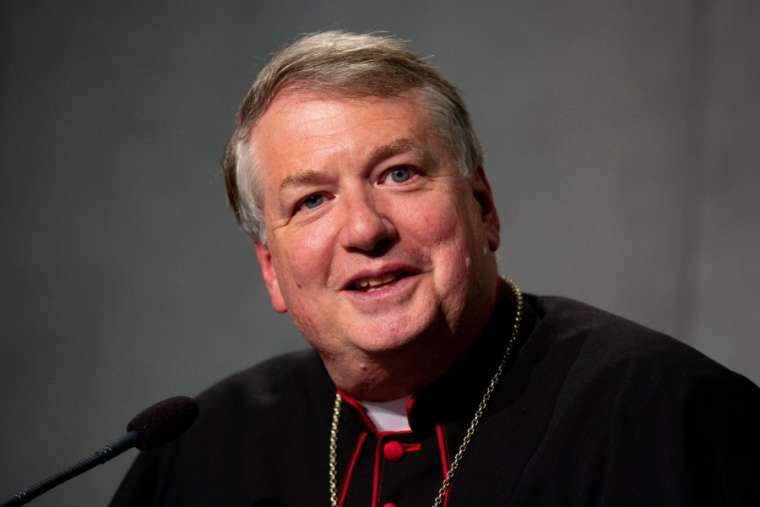 The Archbishop of Sydney, Australia, has called on the country’s government to fund an ethical coronavirus vaccine not derived from the cells of aborted children.

Archbishop Anthony Fisher, OP, joined the Anglican Archbishop of Sydney Dr Glenn Davies and the Primate of the Greek Orthodox Archdiocese of Australia, Archbishop Makarios, in signing a letter to the Australian government on August 20.

They expressed their concerns that a vaccine to be distributed by the government for the new coronavirus “will raise serious issues of conscience for a proportion of our population,” while noting that it “may be sufficiently remote from the abortion that occasioned the derivation of the cell-line.”

In a Monday column for The Catholic Weekly titled “Let’s not create an ethical dilemma,” Archbishop Fisher called on the Australian government to fund the distribution of an ethical vaccine for the new coronavirus.

“I’m a strong advocate of vaccinations – and not just for COVID-19 – as long as they are safe and ethically obtained,” the archbishop wrote. “There are ethically untainted alternatives: let’s pursue those.”

Last week, the Australian government signed a $24.7 million agreement with the pharmaceutical company AstraZeneca to distribute a COVID-19 vaccine to Australians once it is developed. The vaccine candidate, which is in the clinical trials phase, is being developed with the University of Oxford.

It is also one of several leading COVID vaccine candidates to use the cell-line HEK-293, which is “cultured from an electively aborted human foetus,” as Archbishop Fisher said. The U.S. government has also partnered with AstraZeneca for the distribution of the vaccine once it is developed.

Fisher noted that if the vaccine is fully developed and made available in Australia, “it will be ‘as near to mandatory as possible’” and people will face significant pressure to receive it.

The country’s health minister Greg Hunt has reportedly suggested that people who refuse the vaccine could face withholding of government assistance or childcare or kindergarten enrollment for their children.

“I, for one, don’t think it would be unethical to use this vaccine if there is no alternative available,” the archbishop wrote, adding that “[t]o do so would not be to co-operate in any abortion occurring in the past or the future.”

However, he urged the Australian government to pursue an ethical alternative.

In response, deputy chief medical officer Nick Coatsworth said that “the reality for the vaccines is that they need cell cultures in order for us to grow them,” and that “strong ethical regulations” exist in vaccine development. Furthermore, Coatsworth said that the Oxford University researchers can be trusted to have abided by ethical standards, as reported by The Guardian.

Following Fisher’s column, he posted on Facebook on Monday evening that his comments had been “misrepresented” by some members of the media.

“I have not, nor would I, call for Catholics to boycott the vaccine if it became available,” he wrote.

Rather, he said, he and “other faith leaders” had asked the prime minister to seek out other vaccine candidates as well that would satisfy the ethical concerns of some faith communities.

The Oxford University/AstraZeneca vaccine candidate is one of the leading COVID-19 candidates in development, and one of several that uses the controversial HEK-293 cell line. Other candidates, such as those being developed by the company Sanofi Pasteur, do not use the HEK-293 cell lines.

Pope Francis last week called on countries to help ensure that new coronavirus vaccines are “universal and for all” rather than “the property of this nation or another.”

The Vatican document Donum Vitae said regarding the use of fetal tissue of aborted babies in research, that “The corpses of human embryos and fetuses, whether they have been deliberately aborted or not, must be respected just as the remains of other human beings,” and that “the moral requirements must be safeguarded that there be no complicity in deliberate abortion and that the risk of scandal be avoided”

The 2008 Vatican document Dignitas Personae said that researchers have “a duty to refuse to use such ‘biological material’ even when there is no close connection between the researcher and the actions of those who performed the artificial fertilization or the abortion. Parents, however, could justify the use of vaccines developed from aborted fetal cell lines for “grave reasons.”

In 2017, the Pontifical Academy for Life addressed the topic again, saying that “the cell lines currently used” in common vaccines “are very distant from the original abortions and no longer imply that bond of moral cooperation indispensable for an ethically negative evaluation of their use.”

Furthermore, the statement noted that “the moral obligation to guarantee the vaccination coverage necessary for the safety of others is no less urgent, especially the safety more vulnerable subjects such as pregnant women and those affected by immunodeficiency who cannot be vaccinated against these diseases.”