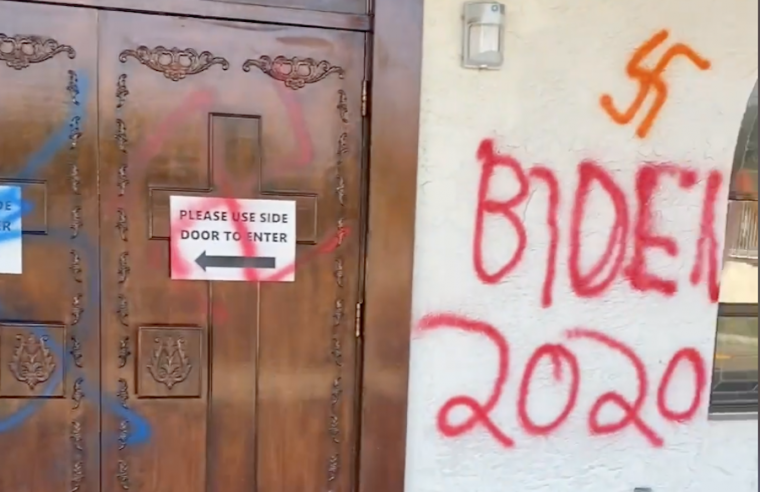 A Catholic cathedral in California was defaced overnight, with swastikas, an upside-down cross, and other messages spray-painted on the church’s doors and entryways.

“This morning our beloved Cathedral was defaced with pentagrams, upside down crosses, white power, swastikas, BLM, etc. It reminds us to pray for my brethren in Iraq that are facing persecution. Pray for the criminals who did this,” St. Peter’s Chaldean Catholic Cathedral in El Cajon, California said in a statement posted on Facebook Sept. 26.

The cathedral is the seat of the Eparchy of St. Peter the Apostle of San Diego, an Eastern Catholic diocese of roughly 70,000 Catholics.

A video posted by the cathedral on Facebook showed numerous symbols spray-painted on the church’s edifice and doors: swastikas, “White Power” and “WP,” alongside upside down crosses, “BLM,” standing seemingly for Black Lives Matter,” and “Biden 2020.” Some symbols were indecipherable, others represented slogans or ideologies not ordinarily associated with each other.

The vandalism comes amid a spate of similar incidents at Catholic churches that has lasted for months.Earlier this week a man burned pews in an arson attack in a Florida Catholic church, anda man with a baseball bat damaged a crucifix and several doors at a Texas seminary.

Last weeka statue of the Sacred Heart of Jesus was destroyed in a Texas cathedral.

Also last week, a parish in Midvale, Utah, saw back to back attacks. St. Therese of the Child Jesus Catholic Church had its namesake statue beheaded followed by burglary on subsequent nights.

“Sometime last night our statue of St. Therese of the Child Jesus outside of the Main Church was broken and vandalized. We are currently in contact with the police,” the parish wrote on its Facebook page on Monday, September 14. The statue was pushed off its pedestal and the head was broken off. A planter by the statue was also smashed.

The parish urged people to “pray for the person who did this, that they may get the help they need,” and said the vandalism was an “unfortunate situation.”

On Tuesday, the parish once again reported vandalism.

“As an update to our parishioners, we are upset to report that one of the houses on our parish property was vandalized and broken into last night,” said the parish in a Tuesday post to its Facebook page.

A historic church built by St. Junipero Serra was burned in California this summer, in a fire being investigated as arson. A Florida man was arrested for setting flame to a parish church in the Orlando diocese.

Fires have been started and statues of Jesus, Mary, and saints have been beheaded or destroyed at parishes across the country, while in California numerous public statues of St. Junipero Serra have been torn down, defaced, and destroyed.

While some attacks on statues have been committed by large groups with clear political affiliations, the perpetrators ofother actshavenot been identified.

The eparchy could not be immediately reached for comment.