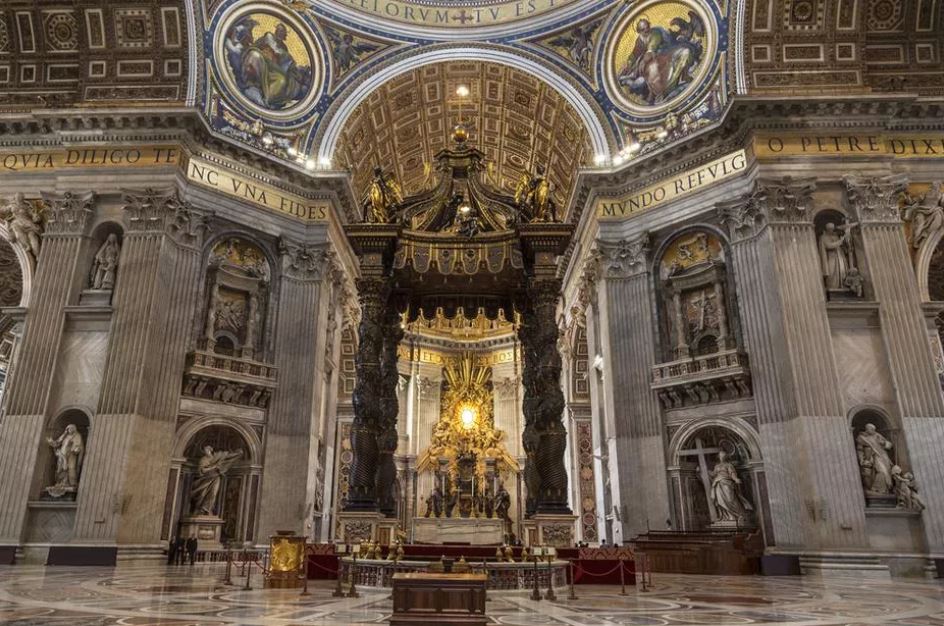 The Nov. 18 feast of the dedication of the Roman basilicas of St. Peter in the Vatican and St. Paul Outside the Walls is a fitting occasion to think about holy places, their dedication — and this year, sadly, their desecration, which has become all too frequent.

Dedication anniversaries are often not observed, but the Church’s liturgical calendar — the marking of sacred time — gives a high priority to churches — sacred places. The consecration of an altar and the consecration of a church are among the most beautiful ceremonies in the entirety of the liturgical rites.

The celebration of dedication feasts reaches back to the liturgical life given by God to ancient Israel, which was anchored by sacred time, the Sabbath, and sacred place — the Temple in Jerusalem. It is possible that the dedication of the Temple by Solomon (1 Kings 7-8) was the most physically extravagant liturgical act in the history of humanity.

How seriously does the Church take the consecration of sacred places for the right and fitting worship of God? A clear indication is given when those places are desecrated. Severe consequences follow. Consider the following from recent months.

· Also in September, Bishop Gerard Bergie of the Diocese of St. Catharines, Ontario, requested that Catholics offer prayers of reparation for one month after the tabernacle was stolen from his cathedral and dumped in a canal. “The Blessed Sacrament has been desecrated and our Eucharistic Lord has been harmed at the hands of thieves. When this happens, the Church in her wisdom asks that we make reparation for the harm that has been done.”

· In October, Archbishop Salvatore Cordileone of San Francisco conducted an exorcism at St. Raphael Catholic Church after a statue of St. Junipero Serra was sacrilegiously toppled.

· Also in October, perhaps the most sickening desecration imaginable took place in St. Peter and Paul parish in New Orleans, where the pastor and two women filmed themselves committing obscene acts on the altar. An enraged Archbishop Gregory Aymond ordered that the altar be removed and burned, and consecrated a new one for the parish church. (The priest will never again be permitted any ministry, Aymond announced.)

· Following the terrorist beheading in the Basilica of Notre-Dame in Nice, France, in the days leading up to All Saints and All Souls, the bishop led a solemn chanting of the De Profundis.

In recent weeks, there have been desecrations of churches and statues in France, Malawi, the Philippines, Poland and Argentina. It is a global phenomenon.

Just as there exist careful rites for the dedication of sacred places, so too there are liturgical rituals and pious actions prescribed when those holy places are desecrated, to make reparation and purify them again for holy purposes.

When “sacred places are violated by gravely injurious actions” that, in the judgment of the bishop, are “grave and contrary to the holiness of the place” it is “not permitted to carry on worship in them until the damage is repaired by a penitential rite” according to the Code of Canon Law (1211).

Just as a soul can be damaged by sin and need restoration through the sacraments, so too the “soul” of a sacred building can be desecrated and need a rite of healing.

For most ordinary Catholics, priests and laity alike, who are spared the phenomenon of desecration, dedication feasts and reparation rituals are reminders for us to honor our own altars and churches. This includes routine things — like keeping the altar uncluttered with extraneous items, the sanctuary in good order and linens and vessels clean — to thinking about what we put on the altar.

An example: Some years ago I was celebrating a wedding in another parish. At the rehearsal I asked the sacristan for a table upon which to sign the parish wedding register and the government marriage license. She replied that the priests there usually did it on the altar. I said that I would permit the parish record to be signed there, but that it was not proper to put Caesar’s documents on the altar of God. She immediately agreed and we quickly found an suitable table.

Tacky and ugly things also have no place on the altar of God, which means that pastors have to be attentive to liturgical books, vessels and vestments — and the vesture of those laypeople in the sanctuary. They too need to be vigilant about what is fitting for the “holy of holies,” to use a biblical term for the Temple. I tend toward the extreme in such matters, and abhor even the common practice of employing photocopies assembled in binders instead of using the proper liturgical books. But I like to think that Solomon was an extremist in such matters too.

God can draw good out of even great evils. A suitable prayer for dedication feasts might be to ask that the current wave of desecrations bring forth a compensating renewal of reverence for the house of the Lord, and the altar of God.
Share With:
Previous Article

Two Churches in Washington State B...