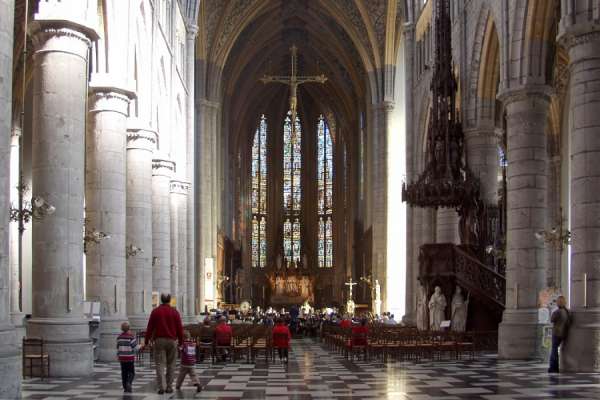 The new figures also showed that significantly more Belgians attended Mass at Christmas in 2019 than in 2018. The report said that 551,134 people went to either Midnight Mass or a Christmas Day Mass last year, compared to 509,000 in 2018.

These increases were among the bright spots in an annual report on the Church’s activities in 2019. The 116-page publication found that baptisms, First Communions and confirmations all declined, as did weddings and funerals.

The report also said that more than half of Belgium’s 2,167 diocesan priests were over 75 years of age.

Although the majority of Belgium’s 11.5 million population are baptized Catholics, Sunday Mass attendance is below 7%.

But in August, the Belgian Church reported a significant rise in adult baptisms in 2020.

CathoBel, the website of the Catholic Church in Belgium, said that 305 adults would be baptized this year, an increase of 61 compared to 2019.

Belgium is among the European countries to have suffered most from the coronavirus outbreak. In March, the Church was forced to suspend public Masses, though churches remained opened for public prayer.

In an introduction to Wednesday’s report, Cardinal Jozef De Kesel wrote: “The coronavirus epidemic has taken a toll on our society. We have experienced our fragility within our parish communities. We don’t have mastery over everything. Many certainties have been and are still being shattered.”

De Kesel, the archbishop of Mechelen-Brussels and president of the Belgian bishops’ conference, continued: “We had a foretaste in the absence of celebration during Holy Week. There was also, for a while, the absence of Mass, as well as funerals celebrated without family members and friends.”

“As for Communions and confirmations, they were simply postponed. For many this was a real deprivation. This shows the social importance of the Church. This also testifies to the existential significance that it has for many people.”