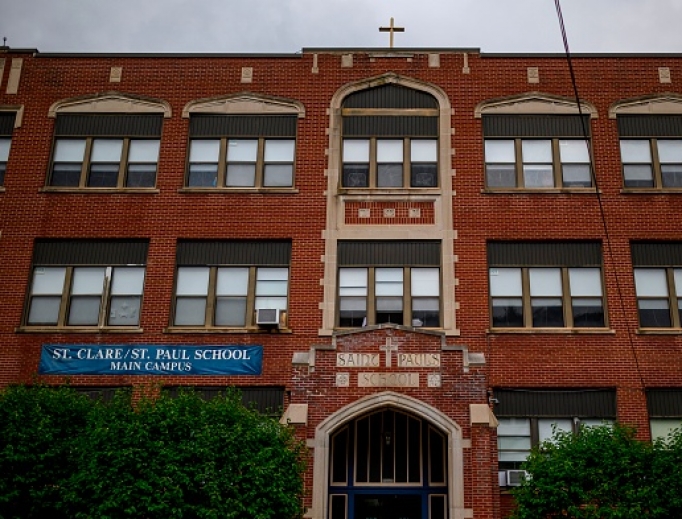 Proponents say the November election’s outcome will determine the future of many schools.

Politicians like to say a child’s zip code shouldn’t determine his or her future, but what they propose to do about that can differ vastly, especially for students who attend Catholic schools.

Whether it’s aid for schools in the latest coronavirus relief bill or the education planks of presidential and party platforms, political leaders who claim they want to help children often draw the line at assisting those who happen to go to private schools. Instead, their solutions focus on getting more money to public schools, leaving students in private schools, even ones in poor zip codes, to fend for themselves.

At a time when the effect of the coronavirus on schools has heightened awareness of education, such differences are important considerations for voters, especially those with ties to Catholic and other private schools.

“The issue of education is extraordinarily important in every election, but in this election, it will be even more pronounced,” Brian Burch ofCatholic Votetold the Register. “It will not simply be an issue for Catholics, as it often has been in the past, but also many others who are finding Catholic schools places of refuge in light of the limitations imposed by public-school systems because of the pandemic.”

Indeed, Ashley McGuire, senior fellow forThe Catholic Association, said Catholic schools have stood out because of their efforts to reopen after the coronavirus shutdown while many public schools are remaining closed, often because of pressure from teacher unions.

“It has intrigued people that Catholic schools are trying to open,” she said. “It’s showing how committed they are and how free they are from the politics of teacher unions.”

In the Washington, D.C., area where McGuire lives, she said Catholic schools are some of the only schools that are reopening, though often with limited staff and resources.

McGuire said she can’t remember the last time an issue affected everybody regardless of socioeconomic status: “This policy issue is directly impacting families right now … and working against reopening schools are the public-school unions.”

She added that the situation has presented an opportunity to remind people that Catholic schools are unique in the world of private and independent schools, in that they serve primarily low-income and middle-class families seeking good alternatives to often-failing public schools, with 40% located in inner-city communities. Yet many operate on a shoestring budget while achieving educational outcomes that are the envy of all schools in terms of graduation rates, entry into colleges and successful STEM programs.

McGuire said, “They clearly exist for the students.”

Still, many political leaders continue to resist any form of aid to students in Catholic and other private and religious schools.

Although both Republicans and Democrats agree the latest coronavirus relief package should include funding for schools, the two sides have parted ways over a Republican proposal to designate 10% of any allocation for public schools to go to private and religious schools. Republicans also want to provide Education Freedom Scholarships for which federal tax credits would be available to donors to the scholarship programs. Both are aspects of a plan put forward by the Trump administration.

Jeanne Allen of theCenter for Education Reformsaid although the tax-credit aspect in the stalled bill appears unlikely to succeed, there is still some hope that private schools could get 10% of whatever public schools are given. How that money could be used is unclear, although given it would be distributed to states, governors may have some flexibility in determining its application.

However, Catholic Vote’s Burch said, “Given the deep hostility of the Democratic Party to Catholic education in part because of their deference to public-school teachers’ unions, it is not a surprise that Catholic schools may once again be given scraps, despite their critical role in providing education for millions of children, Catholic or otherwise.”

According to the National Catholic Educational Association (NCEA), more than 21% of the 1.7 million students enrolled in Catholic schools are racial minorities, and 19% are non-Catholic.

“It’s a scandal,” Burch said, “that there is not the political support needed to help these children.”

The partisan divide over coronavirus relief funding for Catholic-school children is likewise evident in the differences between President Donald Trump and Democratic challenger Joe Biden.

Although both candidates claim to want to invest in education, Burch said, Trump’s support of tax-credit scholarships and his willingness to put cash in the pockets of families to direct the education of their children almost mirror Catholic teaching that parents are the primary educators of their children.

He said, “President Trump could accurately be described as the most pro-Catholic education president in American history.”

By contrast, Biden’splan for K-12 educationappears to be focused almost exclusively on public schools. It includes a proposal to “build the best, most innovative schools in the country in low-income communities and communities of color,” but fails to acknowledge that many such schools already exist in these communities as private or charter schools.

The Center for Education Reform’s Allen said Catholic and other religious schools as well as charter schools individually support and nurture students in such communities, often with smaller learning environments tailored to students’ needs and offering flexibility, freedom and a mission-centric focus.

Yet, she said, “Biden thinks equalizing funding to public schools overcomes zip-code challenges, which it doesn’t, and that really is the fundamental difference between most Democratic and Republican candidates on the national level year after year.”

Although Biden and his sons have attended Catholic schools, heopposesvouchers and other school-choice programs, believing that sharing public funds with parents of students who go to private schools would “undermine the entire public-education system.”

Trump, on the other hand, supports school choice and has called itthe civil-rights issue of the decade.He also withstood opposition from Biden in supporting Catholic schools participating in the Paycheck Protection Program, which provided forgivable loans that allowed many to survive the coronavirus shutdown. More than 130 Catholic schools in 23 states have closed since the shutdown, according to the Alliance for Catholic Education.

Allen said she would like to think that in the current environment, Catholic education will be a critical issue for voters in the November election, but she is concerned that frustrations over school reopenings in general could cause people to think more in terms of getting their children back to school rather than which school they are attending.

“Politically, I don’t know that enough parents and voters understand the challenge that Catholic schools have faced with COVID and that they really are tracking the behavior of policymakers who have not been sympathetic to their plight,” Allen said.

Nonetheless, she said, the distinctions between parties and candidates are likely to drive voting behavior for Catholics who understand them. “I just don’t sense that the majority of Catholics are engaged politically to know the difference between who’s supporting them on the local, state and national level and who’s not.”

To bring about change, Allen said, will clearly take more political involvement on the part of Catholics who are willing to protect their institutions and demand that equitable resources are distributed. However, she said, Catholic voters are likely not informed and politically involved because schools and churches have not done their part to raise awareness and activate parents and parishioners. “I imagine a huge percentage of Catholics don’t even know that Catholic education could be supported by a relief bill if they spoke out.”

Allen said although the U.S. bishops have been more aggressive individually in response to the latest coronavirus relief bill, she does not think that as an organization they have been as outspoken as they could and should be. “There are a handful of leaders of the Church who have made a big deal of the inequities being foisted upon Catholic schools, but unless you’re on the receiving end of that bulletin, your voter behavior is not likely to change much.” The USCCB did not respond to an interview request from the Register.

“Political behavior is driven by pressure politics,” Allen said. “We need savvy, choosy voters to ensure that Catholic education is not only valued in public policy but supported.”

The Biden Platform: What Catholics...