Catholic Funerals Continue, But COVID-19 Adds Another Layer of Grief 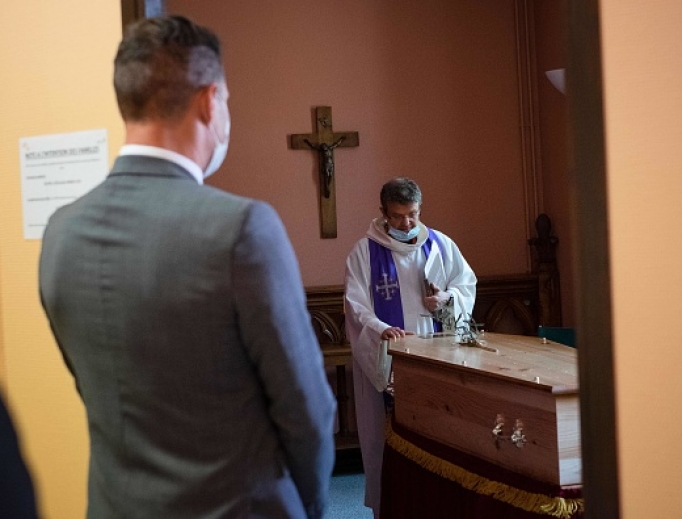 Catholic Funerals Continue, But COVID-19 Adds Another Layer of Grief

Traditional funeral celebrations have been stymied by restrictions imposed to stem the disease’s spread.

Time waits for no man, and neither does death — especially during these times of the coronavirus epidemic, which has claimed more than 65, 000 lives to-date. Yet, like other aspects of the sacramental life in the Catholic Church, traditional funeral celebrations have been stymied by the restrictions imposed in attempts to stem the spread of the coronavirus (COVID-19).

For Catholics, the funeral is, as the Catechism of the Catholic Church states, “a liturgical celebration of the Church. The ministry of the Church in this instance aims at expressing efficacious communion with the deceased, at the participation in that communion of the community gathered for the funeral, and at the proclamation of eternal life to the community” (1684).

During the current pandemic, however, these expressions have become somewhat muted due to social distancing and prohibitions of public gatherings. Nonetheless, pastors and others who are grieving the loss of loved ones are continuing to bury the dead with the prayers and blessings of the Church and, for immediate family members and pastors, by attending to the same sort of abridged liturgies that the Church universal has become accustomed to in these times.

But even as those who are suffering most face unique challenges in communing with the dead, the wider community, and Christ himself in the sacraments, they are also finding opportunities to renew their understanding of the Church’s view of death — not as an end, but as an entrance into new life with God, as the Catechism says, “the fulfillment of [the Christian’s] new birth begun at Baptism” (1682).

For Donna Khattar of San Antonio, Texas, whose father died March 31, this celebration of “new life with God” had to take place at a distance. James Sladky, 92, a graduate of the Naval Academy and a physician, died of causes unrelated to COVID-19 in Marathon, Wisconsin. Marathon County Health Department currently reports only 18 confirmed cases and one death from coronavirus in Marathon County.

Khattar was unable to attend her father’s funeral because she has a high risk of coronavirus infection due to a kidney condition that has compromised her immune system.

“I’m just one of those people who would probably be hospitalized if I got the virus, because of my health issues,” she told the Register, noting that she’s been mostly sheltering in place during the outbreak.

According to Khattar, who is a registered nurse, only her mother and five siblings and some of their spouses were able to attend her father’s funeral Mass. When she first heard that her father had died, she had no thought but to buy an airline ticket and fly to Wisconsin to be with her family. But after some phone conversations with her siblings — most of whom also work in the health care profession as either doctors or nurses — she agreed it would be best if she stayed home.

“My sister, who is also a registered nurse, changed my mind,” Khattar said. “She asked me, ‘What do you think Dad would say?’ As a physician, he’d probably tell me not to go, and my mother already told me she didn’t want me to come up, saying she was going to be worried and stressed about me the entire time. So I thought, okay, I didn’t want to do that to my mother.”

James Sladky’s funeral included all three elements of a traditional Catholic funeral: a wake, a Mass for the dead, and a committal service. But each of these parts of the funeral took place under restrictions similar to those experienced at funerals around the country at this time.

The private Mass, celebrated by the Sladkys’ pastor in Wisconsin, was restricted to family members only. (A public memorial Mass is planned for her father in August at his parish in Marathon.) During the wake, only eight people at a time were allowed to view the remains and there were also a limited number attending the graveside committal.

To exacerbate matters, these elements of Sladky’s funeral were shuffled around because of current circumstances in Wisconsin, Khattar said.

“My dad died on a Tuesday,” she said. “There was a Mass on Saturday morning [April 4], and then Monday [April 6] they did the wake, and then on Holy Thursday [April 8], before Easter they did his burial. It was difficult to get it all done at once because of the restrictions. We can’t even order a tombstone for him yet because the monument businesses aren’t open. So we only have a marker on the ground with his name on it.”

At the same time, according to Khattar, her pastor in San Antonio offered a private Mass for her father and Khattar and her husband Jason and their three children came together to pray for her father’s soul and for the rest of the Sladky family.

“We prayed as a family and did the Chaplet of Divine Mercy — which was a prayer that my dad loved, and we continue to do it daily,” Khattar said.

“It was fitting that we chose that prayer,” Jason Khattar added, “because Dr. Sladky had passed around the time to start the Divine Mercy novena [traditionally begun on Good Friday in preparation for Mercy Sunday]. It wasn’t a part of our nightly prayers, but now it is.”

If a Catholic medical family such as the Sladkys know how to weigh the risks of COVID-19 against the spiritual and emotional needs of the family, then Father Michael Klos similarly understands how to strike the right balance in current circumstances. His father, Edward Klos, also died during the pandemic restrictions (from causes unrelated to the virus).

Klos, 79, of Westby, Wisconsin, a retired high school science teacher and active carpenter in his retirement, died on Monday of Holy Week, April 6 — two days before his 80th birthday. The health department for Vernon County, in which Westby is located, reports only one case of coronavirus and no deaths.

Edward Klos’s funeral service was celebrated by his son at Edward Klos’s parish, St. Mary’s in Viroqua, Wisconsin, but since it took place on Holy Thursday, there was no funeral Mass (the Chrism Mass and Mass of the Lord’s Supper are the only Masses to be celebrated on this day during Holy Week). Although his father’s service was live-streamed on Facebook, Father Klos said, current restrictions kept attendance numbers to immediate family, St. Mary’s pastor, and four close family friends — seven in all. (The Klos family is planning a memorial Mass for his father for some time after the restrictions are lifted in the state.) There was no wake, however, except for a private viewing by the immediate family, Father Klos said, and the committal at the graveside, occurred the same day as the funeral service, but also included a minimum number attending.

Father Klos was the only one of his siblings to attend his father’s service — he has two brothers, and a sister (another sister preceded her father in death). While he missed their presence he understood that, because of the coronavirus restrictions, they couldn’t travel.

“My brothers and sister all live a way’s away,” he said. “My sister is compromised health-wise, and my two brothers — one lives in Milwaukee, which is the ground zero for Wisconsin, and the other one lives out of state.”

Father Klos and his mother also felt the absence of the community which was very much a part of his father’s life.

“One of the toughest things about funerals for anyone at this point is that the community isn’t able gather on the one hand to honor the memory of the person who has died but then also together to commend him to God,” Father Klos said. “So that leaves a hole for the people who are going through this. The best we can do as priests is walk with them as best we can in these times and help them to get through that.”

Father Klos serves the faithful in a rural part of the country, but for priests such as Father Joseph LoJacono, who serves an inner city parish, St. Veronica’s, in Philadelphia, the challenges of providing for the living and the dead are more acute.

A native of the Washington, D.C. area, Father LoJacono is a priest of the Institute of the Incarnate Word, which was founded in Argentina in 1984.

The Philadelphia Department of Public Health currently reports 13,445 cases and 516 deaths attributed to coronavirus. At least two parishioners at St. Veronica’s are among those reported deaths, Father LoJacono said.

“We are kind of a hot spot for the virus,” he said, “Temple Hospital [which is one of the most active locations for treatment in the city] is literally within walking distance of the church.”

Funerals remain a regular part of parish life, Father LoJacono said, but they’re almost always celebrated in funeral homes instead of in the parish church.

“I’ve been doing one funeral a week here at St. Veronica’s,” he told the Register, “but we haven’t done any in the church… So we just have the funerals in the funeral homes. That’s where I’m doing almost all of them now except for a funeral I had recently in the church.”

Part of the pastoral challenge in dealing with coronavirus deaths in the parish is finding ways to comfort families, Father LoJacono said.

“One person lost her mother to COVID-19 and she was trying to process that and the funeral home she was working with — not one used by our parish — said they would only do cremations and couldn’t do any kind of religious service right now,” he said. “This person asked how she can process these things. ‘There’s no place I can go,’ she said. ‘What can I do?’”

According to Father LoJacono, the parishioner attended a private Mass he offered for her mother, but she wished she could receive the Eucharist more regularly.

“It was a sort of highlight of the confusion and anxiety that people are facing and have to work through when they don’t have normal access to the sacraments,” he said. “She was appreciative that I reached out to her and she could have a Mass, and also I arranged for the Legion of Mary to do a novena of Rosaries, and yet she still seemed to be trying to work through things.”

Even though Catholic funerals have become uncomfortably streamlined during this time, Father LoJacono noted that those grieving should continue to celebrate the resurrection during this Easter season —the same resurrection announced by the Church in her funeral liturgies.

“There is in the Catholic funeral rites the hope of heavenly realities,” Father Joseph said. “So it’s a hopeful message that this is not the last word — the saints are leading those who died in Christ to the hope of those heavenly realities. We must trust in the Lord Jesus that he has a plan. That plan for each of us passes through the cross to get to the resurrection.”

Even when the liturgy itself cannot be offered, Father Klos said, the Church at prayer remains the greatest single act of consolation for those grieving and greatest act of charity for those who have died, as he found when talking to other priests about how they manage funerals in these times.

“I’ve had brother priests who had funerals during this time and others who would hold off until the entire family could get together,” he said, adding that as with much of the Church’s public prayer these days, “you can only do what you can do. The prayers and the offices for the dead are important, and that’s why we bury people in relatively close proximity to their death, because we’re burying them in the hope of resurrection.”