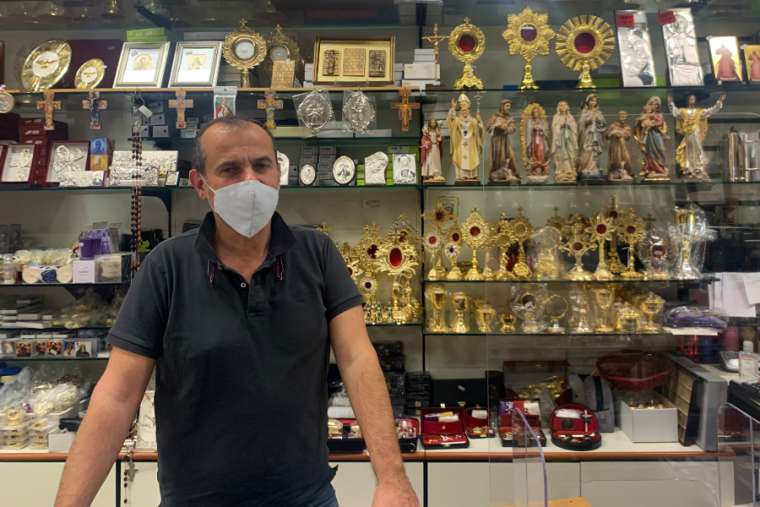 Walking toward St. Peter’s Square, one sees sign after sign posted on the closed doors of religious gift shops and other local businesses with large red letters stating: “Without help from the government, we cannot reopen.”

For the few shops near the Vatican that were able to reopen May 18 as Italy eased its coronavirus lockdown restrictions, business has been painfully slow.

Small business owners told CNA that they had been forced to find creative and sanitary ways to keep their shops — many of which have been in the family for decades — going despite the crisis.

Massimiliano Nanni owns a religious gift shop named Borgo Shop located just outside of the walls of Vatican City. The shop, founded by his mother nearly 40 years ago, sells rosaries, religious medals, priests’ vestments, and a myriad of liturgical items.

“There have been very few people, really, very few. There is almost no value in opening,” Nanni told CNA the week that the Italian government permitted his business to reopen after two months of lockdown.

“We need to have a lot of patience,” he added.

As Italy’s coronavirus death toll rose in March, the Italian government forced all non-essential businesses to close from March 12 to May 18.

The suspension of public Masses during Italy’s lockdown has also had further repercussions for these sacramental shops and their suppliers.

Catholic store owners said that the nearly 70-day closure hit them hard because Easter is typically one of their busiest times with peak sales.

Nanni said that he received 600 euros in aid from the Italian government, but this was nothing compared to what he lost because of the forced closure in March, April, and May.

He said that he was thankful that his landlord hadbeen patient, not demanding the rent right away, but noted that other shops have faced a much more difficult situation.

“Slowly it will get better, but to recover business as it was we will need to wait until at least Easter of next year,” Nanni said.

Laura Mancinelli, who runs an ecclesiastical tailor shop, Mancinelli Clero, which has been in the family for more than 50 years, told CNA that much of their business during this time has had to shift online.

“Working online is the most important thing because you can still make and receive orders and make shipments,” Mancinelli said.

However, Nanni said even his online business also saw a downturn during the extended suspension of public Masses in Italy. When the churches were closed, the hosts and wine and other liturgical supplies were not being sold, he explained.

In Italy, many liturgical celebrations, such as first communions, have been postponed until next year. This also affects Nanni’s business and his suppliers.

Both Mancinelli’s and Nanni’s businesses reopened on May 18 as soon as the Italian government permitted reopening. But they have had to work under some challenging new restrictions.

“Among other things, here in Rome, we can only be open from 11 a.m. to 7 p.m. In this neighborhood, this is not good because the priests come early in the morning [to offer Mass in St. Peter’s Basilica], so opening at 11 is too late,” Mancinelli said.

In the afternoon she said that barely anyone passed by her shop as Italy’s borders remain closed.

“Unfortunately there is very little work because there are very few people,” she said.

Nanni showed off the new clear plastic barrier he has installed in front of his cash register, and explained his shop’s safety measures to prevent the spread of the coronavirus.

“We have markings for distancing. We have sanitizer for cleaning your hands. If you want to touch the merchandise, we also have gloves. For the clothing, if you want to try it on we will also sanitize them each time that they are tried on,” he said.

Mancinelli said that the ecclesiastical tailor shop is going to sell customized face masks with embroidered names and liturgical fabrics.

Both shop owners said that they look forward to when Italy will reopen its borders as pilgrims and visiting priests are some of their primary customers.

After three months of lockdown, the Italian government is expected to open its regional and international borders on June 3. However, only tourists from Europe’s Schengen area countries will be allowed to visit. It has yet to be announced when Americans and other foreign visitors from outside of the European Union will be allowed to return to Italy for vacation.

“The tourists — we hope that they will return soon! We want them, but I really understand that we need to have patience,” Nanni said.

Vatican archives will reopen to sc...