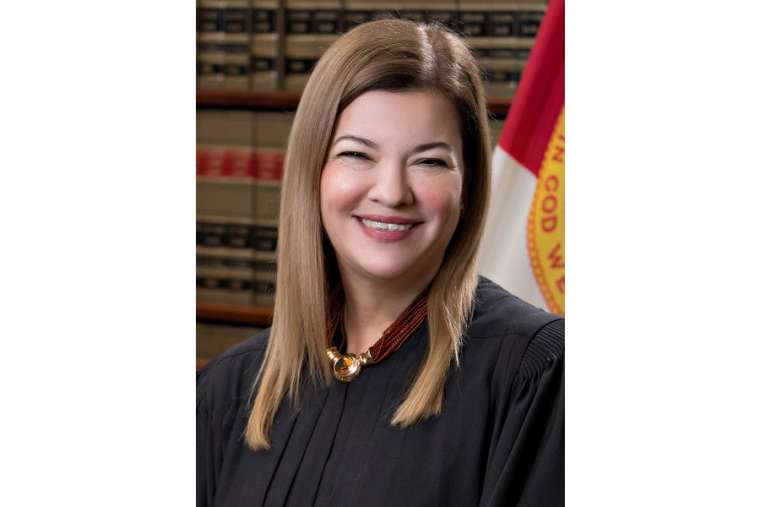 President Donald Trump’s shortlist of potential nominees to the Supreme Court includes Judge Barbara Lagoa, a Catholic who has spoken about how her faith has shaped her legal career.

Lagoa, 52, was born in Miami and is the daughter of Cuban immigrants. Trump appointed Lagoa to the U.S. Court of Appeals for the 11th Circuit in Atlanta in late 2019. She had previously served as a Justice on the Florida Supreme Court, the first Hispanic woman to do so.

President Donald Trump announced Monday that he would announce a nominee by Sept. 26 to replace the late Supreme Court Justice Ruth Bader Ginsburg, who died Friday evening at 87.

Trump said that he was “looking at five, probably four, but I’m looking at five very seriously” options to replace Ginsburg. Trump had also said he will nominate a woman for the position.

Judge Amy Coney Barrett, a Catholic,is widely reported to be the front-runner in the president’s deliberations regarding a nominee, but Lagoa is also on Trump’s shortlist, and Florida lawmakers are said to be advocating for her appointment.

Lagoa, who has three children, has spoken about the importance of the Catholic faith in her own life.

Speaking at an October 2019 dinner for the Thomas More Society, a Catholic lawyers’ organization, Lagoa praised the group’s namesake saint as a model for Catholic law professionals, who she said should not compartmentalize their professional lives from their spiritual lives.

“I suggest that in order to be a good Catholic advocate, one should start with St. Thomas More,” Lagoa told the attorneys. More, the patron saint of attorneys, is hailed for his commitment to his conscience and to Catholic doctrine, which lead eventually to martyrdom.

“It is more than going to Mass every Sunday, and to me at least, it means having a personal relationship with God that in turn informs how we treat others,” she said of her Catholic faith.

Lagoa also urged lawyers to ask for the guidance of the Holy Spirit, and the gifts of wisdom, counsel and fortitude, in daily life,according to the Florida Catholic.

Lagoa has also been outspoken about the importance of her own Catholic education, having attended Catholic elementary and high school in Miami.

As a Florida Supreme Court Justice, she took part in a major ruling reversing a judge’s decision striking down a Florida law that requires that people with past serious criminal convictions pay all fines, restitution and legal fees before regaining the right to vote, NBC News reported.

Lagoa is married and a mother of three.

“I think the most important thing I can tell women about their leadership roles is the thing I tell my three daughters, which is: do not be afraid of failure, do not be afraid to make mistakes, be bold, and take risks,” she said in an April 2019 interview.

“That’s the one thing I can tell you about all women who are in positions of leadership; they all have taken risks…Nothing is ever perfect. Just do it, and you will be happy that you did. Maybe you will fail initially, but failure also leads to learning.”

Since Justice Ginsburg’s death last week, pro-life and pro-abortion voices have made it clear that any nominee’s stance on abortion will be a key issue. Florida Rep. Matt Gaetz has described Lagoa as “very pro-life, reliably pro-life.”

Lagoa said in written answers to the Senate upon her nomination to the appeals court that she believesRoe v. Wadeis “settled law” and that as an appellate court judge, she “would faithfully follow it as I would follow all precedent of the Supreme Court.”

“I am particularly mindful of the fact that under our constitutional system, it is for the legislature, and not the courts, to make the law. It is the role of judges to apply, not to alter, the work of the people’s representatives. And it is the role of judges to interpret our constitution and our statutes as they are written,” Lagoa said in a speech after being appointed to the Florida Supreme Court.

If the Supreme Court reversesRoe v. Wadeand removes the inferred constitutional protection for abortion, the legality of abortion would be subject to state-by-state regulation.

As many as a dozen states, including New York and California, have enshrined a right to abortion in their own constitutions. Other states, such as Arkansas, have “trigger laws” on the books that would automatically ban abortion entirely if the case were overturned.

On Saturday, Americans United for Life, a major pro-life organization, endorsed Judge Barrett and urged President Trump to nominate her.

Trump’s likely nomination of a Supreme Court Justice to replace Ginsburg has become a matter of political controversy, in an already fractious U.S. political and social context.

Democratic leaders have pushed back, and pointed to McConnell’s refusal to consider Obama Supreme Court nominee Merrick Garland in March 2016, seven months before that year’s presidential contest. At the time, Republicans said that it would be more appropriate to wait until after the November election to fill the Court vacancy.

McConnell defended his decision Friday night, saying that “in the last midterm election before Justice Scalia’s death in 2016, Americans elected a Republican Senate majority because we pledged to check and balance the last days of a lame-duck president’s second term. We kept our promise. Since the 1880s, no Senate has confirmed an opposite-party president’s Supreme Court nominee in a presidential election year.”