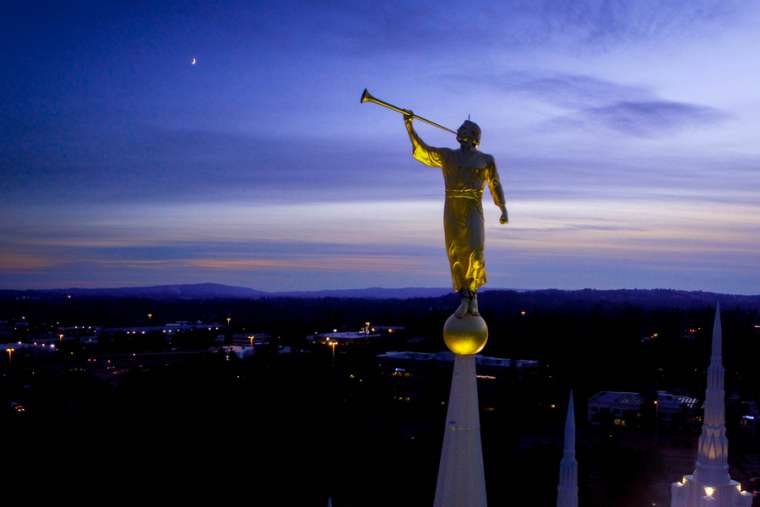 Oregon Catholic Press will reprint two of its publications in response to criticism of theartwork chosen for the cover of both editions.

The publisher made the announcement Wednesday in a Facebook post, telling its customers that it had “promised to come back to you with a solution, and here it is.” All of its 2021 Music Issue and Respond & Acclaim worship resources, which featured the controversial image of an angel by a Mormon artist, will now be reprinted.

The announcement follows sustained negative feedback since August 24, when online attention was first drawn to the image pictured on the cover of the 2021 Music Issueand Respond & Acclaim. The imagestrongly resembled the angel Moroni, a character in the Mormon faith. The cover art depicted an angel standing on a golden sphere, blowing a horn and holding a box–all of which are typical to depictions of the angel Moroni.

Initially, Oregon Catholic Press issued a statement denying that the cover art was of Moroni, and said that they had chosen the art due to the symbolism associated with an angel blowing a trumpet.

“The sounding of the trumpet at the last is a strong traditional Christian image. We chose this angel because he’s holding a trumpet and what looks like the book that will be opened at the last,” said OCP on Monday.

The press initially said that they “apologize for any misunderstanding” regarding the cover art, and said that the artist who painted the image, Jorge Cocco Santangelo, told them that the figure in the image was not of any specific figure.

It was subsequently reported that Santangelo’s own social media postings referred to the image licensed by OCP as “Angel Moroni.” The publisher issued an updated statement on Tuesday, Aug.25, apologizing for the “embarrassing mistake.”

“We have heard your concerns, we admit our error and we apologize for the cover art,” OCP said, insisting that it would “never knowingly use an image that is not authentically Catholic on our publications.”

Anyone who had already received the now-recalled publications will automatically be sent replacement copies at no cost, and any unfulfilled orders will be shipped with the new cover art, the Wednesday statement said.

“Again, we apologize for any offense this has caused, we ask for your forgiveness, and thank you for your prayers and ongoing support,” said OCP.

The Church of Jesus Christ of Latter-Day Saints, which the Catholic Church does not recognize as Christian,teaches that the angel Moroni visited Joseph Smith, and revealed the location of the hidden Book of Mormon, written on gold plates buried in upstate New York. Mormons believe that Moroni is a central figure in the restoration of the Gospel, and statues of Moroni feature prominently on the spires of many LDS temples.

Are Catholic Websites Leading You...