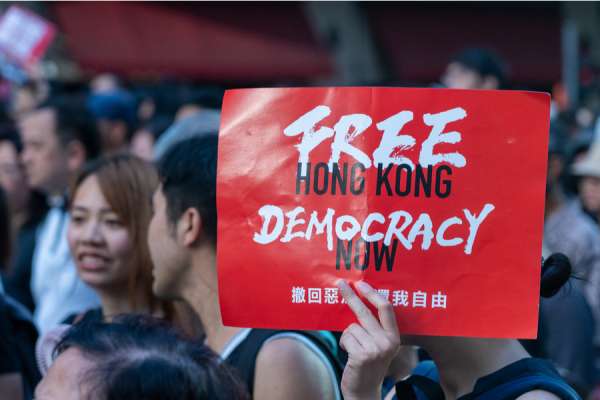 Chow, 23, along with Joshua Wong, 24, and Ivan Lam, 26, pled guilty on Monday and received their sentences. The three were arrested in August 2019 for a protest the previous June, and were arrested again this year.

Initially, only Chow was expected to plead guilty. The South China Morning Post reported that Lam and Wong decided “last minute” to change their pleas from not-guilty to guilty.

Wong said he hoped that their prison sentences would serve to bring attention to the actions of the Chinese government, which has imposed sweeping restrictions on free speech in Hong Kong following the new National Security Law brought into force in July.

Speaking before his plea on Monday, Wong criticized the “continuing crackdown against [Hong Kong’s] citizens,” saying that this meant that young people were going “from protests to prisons to safeguard liberty” for Hong Kong.

“Neither prison bars nor election bans, nor any other arbitrary power will stop us from activism,” he said. Wong and Chow were among the co-founders of a now-defunct pro-democracy political party in Hong Kong. The party ceased operation upon the enactment of the National Security Law.

Both Wong and Chow were barred from running in separate elections for seats on the Legislative Council of Hong Kong for “sedition.”

Chow said she was “feeling uneasy” about the possibility of being sent to prison for the first time, and said that the sentence meant she had an “uncertain future.”

“But I hope all of you will not forget the many people who have made bigger sacrifices than we did,” she said on Monday.

The trio will be sentenced on December 2. They face up to three years in prison.

In an interview released on social media on Sunday, Cardinal Joseph Zen, the bishop emeritus of Hong Kong, criticized Vatican silence on the human rights situation in Hong Kong and China. The cardinal said that even non-Catholics have noticed that the pope has not raised the issue of the Chinese government’s actions against civil liberties.

“Even people outside of the Church, they say ‘Why isn’t your pope saying anything against what China is doing?’,” Zen said in a video clip released Nov. 22. “It’s very sad.”

“The pope has a spiritual power, and he should use that power to encourage the government to do better, to change their ways,” said Zen.

On Oct. 22, the Vatican agreed “to extend the experimental implementation phase” of a two-year provisional agreement with the Chinese government, first signed on Sept. 22, 2018, concerning the nomination of bishops. The Vatican communique announcing the renewal added that the two parties intended to pursue “an open and constructive dialogue.”

Addressing the current situation in Hong Kong and China, and the Vatican’s renewed accord with the Chinese Communist government, Zen said that “Seemingly, [the pope] believed that by this compromise, this leniency, he can get anything. But the facts show that he got nothing.”

In Death as in Life, Blessed Migue...