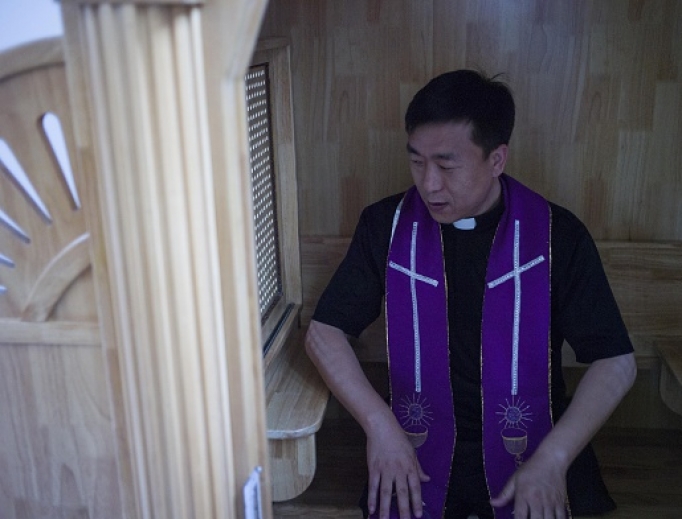 The Chinese Communist Party remains determined to extinguish the Catholic faith — over time.

Not long ago, I received an anguished email from a Catholic in China.

“The walls are closing in,” she sent over the encrypted service that we use to protect her — and other contacts in China — from state surveillance. “I don’t know how much longer we will be able to continue our work of evangelization here.”

My friend, whose name and location I cannot reveal for her own protection, works in the “underground” Catholic Church, which has faced increasing persecution since thesigningof the Sino-Vatican agreement two years ago this September. The agreement is set to expire on its two-year anniversary.

It is hard to know what is in the agreement, since it is still secret. It purportedly outlines a mechanism by which the Vatican and the Chinese Communist Party (CCP) would collaborate on the appointment of bishops: The CCP would select the country’s new bishops but final approval would be reserved to the Holy See.

Underlying this, it is safe to say, the Vatican and the CCP both had several larger — and very different — goals in mind when signing the agreement.

The Vatican intended to create a mechanism by which it could collaborate with Beijing on the naming of new bishops, specifically some of the 40 or so candidates it had identified over the past two decades to the large and growing number of bishop-less sees in China. The larger hope was that this would acknowledge the Pope’s authority over Catholicism and heal the long-standing division between the “underground” Church, which is loyal to the Vatican but not officially recognized by the Chinese government and the Chinese Catholic Patriotic Association, which was created by the CCP.

Not surprisingly, the CCP had very different goals in mind. Its first goal was to convince Pope Francis to legitimize the eight bishops that the Holy See had previously excommunicated, which he did even prior to the signing of the agreement. As subsequent events have made clear, the CCP also intended for the agreement itself to serve as a tool to be used to force bishops and clergy in the underground Church to join the Patriotic Association; and also, it has now become clear, as “cover” for an intensifying persecution of the Catholic Church as a whole.

It is safe to say, nearly two years after the signing of the agreement, that while the Chinese Communist Party has achieved its goals, the Vatican clearly hasn’t.

Only five “underground” bishops have been accepted by the CCP as legitimate, and all of these were already named and serving before the agreement was signed. There are 52 dioceses in China that have no bishop at all, and not a single one of these vacant sees have been filled in the two years since the agreement was signed. Moreover, instead of healing the division between the two “churches,” the secret agreement has been used as cover for the persecution of both — and for the intended obliteration of the underground Church.

I am not alone in this assessment. Mimi Lau, writing in Hong Kong’sSouth ChinaMorning Post, concluded,“It seems the agreement, which will expire in September unless it is extended, has contributed little in the way of rapprochement between the Holy See and Beijing or greater freedom for Catholics in China.”

To be sure, one reason for the failure of the agreement to produce significant gains for Catholic believers is the deteriorating situation in China for the followers of all faiths — Catholic, Protestant, Buddhist, Taoist, Muslim. In February 2018, months before the Sino-Vatican agreement was signed, the CCPissueda directive imposing onerous new restrictions on religion and religious believers in China. Then, in February of this year, a second directive followed,outliningin painful detail how these new restrictions would be implemented vis-à-vis all of China’s religions, religious institutions and religious practitioners.

But the situation in China is even more dire than this would suggest. The fact is that the CCP, led by General Secretary Xi Jinping, is at present carrying out a new Cultural Revolution, the specific targets of whichincludeallorganized religions andallreligious believers. The goal is not simply to restrict and control all religious activity and belief, it is to completely replace such activity and belief with worship of the CCP, its ideology and its leaders.

The campaign began two years ago. It involves converting Christian churches, Buddhist and Taoist temples, Islamic mosques and ancestral halls throughout China into what are called “Civilization Practice Stations for a New Era.” The new state church of China, in other words, is to be the party-state itself. The head of this new “church” is, of course, General Secretary Xi.

Bitter Winter, an online magazine by the Italy-based Center for Studies on New Religions that reports on religious liberty in China, haspublisheda chilling accountof the “conversion” of one such church: “After a month’s work [by Communist cadres], the church director proactively dissolved the congregation of this religious venue. Its members were later registered and transformed. … [M]ore and more believers are now being transformed into practitioners of such civilization stations.”

It is not merely that the CCP is suspicious of, or even hostile to, religious faith in China, although it is certainly both. Rather, it is the case that the party conceives of itself as a secular religion and is determined to impose that religion on the people of China by deploying all of the considerable resources that a hi-tech, one-party dictatorship has at its disposal. This is the environment in which Catholic bishops, priests and laity are forced to operate in today’s China. It is an environment of constant propaganda, surveillance and intrusion by hostile agents of the state.

Because it conflicts with these larger ideological goals of the Chinese state, the Sino-Vatican agreement has faced enormous political headwinds from its inception. In the almost two years since its signing, it has clearly not created more “space” for Catholic believers in China, as Cardinal Pietro Parolin, the Vatican secretary of state, had hoped, but, rather, has enabled the CCP to cloak its persecution of the underground Church by intimating that it has been at least tacitly approved by the Vatican.

Further evidence of bad faith on the part of the CCP, if any were needed, was new evidence that China has beencaught hackinginto Vatican computers. The hacking was obviously an effort to find out what the Vatican’s negotiating position would be as the two sides prepare to discuss whether the current agreement should be extended.

It would be bad enough if the agreement with the Vatican — like nearly all other international agreements entered into by the CCP — has turned out to be a dead letter. But it is actively being used to coerce bishops and priests into joining the Patriotic Association on the false grounds that the Holy Father has ordered them to.

A number of clergy have steadfastly refused to sign an oath of loyalty to the state-sanctioned church, and as a result, they have been placed under surveillance or house arrest. Among these are BishopVincent Guo Xijinof the Diocese of Mindong, who, along with the majority of his priests, has refused to sign. Bishop Guo managed to escape from his guards some months ago and is currently in hiding.

Other situations remain unresolved, as well, such as the case of case of Bishop James Su Zhimin, the Catholic bishop of Baoding in Hubei Province, who was arrested some 17 years ago and has not been heard from since. To fill the “vacant” see, which is one of the most important in China, the CCP has advanced a candidate who is a member of the Patriotic Association. The Holy See has yet to respond to the request, as far as is publicly known. Religious-freedom advocates are hoping that, before approving, or even considering, Beijing’s candidate, the Vatican will ask for a full accounting of the circumstances surrounding Bishop Su’s continued detention, while, indeed, fearing that he may be dead.

The provisional agreement will expire in September, and opinions differ on whether it is in the best interest of Catholics in China that it be extended. Archbishop Claudio Celli, who helped negotiate the agreement,has saidthat he thinks the Holy See “should probably reconfirm it for one or two years.”

Cardinal Joseph Zen, the retired archbishop of Hong Kong,has a very different opinion on the matter. He believes that the agreement has further marginalized the members of the underground Church, given that the CCP uses it to justify coercing Catholics to join the Patriotic Association.

Pope Francis, of course, will have the last word on the matter and has given no indication of his views. He has been very careful toavoid criticizingthe CCP throughout the course of his papacy.

If there is a tiny light at the end of the dark night that the Catholic Church is now experiencing in China, it is this: When the fifth underground bishop, Bishop Paul Ma Cunguo of Shuozhou, joined the Patriotic Association in a quiet ceremony a few weeks ago, hisoath of allegiance was much differentthan those made by the previous four bishops.

Those who preceded him were required to publicly swear “to work for an independent, self-governing church,” a condition clearly in conflict with the magisterium. As circulated on social media, Bishop Ma’s oath did not include this phrase. Instead, he reportedly promised to be “be faithful to the one, holy, Catholic and apostolic church, commit to building up the Church, the Body of Christ,and contribute to evangelization” and also to “abide by God’s command, fulfill his pastoral duties as a bishop and proclaim the Gospel faithfully.”

The only potentially questionable part of the oath — depending upon how it is interpreted — was a commitment to ensure that his diocesan priests would abide by the country’s constitution and laws, uphold the unity of the nation and social harmony, love the country and the church, and contribute to the “realization of the Chinese dream.”

I am not entirely sure what to make of this modified oath. If the CCP has dropped the pledge to “work for an independent, self-governing church,” it would be a major concession,since this phrase is the very definition of a schismatic church.

Of course — as always in the case of the Chinese Communist Party, one has to be alert to the possibility of duplicity. “They always have a knife up their sleeve,” as one senior Vatican official put it.

Is this a harbinger of better times to come for the Catholic Church in China, or is it merely a strategic deception intended to lure the Vatican into extending the agreement? Time will tell.

Transcript of EWTN News Nightly in...