Catholics aim for national unity with Eucharistic and rosary processions 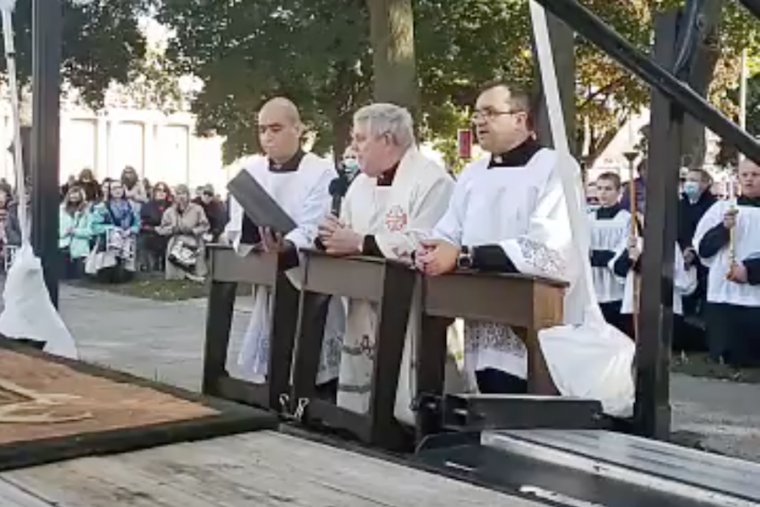 Catholics aim for national unity with Eucharistic and rosary processions

After riots and protests came to Kenosha, Wisconsin this summer, Archbishop Jerome Listecki led a Eucharistic procession and rosary in the city on Sunday, hoping to bring peace and healing to a fractured city, through the witness of Jesus Christ.

A procession through downtown Kenosha included more than 200 people, who walked past boarded-up buildings and the remains of a scorched car lot, while praying for their city.

After the police shooting of Jacob Blake Aug. 23, and fatal shootings during subsequent demonstrations in the city, Kenosha was among several cities in the center of national division and unrest this summer.

The Oct. 4 rosary and procession was part of a series of similar events, organized by a group called Unite Our Nation.

Before the Kenosha event, local Knights of Columbus member Chris Kuchur told local media that something has been lost in the United States, as religion has become less important to many American families. He emphasized the importance of prayer and peaceful dialogue.

“We just need some peace in this town and this country … How do you achieve it? Through, not protest, but peaceful dialogues and understandings and prayer,” he told The Journal Times.

The first Unite our Nation rosary took place Aug. 15 in Madison, Wisconsin. More than 3,000 people gathered for a Eucharistic procession and rosary in Madison, praying for the 50 states by name and asking for peace to take root in the United States.

“We’re taking Our Lord into the streets, being the light in the darkness that we see everywhere,” Kevin O’Brien, co-founder of Men of Christ, a Milwaukee-based apostolate that organized the procession, told Catholic World Report.

“You see not only the darkness of the riots, but the culture of anger that I see permeating everywhere. There is a blindness to truth, to goodness. So we’re calling down graces from Heaven to open up the minds and hearts of our people.”

There are at least 17 more Unite our Nation events scheduled in the weeks to come, in states across the country.

And the aim is to keep the processions focused on prayer. Event organizers and attendees are discouraged from promoting any political opinions or paraphernalia.

The event is also being encouraged to take place on university campuses. Franciscan University of Steubenville and the Steubenville diocese hosted a “Unite Our Nation” Mass and Eucharistic rosary procession on Saturday.

“How better to unify and heal our nation then through the Body of Christ and the accompaniment of the Mother of God,” said Bishop Jeffery Monforton of Steubenville.

O’Brien said that Unite Our Nation is “becoming a movement” with tens of thousands of participants throughout the country. Speaking at the Kenosha event on Sunday, he expressed his pride in the United States and thanked the participants for coming out.

“We are a great nation. America is a great country. We are doing good … Thank you for being heroes … We don’t turn our backs on the world. We go into it and change it from within,” O’Brien said during the day’s prayers.