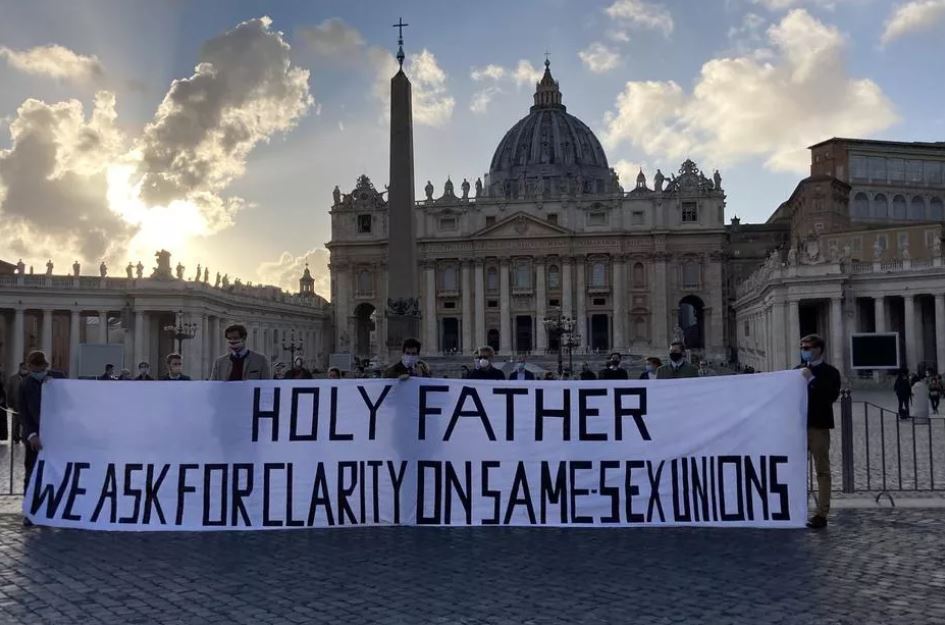 The initiative comes in response to Pope Francis’ remarks, given in a new documentary, in which he gave his clearest support yet for civil union laws for same-sex couples.

A group of lay faithful and priests gathered in St. Peter’s Square this afternoon to ask Pope Francis to clarify his reported remarks on same-sex civil unions as media and politicians around the world interpret them as a significant change in Church teaching.

The group, led by Austrian layman Alexander Tschugguel who came to prominence last year after throwing the Pachamama statues into the Tiber during the Amazon Synod, gathered in the shadow of St. Peter’s basilica at about 5pm where they stood and knelt in silent prayer.

In front of them, next to the perimeter fence of the square, the participants held up a large banner that read: “Holy Father, we ask for clarity on same-sex civil unions” which Vatican authorities allowed to be displayed for 10 minutes before asking for it to be taken down.

It is rare that a large banner of this kind has been allowed to be displayed so close to the square and given such prominence.

The initiative comes in response to Francis’ remarks, given in a new documentary called Francesco, in which he gave his clearest support yet for civil union laws for same-sex couples. The Vatican has yet to offer any clarificiation or response regarding the comments.

Critics say the Pope’s comments, although expressed as personal opinion, signify a break with Church teaching on same-sex civil unions, notably a 2003 Vatican document which clearly opposed them. They have asked him for a retraction.

Politicians and the media have also distorted his comments to suggest the Pope was giving not only tacit endorsement of homosexual lifestyles but also homosexual adoption, both of which he has firmly opposed in the past.

“The goal of our whole meeting here was not to cause scandal but to bring a message to the Holy Father,” said Tschugguel who runs the St. Boniface Institute, an organization founded to help Catholic laity speak out.

But Tschugguel added that the “problem with this quote of the Pope is that it has been used to introduce a harsh anti-Catholic agenda.” He referred in particular to Venezuelan President Nicolas Maduro who on Thursday asked his country’s parliament to discuss same-sex “marriage,” citing the Pope’s comments. “Maduro now feels empowered to take this big step,” Tschugguel said.

Proponents of a civil partnership bill in the Philippines, who include the nation’s President, have also used the Pope’s remarks to help push through the legislation, while at least one widely circulated newspaper in the UK interpreted the Pope’s reported remarks on same-sex civil unions as blessing “gay weddings.”

Tschugguel said it “doesn’t matter” that the Pope thinks differently and has upheld traditional marriage as only between a man and a woman. “We know that he thinks that, but media all over the world, from a little subway newspaper to big newspapers, did not say this. They don’t say it’s not a change of doctrine, but they all say that it could mean a change of the law.”

The 50 or so participants, who included a group of 15 Austrians aged 20 to 30 who had driven down from Vienna as well as people from many other nationalities, then knelt for half an hour in silent prayer in the square and ended with the Salve Regina.

“We pray because if you ask for anything without prayer it’s useless,” Tschugguel said.

“We don’t want anything bad to happen because of our action today,” he added. “We just want to respectfully ask the Holy Father to give us clarity on this.”