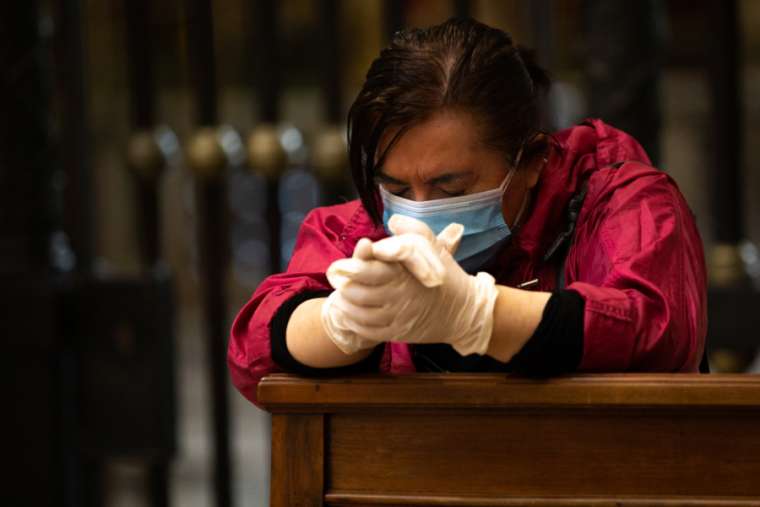 As Rome reopened shops and restaurants on Monday, Catholics rejoiced in being able to attend Mass again for the first time in 10 weeks after Masses were first closed to the public.

“To receive Communion again as a family was the culmination of our every prayer and desire during the quarantine,” Melissa Steele told CNA on May 18.

Steele, an American mother of five residing in Rome, attended Mass with her family at the Church of St. Joseph of Cupertino, where she said hand sanitizer was provided at the door and the priest came to each pew to administer Communion.

“For the past two weeks, our children, especially our not-typically-pious three-year-old twins have been increasingly discontented with virtual Mass and were begging to ‘go to Mass and pray with Jesus.’ So this date of May 18 was a long-awaited one by our family. It was a simple Mass but glorious,” she said.

Churches and papal basilicas reopened to the public for Mass May 18 with additional safety protocols to help prevent the spread of the coronavirus.

At St. Peter’s Basilica, volunteers from the Order of Malta conducted temperature checks before people could enter the security line, where there are now markings on the ground indicating how far apart people must stand.

Face masks are now required to enter the basilica, and security stationed throughout St. Peter’s Square have been enforcing social distancing requirements. Inside the basilica Eucharistic adoration, confession, and Masses are once again available to the public.

“I rejoice that the Holy Father, together with the government and bishops of Italy, have agreed to make the sacraments more widely available to everyone who has been longing for them,” Fr. Joseph Hudson, a Benedictine priest studying in Rome, told CNA.

The Solemnity of the Ascension of the Lord on May 24 will be the first Sunday Mass with public attendance allowed in more than 75 days for parishes in Italy, including St. Patrick’s Church in Rome, where its rector Fr. Gregory Apparcel has been working on a plan to make it safe for the public.

“We are happy to be able to have public Masses once again, though we are cautious and worried that we will all carefully follow the protocols,” Fr. Apparcel told CNA.

“The most important aspect is to offer the Eucharist to the faithful once again, as they have been fasting for over 10 weeks now,” he said.

Fr. Apparcel recorded a video on Facebook for his parishioners explaining the parish’s new protocols, which include social distancing and face mask requirements, no hymnals, and reception of Communion only on the hand.

He told CNA: “Some of our parishioners, however, are not yet comfortable in coming to Church, and have told me how much they appreciate our virtual Masses. They hope that we will continue to do this, which we will try to do throughout the summer, and beyond if necessary.”

“We also have many, many people participating in these Masses from the U.S. and other countries where public Masses are not yet available. And, also from many people who are homebound for many other reasons. It has opened up a new ministry that we never thought we needed to do,” he added.

According to the Italian health ministry, there are 3,910 current cases of COVID-19 in Lazio, the region in which Rome is located. However, many people took to the streets as shops, restaurants, and beauty salons reopened for the first time in months.

Some coffee shops and restaurants erected makeshift social distancing barriers between tables. Romans reveled in being able to drink their espressos and cappuccinos inside the coffee bar, rather than as takeout in a styrofoam cup as had been the protocol for the previous two weeks.

Steele said that her family was looking forward to being able to visit museums and archeological sites again this month in much less crowded Rome.

“The boys are thrilled that they can order a cone of gelato now and us parents that we can sit down for a cappuccino. We are excited to go to a restaurant together soon — first time in 2.5 months,” she said.

Religious communities in Rome are also loosening prior restrictions as Italy lifts its lockdown.

“In our monastery, most of our self-imposed restrictions on movement will be removed and we will again be able to visit churches, our professors, and go to confession outside the monastery. Before we were allowed to go out only during the early morning for exercise, but now we will be able to move around more freely,” Fr. Hudson said.

The prior of St. Anselm Abbey in Rome has called all of its residents to exercise individual responsibility, asking the priests to avoid crowded places, public transportation, and restaurants.

“We will probably become even more cautious at home, because of the new possibilities of being exposed to the virus, but in all, we are pretty confident that things are improving little by little,” Hudson said.

“Italy is emerging from a very difficult period in its history. As nothing can cancel life and all the essential events surrounding it, so nothing can cancel the religious needs proper to humanity. Marriage, baptisms, forgiveness of sins, and communion with Our Blessed Lord are as needful for the soul as ordinary nourishment and communion is for the body,” the priest said.