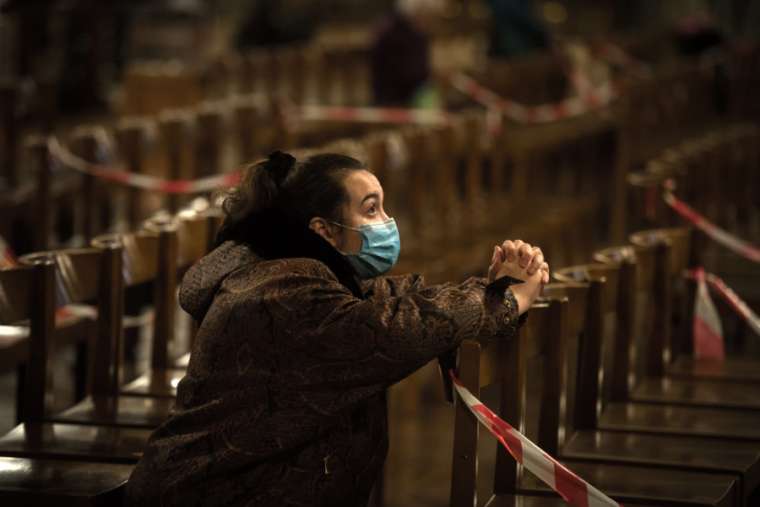 CNA Staff, Nov 5, 2020 / 06:00 am (CNA).- Bishops urged Catholics in England to join in a nationwide daily “moment of prayer” Wednesday as the country entered a second lockdown.

Cardinal Vincent Nichols of Westminster and Archbishop Malcolm McMahon of Liverpool issued the appeal Nov. 4, the day before public Masses were suspended in England for the second time this year following a surge in coronavirus cases.

“At this difficult moment, we ask that, as a Catholic community, we make full use of our churches as places of individual prayer and sources of solace and help,” said the president and vice-president of the English and Welsh bishops’ conference.

“We must sustain each other in our patterns of prayer, joining a national shared moment of prayer each day at 6pm, and observing the Vigil of Christ the King (Nov. 21) as a day of prayer for the ending of this pandemic.”

Last Saturday, Nichols and McMahon challenged the government’s decision to ban public worship during the new lockdown, which began Nov. 5 and is due to end Dec. 2. They asked the government to produce evidence justifying the need to suspend communal worship.

But in their statement on the eve of the lockdown, they asked Catholics to obey the new ordinances.

“Despite profound misgivings it is important that we, as responsible citizens, observe these regulations, which have the force of law,” they said.

They continued: “It is also important to recognize that these regulations are not an attack on religious belief. However, they do demonstrate a fundamental lack of understanding of the essential contribution made by faith communities to the well-being, resilience, and health of our society.”

A priest in the diocese of Nottingham had said that he would be willing to be arrested rather than deny the sacraments to the people of God for a second time.

But Fr. David Palmer, a priest of the Personal Ordinariate of Our Lady of Walsingham, announced on Twitter Nov. 4 that his bishop had asked him to observe the new regulations.

He wrote: “I am deeply saddened to say that I have been asked by the bishop not to offer private Mass while the Church is open for private prayer. I can’t go against the direct request of the bishop. He had great empathy for my position, but still felt he had to ask me to desist.”

Nichols was one of the signatories of a letter sent by religious leaders to the Prime Minister Boris Johnson arguing that the ban had no scientific justification.

The Nov. 3 letter was also signed by Justin Welby, the Archbishop of Canterbury, and other Anglican leaders, as well as representatives of Pentecostal Protestant, Jewish, Sikh, Muslim, and Hindu communities.

MPs approved the new lockdown measures Nov. 4 by 516 votes to 38. Places of worship will be allowed to open only for individual prayer, apart from funerals, which 30 people may attend.

Public worship will continue in Scotland after Nov. 5, but is currently suspended in Wales until Nov. 9.

During the first lockdown in England, public Masses were suspended from March 23 to July 4.

In their joint statement, Nichols and McMahon said that Catholics were called to follow the “pathway of prayer and service” during the lockdown.

“This … is the royal road we are to take as a gracious witness in our society today,” they said.

Exorcist: Our Lady of Sorrows Will...