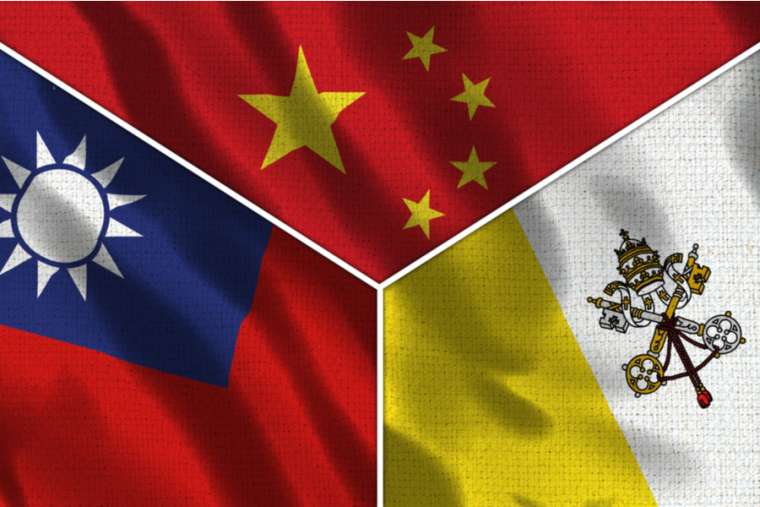 A spokesman for the Chinese Ministry of Foreign Affairs, Wang Wenbin, has underscored the country’s insistence that Taiwan not be recognized as a sovereign nation in response to a question on the island democracy’s relations with the Holy See.

Since the 1970s, the Communist People’s Republic of China has insisted that the United Nations and member states recognize only “one China,” under the mainland government.

In 2018, the Holy See and Beijing signed a two-year deal to unify the underground Catholic Church in China with the Communist-administered Chinese Patriotic Catholic Association, and to collaborate on the appointment of bishops in Chinese dioceses. That agreement expired on September 22 but is expected to be renewed by both parties.

Speaking at apress conferenceon Sept. 22, Wenbin responded to a question on the deal’s expected renewal from the Japanese Kyodo News Agency.

Responding to the question, the Chinese foreign ministry spokesman insisted “first of all” that “Taiwan is an inalienable part of Chinese territory” and that reporters should not refer to the Republic of China and instead use the term “China-Taiwan.”

“Regarding the matter you mentioned,” Wenbin continued, “in the last two years, since the signing of the interim agreement on the appointment of bishops between China and the Vatican, with the joint efforts of both sides, the agreement was implemented smoothly and the cause of Catholicism in China developed healthily.”

“The two sides will continue to maintain close communication and consultations, and will also continue to promote the process of improving these relations. China and the Vatican have maintained good communication. China is sincere and active in advancing China-Vatican relations. It is open and welcomes exchanges between the two sides.”

The Holy See’s status as the last major diplomatic power to recognize Taiwan has been an ongoing source ofdiscussion during the renewal talksbetween China and the Vatican.

Vatican officials have reportedly told journalists off-the-record that a change of status was possible, even while the Vatican has assured Taiwan that its agreement with Beijing addresses religion, not global politics.

In July, the Hong Kong newspaper South China Morning Post quoted a Vatican source saying that the Holy See could even move its embassy from Taiwan to the mainland.

“Taiwan should not be offended if the embassy in Taipei is moved back to its original address in Beijing,” the Vatican source reportedly said.

In July, Taiwan’s newly installed Archbishop Thomas An-Zu Chung said that such a move “could happen soon if the mainland Chinese government is more open-minded and receptive towards the Roman Catholic Church.”

Taiwan’s Ministry of Foreign Affairs has told journalists that the Vatican has sought to downplay the same possibility.

“The Vatican has assured us repeatedly that the bishop appointment deal with China is a religious rather than a diplomatic matter,” a ministry spokesperson said at a press conference Sept. 15, according to the national news agency of Taiwan.

“We have been closely observing the interactions between the Vatican and Beijing, and we maintain smooth communications with the Holy See,” Ou said.

Cardinal Pietro Parolin, the Vatican Secretary of State, said last week that the Vatican’s goal in negotiations is to “normalize” the life of the Church in China.

“With China, our current interest is to normalize the life of the Church as much as possible, to ensure that the Church can live a normal life, which for the Catholic Church is also to have relations with the Holy See and with the Pope,” Parolin said Sept. 14.

While the Chinese government has insisted that the 2018 agreement has been implemented smoothly, state officials in different regions of China have continued to remove crosses and demolish church buildings, and underground Catholics and clergy continue to report harassment and detention.

During the coronavirus pandemic, the state-affiliated Chinese Catholic Patriotic Association and the Zhejiang Province’s Chinese Catholic educational administration committee issued new regulations on the reopening of churches requiring Chinese “patriotism” to be added to the celebration of the liturgy.

While the agreement cedes a measure of control over episcopal appointments to the Communist government, there are also more than 50 dioceses without bishops in China, including Hong Kong – which has seen a severe crackdown on civil liberties since the imposition of a new National Security Law in July.

At the same time, however, some Vatican sources have mentioned to CNA that, since the deal was signed, there have been no illicit ordinations of bishops selected without Rome’s approval, a move some point to as a sign of progress.

The Vatican, and Pope Francis, have refrained from public comment on the continued abuses of Chinese Catholics by the government during the course of the two-year deal. The Holy See has also remained silent on the the detention of more than 1 million Uyghurs in a network of concentration camps in Xinjiang Province, which human rights groups have called a “genocide” and campaign of “ethnic cleansing.”

In aninterview Monday with CNA, Cardinal Joseph Zen, retired Bishop of Hong Kong, said that the Church’s efforts to negotiate an extension to the 2018 agreement with China are harming the evangelization of that country, especially because of Vatican silence on human rights abuses.

“The resounding silence will damage the work of evangelization,” the cardinal said. “Tomorrow when people will gather to plan the new China, the Catholic Church may not be welcome.”

Asked if he saw any prospect of an improvement for the local Church coming out of Vatican negotiations with the current Communist government, Zen said simply “No.”