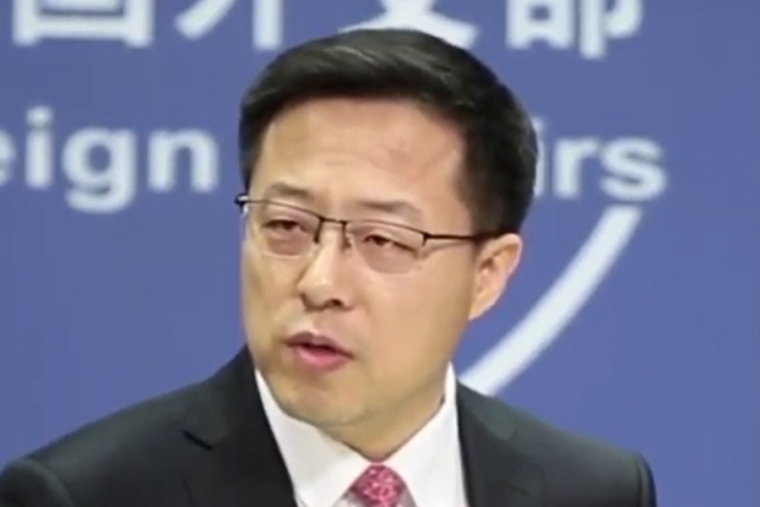 A spokesman for China’s foreign ministry said Thursday that China’s interim deal with the Vatican has been “implemented successfully.”

He made the remark days before the provisional agreement signed by the Vatican and China on Sept. 22, 2018, is due to expire.

“With the concerted efforts from both sides, the interim agreement on the appointment of bishops between China and the Vatican has been implemented successfully since it was signed around two years ago,” Zhao Lijian, spokesman for China’s Ministry of Foreign Affairs, said at a press conference Sept. 10.

Bloomberg reported Sept. 9 that two anonymous sources had said that the deal would be renewed in the coming weeks.

Following the agreement, and in line with the Chinese Communist Party’s program of “sinicization,” state officials in different regions of China have continued to remove crosses and demolish church buildings, and underground Catholics and clergy continue to report harassment and detention.

The Chinese government spokesman went on to say that the Vatican and China had “accumulated more mutual trust and consensus through a series of positive interactions” since the beginning of 2020,citing mutual support during the COVID-19 pandemic.

During the coronavirus pandemic, the state-affiliated Chinese Catholic Patriotic Association and the Zhejiang Province’s Chinese Catholic educational administration committee issued new regulations on the reopening of churches requiring Chinese “patriotism” to be added to the celebration of the liturgy.

On July 1 a National Security Law came into force in Hong Kong that criminalizes new categories of “secession,” “subversion,” “terrorism” and “collusion with foreign forces.” Anyone convicted under the law will receive a minimum of 10 years in prison, with the possibility of a life sentence.

Cardinal Joseph Zen, emeritus Bishop of Hong Kong,has said that he has “no confidence”that the new National Security Law will respect the religious freedom of Catholics.

Chinese President Xi Jinping has mandated the “sinicization” of all religions in China, a move which the U.S. Commission on International Religious Freedom called “a far-reaching strategy to control, govern, and manipulate all aspects of faith into a socialist mold infused with ‘Chinese characteristics.’’’

The Chinese government is in the midst of implementing a five-year “sinicization plan” for religions in the country. Islam has faced increased persecution in the country, with at least 900,000 Uyghur Muslims held in internment camps. Survivors of the camps and their families have reported suffering torture, indoctrination, sterilization, and forced labor, along with other abuses.

Since the Vatican-China deal was signed, Pope Francis has not spoken publicly about the plight of the Uyghurs or the Hong Kong protest movement.

The terms of the 2018 provisional agreement between the Holy See and China have not been released. However it is known that the accord aimed to regularize the country’s government-appointed bishops who had been out of communion with Rome.

Following a Feb. 14 meeting between Archbishop Paul Gallagher, Secretary for Relations with States of the Holy See, and Wang Yi, the Chinese foreign minister,the Holy See press office said that the meeting“highlighted the importance of the provisional accord” and renewed the “willingness to continue the institutional dialogue at the bilateral level to promote the life of the Catholic Church and the good of the Chinese people.”

The cybersecurity company Recorded Future reported July 28that Chinese state-sponsored hackers had reportedly targeted Vatican computer networks in an attempt to give China an advantage in negotiations to renew a provisional deal with the Holy See.