Choose a College With a Discerning Mind and Heart 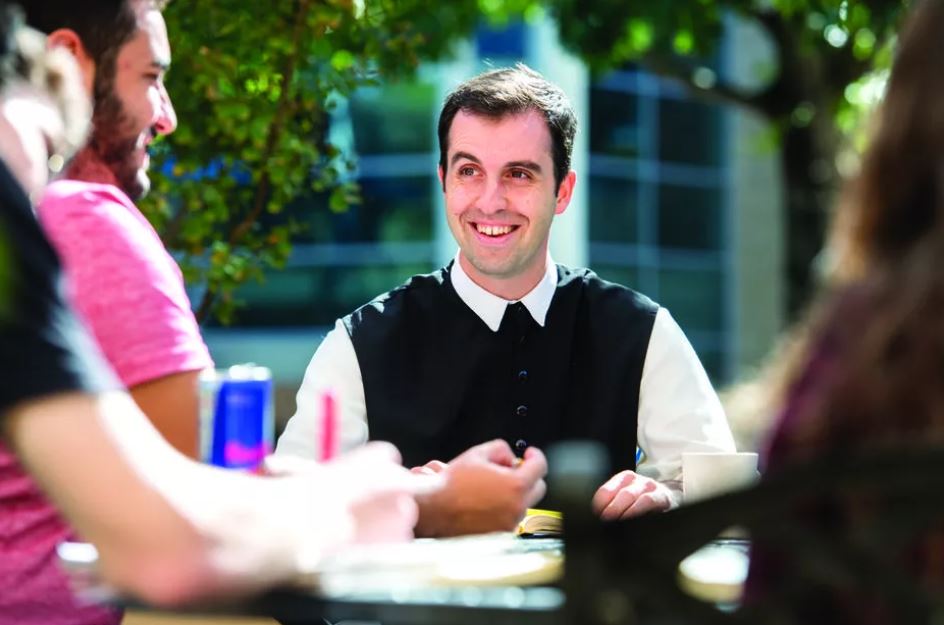 Choose a College With a Discerning Mind and Heart

Cistercian Father Thomas Esposito, assistant professor of theology at the University of Dallas (UD) and subprior (and former vocations director) of the Cistercian Abbey of Our Lady of Dallas, drew from his experience as both a student and now monastic religious to help those discerning understand the parallels between religious and college discernment.

For many students, the choice of where to pursue their undergraduate studies is one of great trepidation. Along with the often-present financial and personal constraints, the addition of further spiritual considerations can make the decision process simply overwhelming.

Yet in our Catholic history, we have many examples of men and women who have made (seemingly) quite radical decisions about how to best give over their lives to the service of God. Surely there is some way to use the example of those who discern the lifelong practice of evangelical counsels to help us wisely discern where to spend our four years of undergraduate studies.

CistercianFather Thomas Esposito, assistant professor of theology at the University of Dallas (UD) and subprior (and former vocations director) of the Cistercian Abbey of Our Lady of Dallas, drew from his experience as both a student and now monastic religious to help those discerning understand the parallels between religious and college discernment. This interview has been edited and formatted for print.

How would you describe the purpose of a college education?

I’ll start with the etymological roots. “Educe” would be to lead out — any education is meant to lead you out of a state of ignorance into a state of knowledge. And there are obviously different forms of knowledge. I think most people today would regard a college education as a job certification or practical equipment, or part of pursuing a career.

But I don’t think that’s a true understanding of college.

The knowledge of one’s own gifts and limitations should entail a greater ability to be a lifelong learner, to develop the virtues you need to live a joyful and fruitful life in the search of truth.

How does the college decision potentially influence one’s ability to discover his or her vocation?

It could be either an amazing help or do amazing harm, but what you are getting at is the question of formation. The 18- to 22-year-old range is a very impressionable age. The influences which govern or inspire young men and women of that age can have lifelong consequences. You shouldn’t think of that in a drastic, fearmongering way, but it’s a sobering fact that the ideas that you come across in college can and will influence you throughout your life, perhaps more strongly in the short term, but they do become roots that plunge deep into the ground of your soul.

You obviously found your vocation, so I think we can safely say youchose rightly by attending the University of Dallas. How did you decide to attend UD for your undergraduate studies?

From my own experience, I can say that no syllogism or deductive logic could lead you to the mathematical certainty that you should go here or there. I wanted to go to Notre Dame, and Notre Dame wait-listed me. So I had to figure out something else. God often opens doors by shutting the one we want to walk through! I believe my mom introduced me to UD: She had heard that it was a solid Catholic school with a Rome program. I was just developing a fascination with the intellectual life, so the core curriculum didn’t initially appeal to me because I still had that “jock streak” in me, but it was eventually the Rome program — the allure of living on a vineyard for five months and traveling Europe and hanging out with the Pope — that sold me.

I remember making a list of pros and cons for UD and Villanova. On several occasions I nudged the Villanova numbers up and the UD ones down. And I took it to prayer on several occasions. No thunderbolt from heaven illuminated the dark sky, but I had a strange sense that I was supposed to be at UD. And I begrudgingly gave in, but from Day One I met friends who are still my buddies, and the first seeds of a fascination with theology and philosophy that were planted in high school exploded.

For a time, you were also the vocations director for the Cistercian Abbey. Do you think there are any parallels that can be drawn between someone who is trying to discern the religious life and discerning which college to attend?

Absolutely. When a young man inquires about life in our monastery and wants to know how to discern, I’ll often begin by saying that God allows us to be drawn towards particular examples or instances of community life that are tailor-made for us. Regarding marriage, a young man does not marry the form of woman; there is someone concrete who comes into his life and sweeps him off his feet. Something similar happens in the religious life. You have to be drawn to a particular community’s charism in order to sense that you want to be part of that. You don’t want to join a community whose interactions with each other are clearly toxic or whose ministry does not correspond to your talents and desires. You are going to be drawn to a community which will appeal to your most noble desires and talents and employ them for the greater glory of God.

A similar process is at work in the discernment of the college choice. There are many things that colleges can be known for — whether it’s a law program, outstanding campus ministry or a Rome program — but there has to be something that tugs at you and makes you want to investigate it further. And then the personal encounter comes in the form of a visit or a chat with a student or alumnus who communicates with the same enthusiasm or energy about the place. And then that love of a place can be a seed which germinates in your own heart through prayer.

When you eventually discerned your vocation to the Cistercians, did you encounter any of the same feelings or experiences that you had when you decided to attend UD?

Oh, yes. The discernment to join the abbey was more concrete. During the Easter Triduum retreat as a senior, I walked out of one of the conferences that one of the monks gave, and I had the sense that God wanted me to be there. I wasn’t thrilled about that. My initial answer to God was “Fine.” But once I had that in sight, the selfish cords which I had wrapped around my will were gradually undone.

There is an intuitive grace which is available to you if you are truly trying to harmonize your own interests and desires with what the Lord has in store for you. There is always going to be an element of uncertainty, and that’s good — but I think that there’s a great connection you can make to a particular college that you can sense in visiting the place or speaking to students and alumni to know the place. These interactions can give you confidence that it is a good fit for you.

Are there any resources or stories of the saints that you would recommend to students trying to decide on their future college?

St. Paul — but not so much the account of his conversion in Acts as his own account in Galatians 1. Here, he gives a sense of what he’s made of this dramatic change in his life, and he notes that God has prepared him for that shift from his zealous preservation of his ancestral traditions to the revelation of God’s Son, Jesus Christ. Paul saw his Judaism as absolutely essential to his vocation as a Christian apostle to the Gentiles — so Paul, not as the guy on the horse, but in his reflection on how God has led him throughout his life. And I don’t think it’s ever too early to introduce people, at least in high school, to Ignatius’Spiritual Exercises. They are a most welcome and necessary part of discerning a vocation like marriage or the priesthood — or college!

Judge killed by mafia 30 years ago...