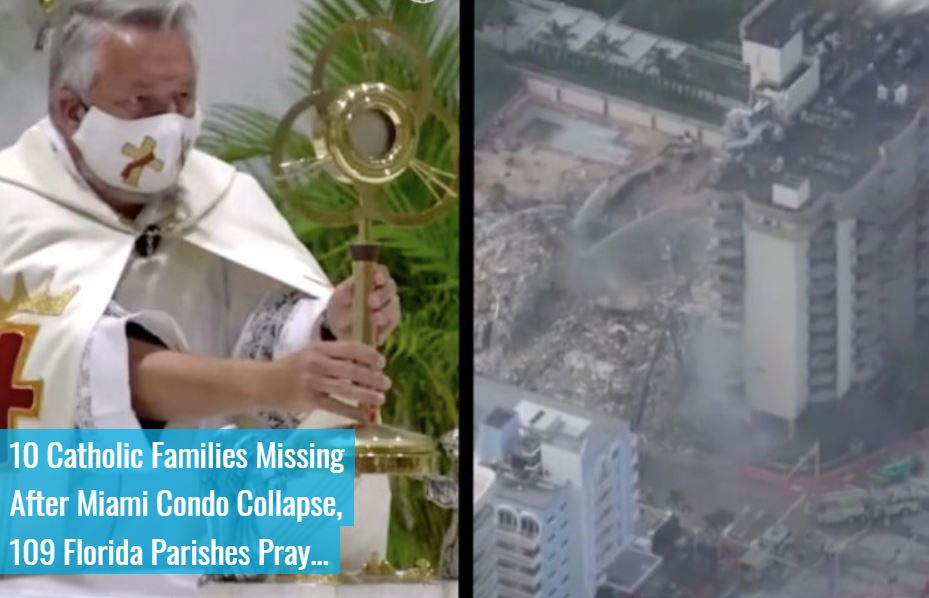 This is so heartbreaking!

At least 10 Catholic families are reportedly missing after a 12-story condominium partially collapsed on Thurs., June 24 at 1:30 am local time in Miami.

The families attend St. Joseph Catholic Church, the closest place of worship to the building. 109 parishes throughout the Archdiocese of Miami joined in prayer for victims of the collapse.

As of this writing, 11 people died and 151 people are missing as a result of the collapse. Search and rescue efforts are still ongoing.

St. Joseph Pastor Fr.  Juan Sosa read the names of several missing parishioners during his Sunday Mass homily. He left a book of remembrance for people to write victims’ names so parishioners can pray for them.

One missing victim includes an 11 year-old girl who received her first communion at the church. Her father, mother, and four-year-old sister are also missing.

“I have visited the place many times and I have been to dinner with some of those members that are missing,” Fr. Sosa told the Archdiocese of Miami.

“We heard rumbling. We thought it was thunder and lightning and since that’s common here, we just didn’t think about it,” Lopez told Florida’s Local 10 News.

“But then a second thunder and lightning sound just moved the entire apartment, and then we realized, yeah, this is not a storm. This is something more serious.”

“The Holy Father has asked me to express his deep sadness at the grievous loss of life resulting from the condominium collapse in Surfside,” Pope Francis sent in a message via papal envoy to Miami Abp. Thomas Wenski.

“He offers heartfelt prayers that Almighty God will grant eternal peace to those who have died, comfort to those who mourn their loss, and strength to to all those affected by this immense tragedy.

“With gratitude for the tireless efforts of the rescue workers and all engaged in care for the injured, the grieving families and those left homeless. Pope Francis invokes upon the entire community the spiritual gifts of consolation, fortitude, and perseverance in every good.”

Let us pray for all victims of the Miami building collapse!