“A Moment of Agony”: Man Storms Church, Breaks Crucifix After Mass in Brazil (Video Inside) 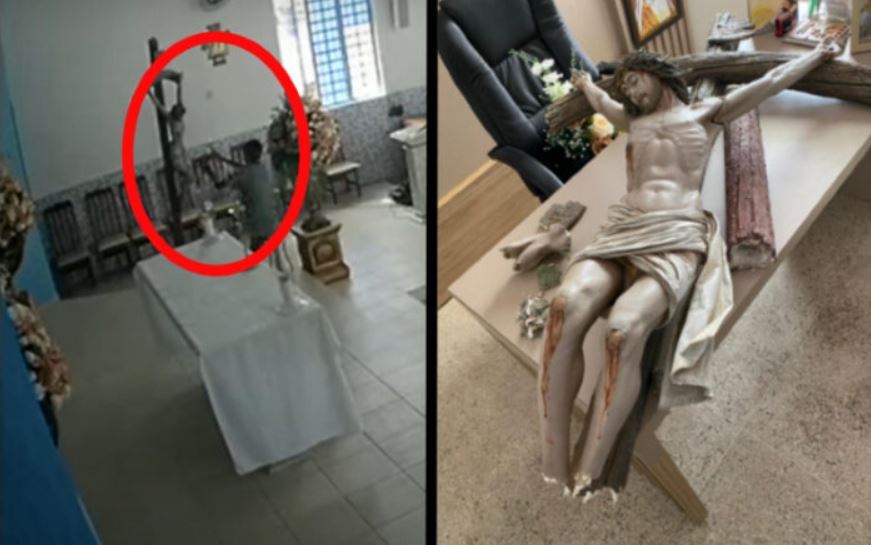 “A Moment of Agony”: Man Storms Church, Breaks Crucifix After Mass in Brazil (Video Inside)

Please pray for this family!

A 28 year-old man broke a large crucifix after Mass on July 18 at Our Lady of Grace Church in Palmeira dos Índios, Alagoas in Brazil.

The church’s security footage shows the man approaching the altar and aggressively pushing the crucifix to the floor. Parishioners then attempt to capture him as he flees the scene.

Parish pastor Fr. Fábio Freitas said the man has a history of mental illness. He does not have an aggressive history at the church, but his family confirmed he acts violently at home.

Fr. Freitas said the incident “was a moment of agony and sadness” that they “never expected” from a young man “who has suffered from mental problems since childhood.”

“Soon after I gave the final blessing, the boy entered the church disturbed, very different from other times and already aggressively throwing some objects on the ground, such as alcohol gel containers,” Fr. Freitas said.

“[He then] went to the image of Jesus crucified and threw it against the wall, breaking into pieces.”

Fr. Freitas added that there could be a multitude of reasons for man’s the outburst.

“Lack of having taken the controlled medicine, since he appeared to be very agitated or something was done to him, inducing him to this evil action,” the priest said. “We will start over and look for a solution to solve this problem.”

Let us pray for all those with mental illness!

St. Dymphna, patron of the mentally afflicted, please pray for us!

A Cry From the Heart About ‘Tradit...