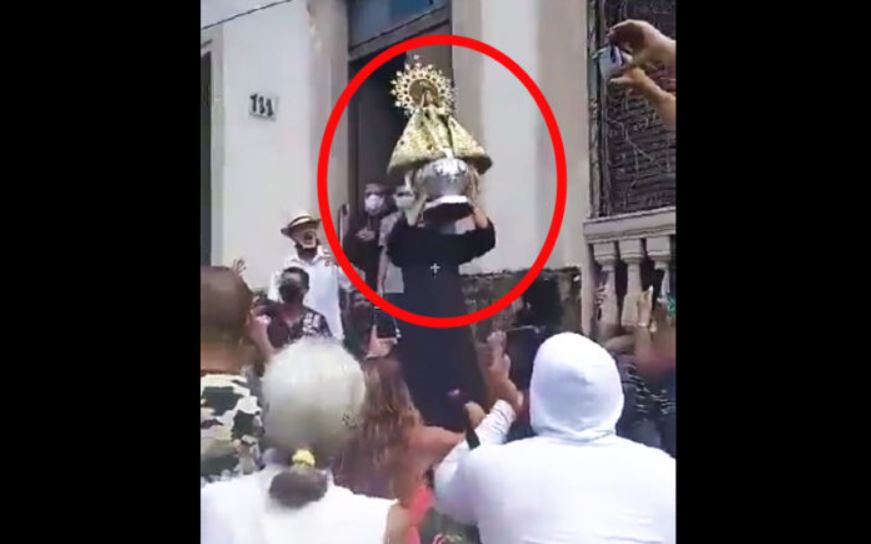 Protests are underway in Cuba as citizens demand an end to 60 years of communist rule and government oppression. The demonstrations began on July 11 in Havana.

The country also experiences a medical and economic crisis, resulting in food, medicine, and gas storages, as well as surges in covid-19 cases and deaths. These difficulties also contribute to the protests.

Videos of the rare demonstrations surfaced on social media. One video shows a priest holding up a statue Our Lady of Charity (La Virgen de la Caridad), the patron saint of Cuba, before a crowd of protesters in Bejucal.

The crowd chants, “Queremos Libertad!” (“We want freedom!”) as the priest elevates the statue.

Catholic Connect’s post reads, “A heroic priest takes out the statue of the Virgin Mary and shows her to the protesters, which gives them hope for a brighter future.

“Cubans are sick and tired of communism, they want a change and now we have to pray and act to assist them in whatever way possible to free them from the evils of communism!”

“Cubans are chanting ‘Queremos Libertad’ which means ‘We want freedom.’”

Pope Pius XI warned in his 1937 encyclicalDivini Redemptoris, that communism is “intrinsically wrong”.

“See to it, Venerable Brethren, that the Faithful do not allow themselves to be deceived! Communism is intrinsically wrong, and no one who would save Christian civilization may collaborate with it in any undertaking whatsoever.

“Those who permit themselves to be deceived into lending their aid towards the triumph of Communism in their own country, will be the first to fall victims of their error.”

Our Lady of Charity, please free the people of Cuba from the grips of communism!