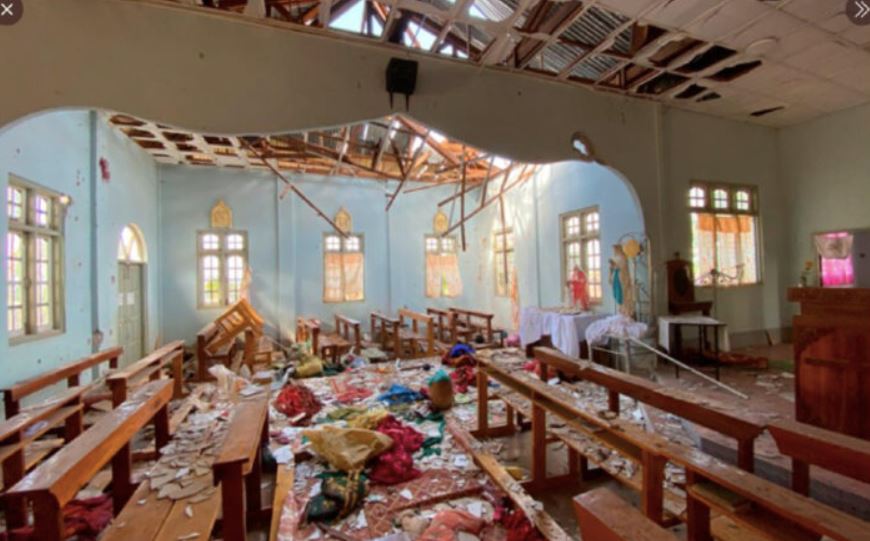 The Tatmadaw armed forces of Myanmar bombed Sacred Heart Catholic Church in the Kayan Tharyar village of Kayah State in eastern Myanmar at approximately 1 am local time on May 24.

Using four artillery shells, the attack killed four civilians and injured eight. One man and three women sheltered inside the church after violence arose near their homes. The attack severely damaged the roof, ceiling, and cross in the church.

The Southeast Asia country’s population of more than 54 million people is mostly Buddhist and approximately six percent Christian. Catholic priests and nuns have joined the protests against the military coup.

Here’s photos of the May 24 attack:

NUG’s Ministry of International Cooperation of Myanmar described the attack:

“Elderly people and children were hiding at the Church after fleeing from their homes due to the cruel attacks on villagers from the terrorist junta ‘SAC’ forces. The junta forces (also known as the Tatmadaw) continues to use heavy battlefield weapons to bombard and attack innocent civilians across Myanmar to threaten the brave people into submission, so that they can continue their reign of terror.”

NUG Spokesman Dr. Sa Sa gave an “urgent appeal” to “international communities” for help “ending this senseless killing of civilians in Myanmar, destruction of churches and targeting of already oppressed and marginalized ethnic communities, and to help and support the brave people of Kayah and of Myanmar overcome this brutal reign of terror.”

“We have been doing everything we can around the clock, and now we need the support, recognition, actions and intervention from the intentional communities before more innocent civilians are slaughtered.”

Pope Francis presented a message of hope for Myanmar Catholics as he offered Mass for them on May 16.