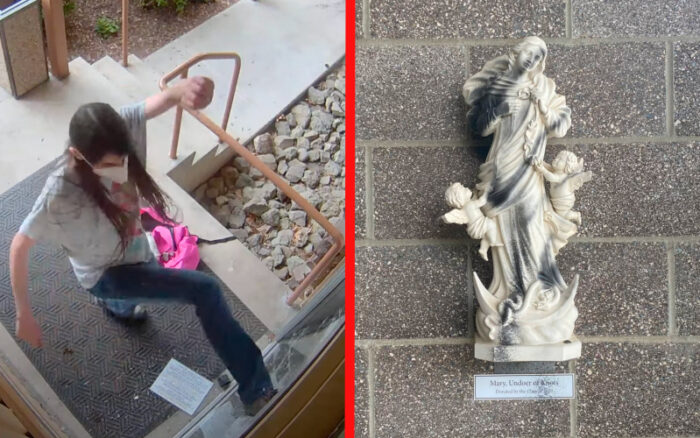 Please pray for the protection of our churches and pregnancy centers!

The parish told Catholic News Agency that the incident resulted in at least $10,000 in damage. Police arrested the suspect, but did not reveal the person’s identity.

The Bellevue Police Department posted additional images to its Twitter account, explaining they charged the suspect with assault and a hate crime.

Some of the sprayed graffiti included, “woman haters,” “groomers rapists,” and “the church is child abuse.”

Here’s the tweets below:

The first tweet reads, “Officers arrested a [31-year-old] Bellevue resident on suspicion off a hate crime and assault after allegedly spray painting St. Louise Parish, smashing two doors and assaulting an employee. The suspect was arrested without incident.”

The second tweet reads, “The graffiti painted on church walls and artifacts was anti-Catholic. According to the RCW, a hate crime includes acts that ‘Defaces religious real property with words, symbols, or items that are derogatory to persons of the faith associated with the property.’”

Here’s the photos below:

Parish priest Fr. Gary Zender led a procession and blessed the vandalized areas on Tuesday evening. He said that even though the suspect threw a rock at church property, “Christ is a rock for us.”

St. Michael the Archangel, defend us in battle! ⚔️🛡️⚔️