Driving Out a Belligerent Culture: A Priest’s Answer to Satan’s Modern Revolt Against God 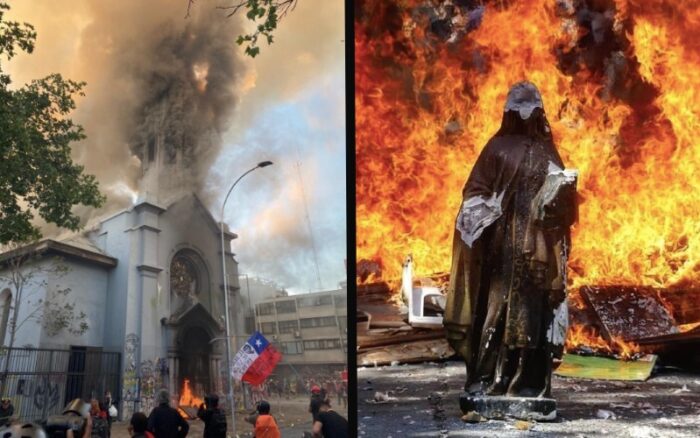 Driving Out a Belligerent Culture: A Priest’s Answer to Satan’s Modern Revolt Against God

In the Shakespeare play Julius Caesar, there is a scene in which Marc Anthony is alone with the body of the freshly assassinated Julius Caesar.

He seeks vengeance on the assassins knowing it will send Rome into a killing frenzy. From this scene we hear the words, “Cry ‘havoc’ and let slip the dogs of war!” (Julius Caesar Act III, Scene I)

This refrain plays all too quickly in our society as we fall into the hellish nightmare of belligerence and anarchy. The word belligerence comes from the Latin words ‘bellum’ (war) and ‘genere’ (to bear/carry) and means a person engaged in war.

In common usage, a belligerent person is one who looks for and pursues reasons to stir trouble and engage in violent revenge. The father of belligerence is none other than he who fomented the first ever revolution against God: the devil.

We live in a horribly belligerent society right now.

So many referred to being ‘triggered’; that is, being easily and frequently offended in such a way that justifies both the tenacity and disproportionate nature of their vengeance.

The belligerent see themselves as victims of injustice whose suffering or imagined suffering is sufficient grounds for any destruction and mayhem they may engage in to address the injustice.

They wreak havoc in the lives of all around them. It is as if they look for (even long for) reasons to be angry so that they may act out without regards for consequences.

That belligerence finds itself in our churches as well.

There are so many ways in which we find ourselves willfully polarized by everything from music to ritual to leadership. Some of the most hateful things I have seen posted on social media over the years have been Catholics showing a truly hateful belligerence to their fellow Catholics.

I have often noted how Satan cackles at our circular firing squads. As in the secular world, belligerence is all about the accrual of power.

There are times we will not be able to avoid the belligerence of others in our defense and propagation of the truth. Jesus Himself refers multiple times to parent be set against child and child against parent as some accept and follow Christ.

How do we answer belligerence? How do we stave off the desire to become belligerent against all but Satan and his minions?

“Come to me, all you that labour, and are burdened, and I will refresh you. Take up my yoke upon you, and learn of me, because I am meek, and humble of heart: and you shall find rest to your souls. For my yoke is sweet and my burden light.”

In this, we see that our lives will come with burdens, pains, injustices, and sorrows. We will have the temptation to return belligerence for belligerence. Certainly, Christ carried this reality right up the cross.

The answer lies in our willingness and ability to show meekness.

Meekness has a bad reputation as the quality of being mousy, timid, or weak. Meekness is patience, a virtue that St. Paul in Gal. 5:22 reminds us is a fruit of the Holy Spirit.

Patience is anything but weakness; patience takes incredible strength. It is the strength that Jesus had up on the cross. He shows His strength in patience and endurance. The time for judgement will come. It will be just.

Our ability to show meekness in the face of harm neither condones the harm done to us nor allows another to treat us a doormat. It shows the strength of character that reduces the mock and ridicule and provides a far stronger witness to all.

Our war footing should be directed to the devil and his forces; with them we should show nothing but scorn and forcefulness. The devil and his demons have no hope of conversion. They are eternally damned.

As for our fellow human beings, as long as they are on this side of the moment of death, the possibility, however slim, exists for possible conversion.

The Church exists for the salvation of souls.

Driving belligerence from our hearts and souls help us endure the yoke of Christ: the ability to selflessly love and show unswerving obedience to the will of the Father in all things.

Our only cry to release havoc and the dogs of war should be against the devil and his minions.

This article originally appeared on U.S. Grace Force. It is also in the newly published book, Let Freedom Ring: A 40-Day Tactical Training for Freedom From the Devil.

Our Lady’s Forgotten Message at Fa...