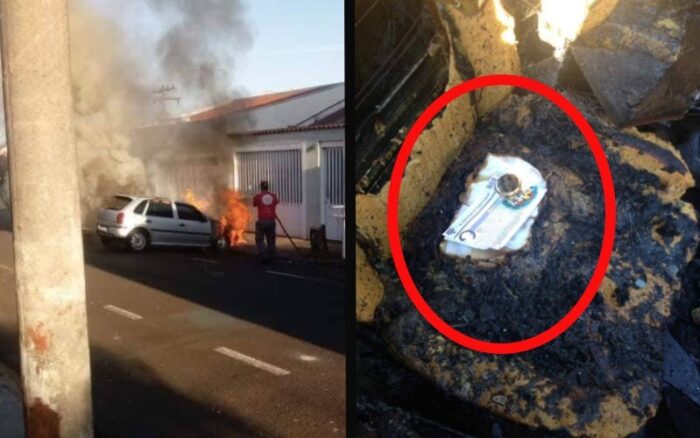 God can do anything!

Viral photos of a devastating car fire containing a Eucharistic pix, Sacred Heart of Jesus prayer, and a rosary re-surfaced on social media.

María Emília da Silveira Castaldi of Brazil left a pix, prayer, and rosary in her car after administering the Holy Eucharist as an Extraordinary Minister. She went to her car, seeing it on fire. She said everything burned except the items around the pix.

Castaldi said her  “car was placed on the street. I wanted to open it to get everything out, but they wouldn’t let me because it could burn me.”

However, Castaldi already purified the pix before the fire and it did not contain a Eucharistic host. She said she believes that if this “served as a testimony of faith for at least one person, then it was worth it.”

Here’s the photos below:

Castaldi told ACI Digital in Brazil that ““the whole car was burned, [including] a robe, the liturgy book, [and] the corporal. The [pix], the rosary, and a prayer that we pray every first Friday of the month at the Mass of the Sacred Heart of Jesus in the Cathedral of Franca remained intact. That brochure was not burned by fire or wet with water from the firefighters.”

Twitter users reacted to the resurfaced story. Here’s what they said below:

This user said, “The purpose of the fire was so Jesus could show the world He is The Christ!”

Another user wrote, “Jesus the Christ is the One who abides everywhere. For example, He (remaining on Earth), is at the same time in the Abode of God our Heavenly Father.”

This user added, “On my knees!!

What do you think about this story?

Be a Man for Others