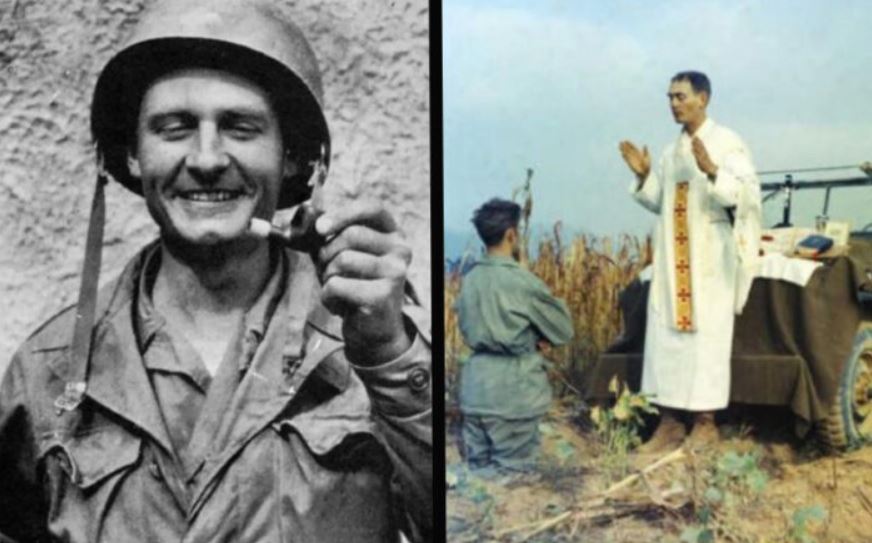 Twenty-thousand Chinese soldiers descended upon the U.S. Army’s Third Battalion as they slept in tents. Gunshots began filling the night sky, and a bloody battle ensued.

Amidst the confetti of bullets and smoke, a tall, slender man ran from foxhole to foxhole, dragging wounded soldiers out, saying prayers over the dying, and hearing confessions. His name was Father Emil Kapaun.

A quiet, unassuming man from rural Kansas who became the most decorated army chaplain in America. ⁣
⁣
Officers screamed at Kapaun to escape, but he refused. He ran 300 yards outside the U.S lines to rescue men. He attended to over 40 wounded in a dugout at this point, and the Chinese were closing in.

Kapaun spotted a captured Chinese officer and made a bold proposal. He said he would surrender and appeal to Chinese humanity. The officer yelled, and the shooting stopped. Kapaun was taken as a prisoner with 15 others, saving at least 40 men as a result. ⁣
⁣
The months that followed were beyond brutal.

Kapaun carried wounded soldiers on his back for over 100 miles in below-freezing temperatures. He spent seven months in prison camps, surviving off birdseed and snow.

He visited over 200 soldiers a day, tending their wounds, passing around a pipe with encouraging words, and leading them in the rosary. ⁣
⁣
Kapaun’s name was spoken with extreme reverence and admiration by every soldier who knew him. He called them “my boys”, and served them tirelessly. He stole food for them, built fires against command, and celebrated Mass in secret.

He woke up early to hammer together pots with metal scraps to boil water and laundered people’s clothing. Survivors say he saved hundreds of lives with his heroic bravery. ⁣
⁣
Emil Kapaun died of maltreatment in a Pyoktong death house on May 23, 1951. He was named “Servant of God” in 1993, and received the Medal of Honor posthumously in 2013 for his actions at the Battle of Unsan.

Nine of the soldiers he saved in battle were present at the ceremony.

In March of 2021, his remains were discovered among the unidentified soldiers in a mass military grave in Hawaii. On Monday, Sept. 27, his body was brought home to Wichita, Kan., an hour south of his hometown in Pilsen.

On Wed., Sept. 29, we celebrated his funeral Mass 70 years after his death.

Here’s some pictures of the heroic Fr. Kapaun: (captions below photos)

Caption: Photograph of Fr. Kapaun holding his pipe. The other half was buzzed off by a sniper bullet in the midst of the Korean War.

Caption: Father Emil Kapaun offers Mass on Oct. 7, 1950, less than a month before he was captured by North Korea.

Caption: Herb Miller was being held at gunpoint by a Chinese soldier when Father Kapaun stepped in front of him, lowered the gun, and carried Miller away. The officer was stunned and didn’t shoot either of them. Kapaun miraculously saved Miller’s life.

Servant of God Fr. Emil Kapaun, pray for us!