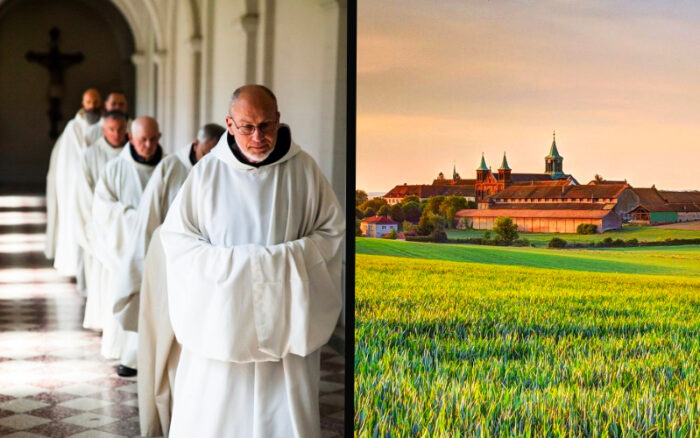 The only Trappist monastery in Alsace (in eastern France) is Our Lady of Oelenberg, located next to Mulhouse and surrounded by fields and forests.

These Alsacian monks are well known for their delicious homemade pasta and wheat flour. But the almost thousand-year-old abbey, founded in 1046, also has a very rich history!

Many historical twists and turns

In the year 1046, mother of Pope Leo IX Countess of Eguisheim Heilwige de Dabo, built a priory for the Canons of Saint Augustine.

Located on a hill (“Berg” in local dialect), and along a stream (“Oelen”), the priory naturally took the name “Oelenberg.” The community then prospered very quickly, in both wealth and vocations.

But every good story ends: wars interrupted this peaceful and flourishing life.

The 14th century was quite a terrible time for Oelenberg Abbey. Conflicts ruined and weakened the abbey, which was placed under various protections. First, an Austrian lord owned the property, followed by the Jesuits of Fribourg in 1626, and finally, the University of Fribourg in 1774.

The French Revolution was lethal to the abbey, dissolving the community.

In 1794, both the abbey and the library were sold as national property at auction. The library was dispersed, and Mulhouse sold the convent to an industrialist.

Fortunately, the monks took refuge in Switzerland, while the beloved abbey passed from hand to hand, until it finally became a boarding school for young girls in 1821.

The Rebirth of the Abbey

In 1825, the Oelenberg Abbey rose from its ashes, thanks to the return of a group of Trappist monks from exile.

Later in the XIXth century, the monks became too numerous. It forced them to send a small group, creating a foundation in Germany!

At the beginning of the 20th century, Oelenberg Abbey counted 200 Trappist monks (80 priests and 120 brothers), and became a key religious, intellectual, and economic place.

But again, the two World Wars destroyed the abbey. The buildings were bombed, and the monks dispersed.

Reconstruction was difficult and slow, but in the middle of the 20th century, Oelenberg Abbey finally came through, thanks to a real mobilization.

In particular, the Dutch Trappists from the Abbey of Zundert helped the community. It brought the The Oelenberg Abbey back to life, so much so that it even took over the Austrian Engelszell Abbey in 1925!

Despite this renaissance of the abbey, the community was no longer in good shape at the end of the 20th century. With only 15 monks left, the buildings were large and required a lot expensive maintenance.

The question then arose of leaving Oelenberg Abbey, with the aim of regrouping with another Trappist community. But in the end, the monks stayed – they were too attached to their community and abbey!

Today, Our Lady of Oelenberg Abbey has nine Trappist monks living according to the Rule of St. Benedict, “Ora et Labora,” which is latin for “pray and work.” They pray together seven times daily, with services and the Mass beginning at 4:30 a.m.

Laymen manage their 370-acre property, but the monks watch it and care for everything else, including the shop and hostelry.

As for manual work, the specificity of the Oelenberg Abbey is wheat!

The many acres surrounding Oelenberg Abbey allow the Trappists to produce exceptional flour in their mill.

With their delicious wheat flour, they produce several types of pasta: broad, fine and twisted! They also make tarts, shortbread, macaroons and biscuits. Ask the region how it tastes – everyone loves it!

Records of Jews who sought Vatican...