How NASA Sent the Virgin Mary to Mars in 2021 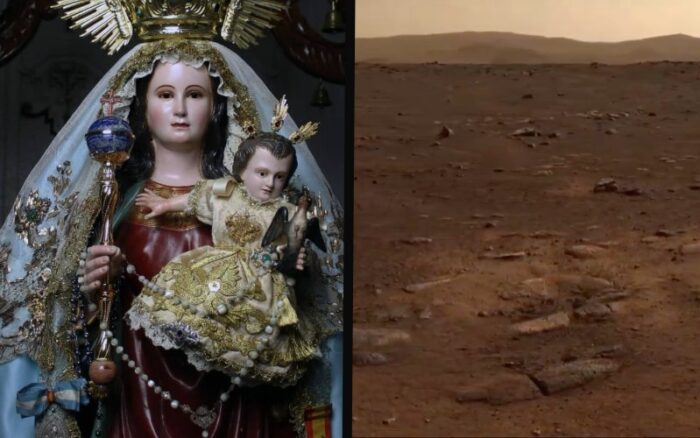 How NASA Sent the Virgin Mary to Mars in 2021

This is so cool!

NASA’s 2020 Mars expedition landed the Perseverance Rover on Mars on February 18 after a seven-month trip from earth.

However, many do not know that Our Lady traveled to Mars under the title of “Nuestra Señora de Flores” (Our Lady of Flowers), patron saint of Álora, Spain.

NASA selected inscriptions for 150,000 plates for the robot to carry to Mars. Air Force Sergeant Francisco José Fernández told Sur News that he included the Nuestra Señora de Flores’ name, for whom he has great devotion.

“The goal is that when the robot stops working for eternity, those names will be inside if someone finds the machine or if humans end up settling on Mars,” Francisco explained.

“It is exciting to know that in a few years, [her] name will be there, in space, between the valleys and deserts of Mars,” he added.

Francisco happily recounted the “Marian presence” on Mars with member of the Brotherhood of Nuestra Señora de Flores, Álvaro Fernández García-Gordillo. He said that the congregation was “surprised” and “crazy” to hear the news.

“It is always a pride that Our Lady of Flowers leaves the city, but going to Mars is very unique. It is nothing that we have thought or imagined,” Garcia-Gordillo said.

Here’s a photo of Our Lady’s “boarding pass”:

The title of Nuestra Señora de Flores (Our Lady of Flowers)

The devotion to the Nuestra Señora de Flores (Our Lady of Flowers) originated in the 15th century in Álora, Spain after the conquest of Granada. Queen Elizabeth ordered the building of a chapel in her honor. Today the chapel is a sanctuary.

This statue of Our Lady was built for the sanctuary in 1502. Our Lady holds a scepter in her right hand and the Child Jesus in her left. The Church celebrates her feast on Sept. 8.

10 Patron Saints of Marriage and M...