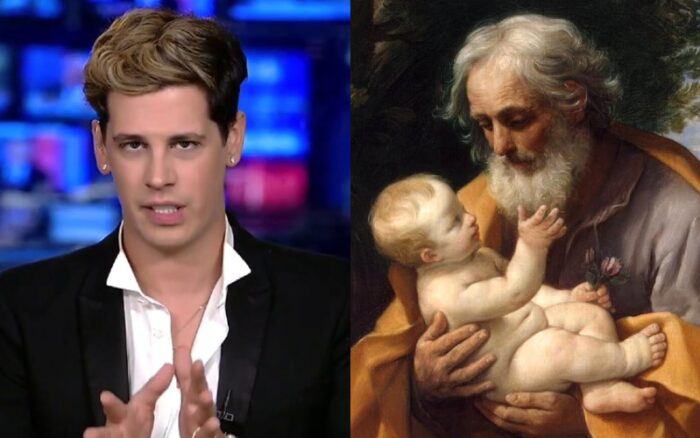 Wow! Praise God for his mercy and grace!

Conservative commentator and journalist Milo Yiannopoulos announced in a LifeSiteNews interview that he renounced his homosexual lifestyle and is consecrating his life St. Joseph.

He explained that “secular attempts at recovery from sin are either temporary or completely ineffective,” which lead to his decision to consecrate himself to St. Joseph.

“Salvation can only be achieved through devotion to Christ and the works of the Holy, Catholic, and Apostolic Church,” Yiannopoulos said.

“St. Joseph is the spiritual father figure of the Holy Family. In this time of gender madness, devoting myself to the male protector of the Infant Jesus is an act of faith in God’s Holy Patriarch, and a rejection of the Terror of transsexuals.”

Yiannopoulos added that “the guy I live with has been demoted to housemate,” and that the transition has not been easy.

“It feels as though a veil has been lifted in my house — like there’s something more real and honest going on than before. It’s been a gradual uncovering, rather than a dramatic reveal. Maybe that lack of theater or spectacle is a sign the gay impulses truly are receding?”

Bishop Joseph Strickland of the Diocese of Tyler, Texas, also asked the faithful to pray for Yiannopoulos.

Bishop Stricklands tweet reads, “St. Joseph, pray for Milo [and] for all caught up in the culture he is leaving. May the Immaculate Virgin Mary [and] all the saints pray for all of God’s children to ‘repent [and] believe the Gospel.’ God’s grace is abundant [and] His Love is everlasting.”

The Catholic Church teaches that people with homosexual tendencies “must be accepted with respect, compassion, and sensitivity,” but that homosexual acts constitute “grave depravity,” are “intrinsically disordered,” and that “under no circumstances can they be approved.” Instead, “homosexual persons are called to chastity.” (CCC 2357-2359)