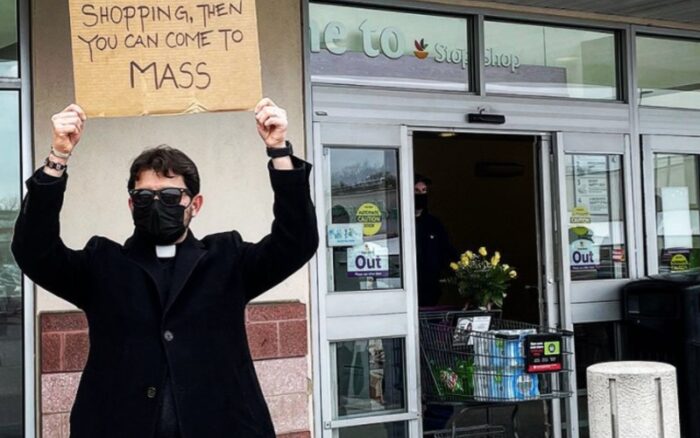 What a brave priest!

Fr. Carlos Limongi of the Archdiocese of New York posted a photo with a stirring message for local Catholics during the Covid-19 pandemic.

Many bishops dispensed the Sunday Mass obligation due to the virus. However, many churches are open throughout the country.

Because of low Mass attendance, the priest brainstormed creative ideas to encourage turnout.

Shortly before Ash Wednesday, Fr. Carlos stood outside a New York grocery store wearing a mask and sunglasses, holding a sign saying, “If you can come grocery shopping shopping, then you can come to Mass.”

Here’s the photo below:

Fr. Carlos told ChurchPOP that after he did this, Mass attendance increased “exponentially.” While he said it may be due to the lenten season, he believes the sign contributed.

“[I wanted people] to meditate upon the fact that everyone is starting to return to their normal daily lives and routines, but Mass attendance was not increasing.

“I kept thinking about ways to encourage people to come back to Mass in a way that was approachable, funny, but still truthful.”

“Lent was coming, so I figured if there was a better time to do it, it was just before lent. So I cut up the side of a box and wrote the caption on it”

“…Most people around my area go shopping or to bars and restaurants, but still say they won’t come to Mass because of virus.

“So there seems to be a disconnect with the rhetoric I heard versus what I saw on the ground.”

However, “it’s important to note that I never intended to shame or guilt people into coming to Mass, let alone make those with compromised health, feel bad for not coming to Church.

“I’ve been the first one to tell those who speak to me about the virus to stay home and be safe if their health condition would bring them harm.

“Rather, I intended to bring people to meditate upon how God fits into their lives during these times, especially now that there is some sense of normalcy, compared to what we had most of last year.

“It was meant to get them thinking, ‘If I am able now to do a lot of what I used to, shouldn’t my worship of God be given the same consideration?’”

“I cannot speak for different churches or dioceses, which is why I aimed this message at our local community.

“In my parish, we clean the church and wipe the pews after every Mass, mount hand sanitizers on the entry doors, and require mask-wearing and social distancing…(aside from following the archdiocesan guidelines and limits of people within the church.)”

“For a couple of months leading up to the picture, we started the new initiative called ‘Bring a friend to Mass’ Day.

“The first Sunday of the month, we encouraged people to invite someone to come to Mass with them–someone whom they knew could attend Mass, but did not come due to fear or just comfortability with online Masses.

“We encouraged parishioners to invite friends or family members, free of judgment or criticism.”

“No change was seen… So that’s when the picture idea came to be executed.”

What do you think of his idea?