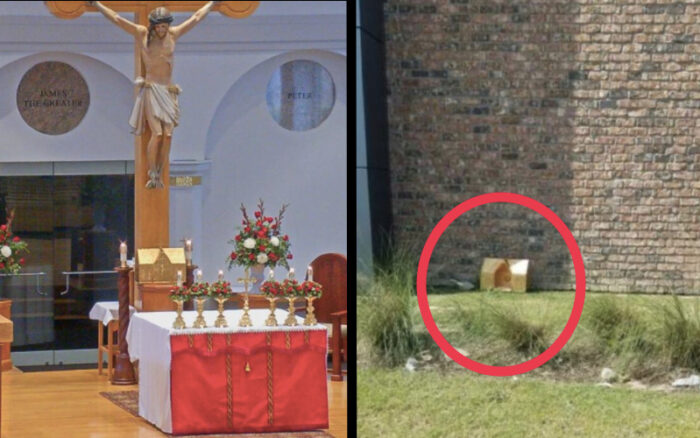 Fr. Christopher Plant of St. Bartholomew the Apostle Catholic Church in Katy, Texas announced on Mon., May 9, that thieves stole the church’s tabernacle between Sun., May 8 and Mon., May 9.

The theft follows a slew of attacks on Catholic Churches and pro-life pregnancy centers across the nation in response to the Supreme Court draft leak of Dobbs v. Jackson Women’s Health Organization.

“Our tabernacle was stolen last night,” Fr. Plant wrote in a May 9 statement on Twitter. “We don’t know who did it, but the police are investigating. Please pray for us and for those who committed this criminal sacrilege.”

Reports then circulated on Wed., May 11, that someone found the tabernacle sitting in the yard next to a Burger King restaurant.

Here’s the report below:

They found the tabernacle at a Burger King. Appears to be cracked open. Stole Our Lord and left behind the Gold. Clearly was not stolen for the money, but for something far more precious. pic.twitter.com/3Ler8MNnYZ

“They found the tabernacle at a Burger King. Appears to be cracked open,” Guadalupe Radio Network producer Adrian Fonseca wrote.

“[They] stole Our Lord and left behind the gold. Clearly was not stolen for the money, but for something far more precious.”

Here’s how some users reacted:

One user said, “This is horrifying…prayers for this church and protection from St.Michael. Those that stole this have only evil in their action. May God forgive them.

Another user commented, “The best response to this: Pray, fast, do bodily penance in reparation for this hideous sacrilege. But, most importantly, go to adoration, and show our Blessed Lord that you love Him in the most Holy Eucharist, and that you will not abandon Him.”

Just days before the theft, the pro-abortion group Ruth Sent Us threatened to “burn the Eucharist” in a Twitter post.

I'm offering my Rosaries this weekend for the protection of the clergy and Mass-goers, the police/security, and for the safety and change-of-heart of the pro-abortion protestors.❤️‍🔥❤️‍🔥❤️‍🔥

“Stuff your rosaries and your weaponized prayer. We will remain outraged after this weekend, so keep praying,” the tweet reads.

“We’ll be burning the Eucharist to show our disgust for the abuse Catholic Churches have condoned for centuries.”

Act of Reparation for Blasphemy – The Golden Arrow Prayer

May the most holy, most sacred, most adorable,
most mysterious and unutterable Name of God
be always praised, blessed, loved, adored, and glorified
in heaven, on earth, and under the earth,
by all the creatures of God, and by the Sacred Heart
of Our Lord Jesus Christ in the Most Holy Sacrament of the Altar.

‘Everyone was crying’: An eyewitne...