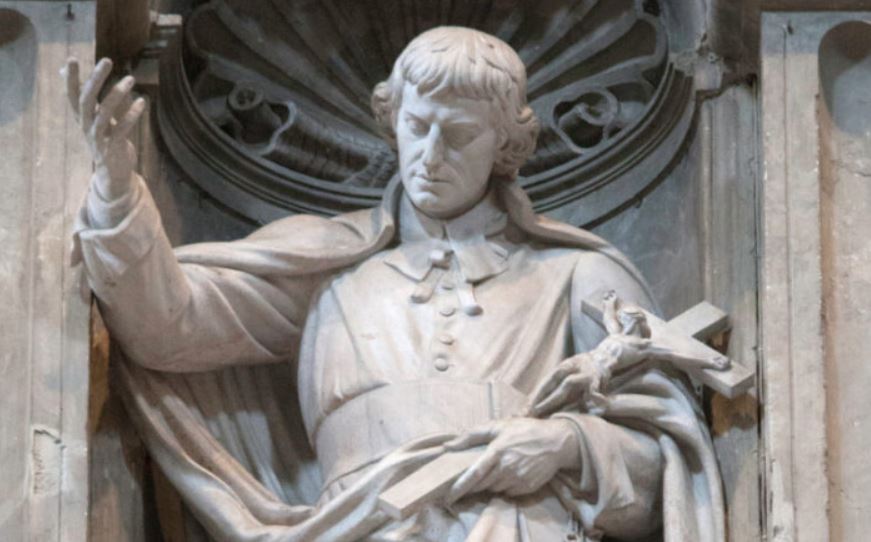 For over a century, St Louis de Montfort’s masterpiece the Treatise on True Devotion to the Blessed Virgin remained completely hidden and mysteriously concealed.

Although St Louis wrote the book in the early 1700s, it was only in 1842 that the manuscript was unearthed by a librarian at the mother-house of the Montfort Fathers at St. Laurent-sur-Sèvre, France.

Was the manuscript discovered by chance or Providence?

It seems the latter.

St Louis himself foretold that his book would be exposed to vicious attacks and kept hidden by Satan who would try to suppress any means of spreading the ‘true devotion’ to Our Lady.

“I clearly foresee that raging beasts will come in fury to tear to pieces with their diabolical teeth this little book and the one the Holy Spirit made use of to write it, or they will cause it at least to lie hidden in the darkness and silence of a chest and so prevent it from seeing the light of day.

“They will even attack and persecute those who read it and put into practice what it contains. But no matter! So much the better!

“It even gives me encouragement to hope for great success at the prospect of a mighty legion of brave and valiant soldiers of Jesus and Mary, both men and women, who will fight the devil, the world, and corrupt nature in the perilous times that are sure to come.” (True Devotion to Mary, n. 114).

Despite his death in 1716, his work and lasting mission lived on. During the French Revolution in the 1790s, civil authorities rigorously searched the records and documents held by the Missionaries of the Company of Mary in the mother-house at St. Laurent-sur-Sèvre, the order that St Louis founded.

To avoid the seizure or destruction of important texts, the missionaries entrusted many manuscripts to local farmers for concealment and protection. The manuscripts were buried in old wooden trunks and chests underground in nearby farms.

And for a long time, St Louis de Montfort’s treasure-trove, Treatise on True Devotion to the Blessed Virgin lay hidden and forgotten.

It was only after the Revolution had passed that any books and manuscripts were discovered and returned to the library of the missionaries. After over 100 years, on April 22, 1842,  mother-house librarian Fr. Rautureau stumbled upon the old and decrepit manuscript.

As the priest remarked:

“After I had read a few pages…I took it, hoping to find it useful for making a sermon on our Lady. I read by chance the place where he speaks of his Company of Mary.

“I recognized the style and thoughts of our venerable founder, and his way of addressing his missionaries; and after that, I had no doubt the manuscript was his. I took it to our superior, who identified the handwriting.”

After the official stamp and handwriting of the founding father of the Company, Fr. de Montfort, was verified, the superior general at the time joyously announced, “We have found a treasure!”

The book was successfully published in 1843 and has since endured through the ages. As Pope St John Paul II declared, St. Louis’ work was “destined to become a classic of Marian spirituality”.

St Louis’ mission was to bring together a small band of good priests under the banner and protection of Our Lady, to evangelize to the poor and instill a great love for the Blessed Virgin in the hearts of all.

He travelled across France on foot to live and preach among the sick, poor, and needy, and was known as a mystic, missionary, and an extraordinary preacher.

He strove to win over souls by encouraging complete belonging to Christ through Mary.

As St Louis wrote, “I am all yours, and all that I have is yours, O most loving Jesus, through Mary, your holy Mother.” (Treatise on True Devotion, n. 233).

‘Pour, pour into the bosom and the heart of Mary all your treasures, all your graces, all your virtues. She is a spiritual vessel, she is a vessel of honor, she is a marvelous vessel of devotion—Vas spirituale, vas honorabile, vas insigne devotionis’ (Treatise on True Devotion, n. 178).

But what of St Louis de-Montfort’s foretelling of future events that are yet to unfold?

In True Devotion to Mary, St. Louis foresees that devotion to Our Lady will be especially necessary in the latter times where there will be a great revival of faith.

St. Louis envisages that “Almighty God and his holy Mother are to raise up great saints who will surpass in holiness most other saints as much as the cedars of Lebanon tower above little shrubs.” (n. 47)

These great saints, soldiers, and servants of Our Lady “will be ministers of the Lord who, like a flaming fire, will enkindle everywhere the fires of divine love. They will become, in Mary’s powerful hands, like sharp arrows, with which she will transfix her enemies.” (n. 56)

“They will be like thunder-clouds flying through the air at the slightest breath of the Holy Spirit. Attached to nothing, surprised at nothing, troubled at nothing, they will shower down the rain of God’s word and of eternal life.

“They will thunder against sin, they will storm against the world, they will strike down the devil and his followers and for life and for death, they will pierce through and through with the two-edged sword of God’s word all those against whom they are sent by Almighty God.” (n. 57)

“They will combat with one hand, and build with the other: they will overthrow, rout, and crush heretics and their heresies, schismatics and their schisms, idolaters and their idolatries, sinners and their wickedness; they will build the temple of the true Solomon and the mystical city of God.” (n. 48)

When we are burdened with life’s troubles and tribulations, let us not forget that God has a Divine Plan for our lives and that He has destined us for greatness, especially when the trials around us are great.

All things happen for a Providential reason – though it may take a multitude of years to see God’s mysterious plans unfold.

Cardinal Pell: ‘The duty of the Ge...