This Bible Verse Was Hidden in the 666,666th Block of the Bitcoin Blockchain 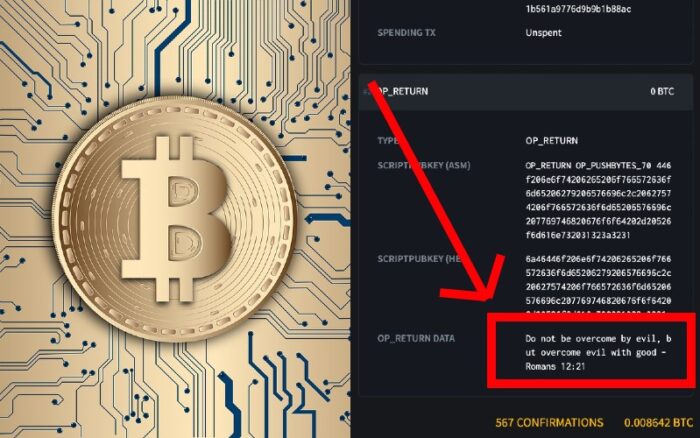 This Bible Verse Was Hidden in the 666,666th Block of the Bitcoin Blockchain

Someone snuck a Bible verse in to the 666,666th block on the Bitcoin blockchain – and you’ll be happy to see which one they chose.

But first off, what does this even mean? A lot could be said about how Bitcoin works, but the key part you need to know to understand what’s going on here is that about every 10 minutes a new “block” of Bitcoin transactions are confirmed and cryptographically “chained” to the block before it, creating chain of blocks, or “blockchain.” The first block, also called the “genesis block,” was created on January 3, 2009. And the 666,666th block (the number is just the order it was created) was just create a few days ago.

The number “666” has particular significance for Christians, since the book of Revelation calls it the “number of the beast.” The fact that this block was the 666,666th one created is just happenstance, but someone took it as an opportunity to sneak in an appropriate Bible verse. They were able to do this because Bitcoin transactions are able to have short messages attached to them

One of the transactions included in the 666,666th blockchain had this message: “Do not be overcome by evil, but overcome evil with good – Romans 12:21“.

Not only that, but they also split their transaction between two different Bitcoin addresses, which themselves also had some hidden words:

It’s good to see that someone took the opportunity of the 666,666th block not to blaspheme, but to honor God. Praise the Lord!

Be a Man for Others