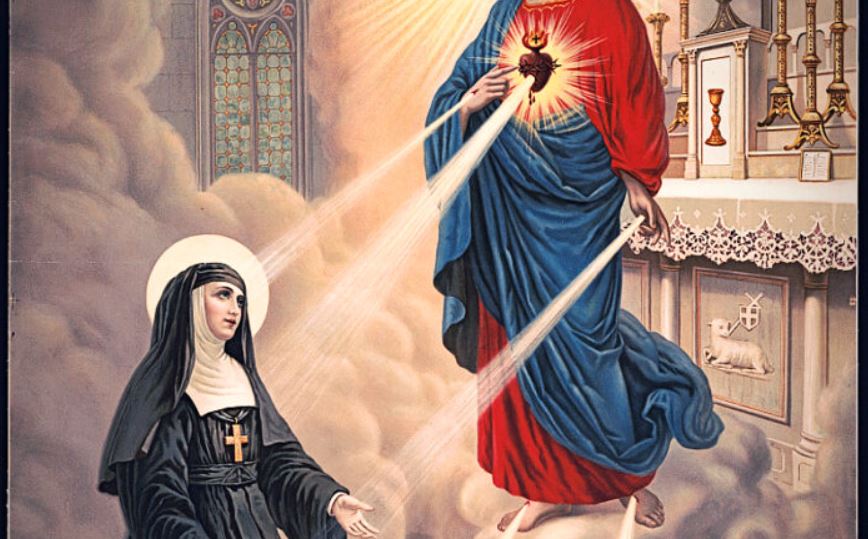 St. Margaret Mary Alacoque was a French nun of the Order of the Visitation of Our Lady. Jesus appeared to her four times in Paral-le-Monial, France, revealing his love for humankind through His Sacred Heart.

Below are excerpts from the four revelations in St. Margaret Mary Alacoque’s diary.

“One day…I was praying before the Blessed Sacrament, when I felt myself wholly penetrated with that Divine Presence, but to such a degree that I lost all thought of myself and of the place where I was, and abandoned myself to this Divine Spirit, yielding up my heart to the power of His Love.

“He made me repose for a long time upon His Sacred Breast, where He disclosed to me the marvels of His Love and the inexplicable secrets of His Sacred Heart, which so far He had concealed from me. Then it was that, for the first time, He opened to me His Divine Heart.”

“It seems to me that this is what took place”:

“My Divine Heart is so inflamed with love for men, and for you in particular that, being unable any longer to contain within Itself the flames of Its burning Charity, It must spread them abroad by your means, and manifest Itself to them (mankind) in order to enrich them with the precious graces of sanctification and salvation necessary to withdraw them from the abyss of perdition. I have chosen you as an abyss of unworthiness and ignorance for the accomplishment of this great design, in order that everything may be done by Me.”

“After this, He asked me for my heart, which I begged Him to take. He did so and placed it in His own Adorable Heart, where He showed it to me as a little atom which was being consumed in this great furnace, and withdrawing it thence as a burning flame in the form of a heart, He restored it to the place whence He had taken it saying to me:”

“My well-beloved, I give you a precious token of My love, having enclosed within your side a little spark of its glowing flames, that may serve you for a heart and consume you to the last moment of your life; its ardor will never be exhausted, and you will be able to find some slight relief only by bleeding.

“Even this remedy I shall so mark with My Cross, that it will bring you more humiliation and suffering than alleviation. Therefore, I will that you ask for it with simplicity, both that you may practice what is ordered you and also to give you the consolation of shedding your blood on the cross of humiliations.

“As a proof that the great favor I have done to you is not imagination, and that it is the foundation of all those which I intend further to confer upon you, although I have closed the wound in your side, the pain will always remain. If before, you have taken only the name of My slave, I now give you that of the beloved disciple of My Sacred Heart.”

“The Divine Heart was presented to me in a throne of flames, more resplendent than a sun, transparent as crystal, with this adorable wound. And it was surrounded with a crown of thorns, signifying the punctures made in it by our sins, and a cross above signifying that from the first instant of His Incarnation…”

“My Divine Master revealed to me that it was His ardent desire to be known, loved and honored by men, and His eager desire to draw them back from the road to perdition, along which Satan is driving them in countless numbers, that induced Him to manifest His Heart to men with all the treasures of love, mercy, grace, sanctification and salvation that It contains.”

“This Heart of God must be honored under the form of His heart of flesh, whose image He wanted exposed, and also worn on me and on my heart.

“Everywhere this holy image was exposed to be honored, He would pour fourth His graces and blessings. This blessing was, as it were, a final effort of His love. He wanted to bestow upon men during these final centuries such loving redemption in order to snatch them from the control of Satan, whom He intended to destroy.”

“One day, as I knelt before the Blessed Sacrament exposed on the altar…Jesus Christ, my sweet Master, presented Himself to me, all resplendent with glory, with His five wounds shining like so many suns.

“From all parts of His Sacred Humanity there issued flames but especially from His adorable breast, which was like a furnace.

“Opening it, He showed me His loving and lovable Heart as the living source of those flames. Then he revealed to me all the unspeakable marvels of His pure love, and the excess of love He had conceived for men from whom He had received nothing but ingratitude and contempt.

“‘This is more grievous to Me,’ [Jesus] said, ‘than all that I endured in my Passion. If they would only give Me some return of love, I should not reckon all that I have done for them, and I would do yet more if possible. But they have only coldness and contempt for all My endeavors to do them good. You, at least, can give Me the happiness of making up for their ingratitude, as much as you can.”

“First, you are to receive me in the Blessed Sacrament as often as obedience will allow, no matter what mortification or humiliation it may entail. Moreover, you are to receive Holy Communion on the First Friday of each month, and every night between Thursday and Friday I will make you partaker of that sorrow unto death which it was My will to suffer in the Garden of Olives.

“This sorrow will reduce you, without your understanding how, to a kind of agony more bitter than death. To join with Me in the humble prayer which I then offered to My heavenly Father in agony you are to arise between eleven and twelve o’clock, and remain with Me upon your knees for an hour, with your face to the ground, to appease the anger of My Eternal Father, and to ask of Him pardon for sinners.

“You will thus share with Me, and in a manner soothe the bitter grief I suffered when my disciples abandoned Me and I was constrained to reproach them that they could not watch with Me even for an hour. During that hour you are to do what I will teach you.”

“One day, during the octave of Corpus Christi, when being before the Blessed Sacrament, I received from my God extraordinary proofs of His love.

“As I earnestly desired to make some return of love, [Jesus] said to me: ‘You could not show me greater love than by doing what I have already so many times demanded of you.’

“And [opening] to me His Divine Heart: ‘Behold this Heart which has so loved men that It spared nothing, even going so far as to exhaust and consume Itself, to prove to them Its love. And in return, I receive from the greater part of men nothing but ingratitude, by the contempt, irreverence, sacrileges and coldness with which they treat Me in this Sacrament of Love.

“But what is still more painful to Me is that even souls consecrated to Me are acting in this way. Therefore I ask of you that the first Friday after the octave of Corpus Christi be dedicated as a feast in honor of My Heart, and amends made to It in an Act of Reparation offered to It and by the reception of Holy Communion on that day, to atone for the outrages It has received during the time It has been exposed on the Altars.

“‘I promise you that My Heart will open wide and pour forth lavishly the influence of Its Divine love on all who will render and procure for It this honor.’”

Sacred Heart of Jesus, please have mercy on us!

The Rise and Fall of the Sacred He...