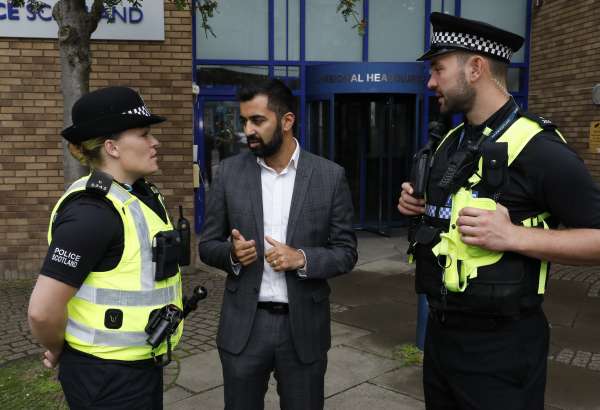 CNA Staff, Oct 29, 2020 / 03:01 pm (CNA).- Amid a contentious debate in Scotland over a proposed hate crimes law, which the Catholic bishops of the country oppose, a cabinet minister this week suggested that the law could apply to speech uttered within a private dwelling if the speaker intends to stir up hatred.

The proposed legislation creates a new crime of stirring up hatred against any of the protected groups covered by the bill, which include race, religion, sexual orientation, and transgender identity.

During an Oct. 27 hearing, a Scottish parliament member questioned Justice Secretary Humza Yousaf about whether the bill might include a defense for speech uttered in the privacy of one’s home, a so-called “dwelling defense.”

“My concern with the dwelling defense…as a parliament, [and] even as a society, are we comfortable with giving a defense in law to somebody whose behavior is threatening or abusive— as an example, that is intentionally stirring up hatred against Muslims— are we saying that that is justified because it is in the home?” Yousaf replied.

“Are we saying that as a society we are comfortable with no criminal sanctions being applied to people because that has been done in the confines of their dwelling? Whereas if they stepped out into the street outside of the house, then that would be a criminal offense? I’m just not convinced as a point of policy or principle that it is one that I agree with, but I will continue to keep an open mind.”

Conservative MSP Adam Tompkins subsequently questioned Yousaf on how you can commit an “offence of public order” in private, to which Yousaf replied that if the intent to stir up hatred is present in a private dwelling, then that could deserve criminal sanction.

Bishop Joseph Toal of Motherwell wrote in a letter earlier this month that “we can only truly respect other people’s point of view if we first allow them to express it.”

“In the hope that we will remain a country, where constructive dialogue flourishes, the Catholic Church will continue to argue for further change to this legislation to include; more equitable and robust freedom of expression provisions; greater clarity around the definitions of ‘hatred’, ‘abusive’ and ‘insulting’ which remain precariously vague and urge consideration be given to appropriate defenses which reflect the change to intent only,” Toal wrote Oct. 13.

The bill has proven controversial with the Scottish public. In the 12 week consultation period after the bill’s introduction, members of the public made nearly 2,000 submissions to the Scottish Parliament.

On Sept. 23, Yousaf told the Scottish Parliament that the bill would now only cover offences where the stirring up of hatred is intentional, the BBC reported.

The bill originally provided for penalties for “stirring up hatred” “with the intention” of doing so, or “where it is a likely consequence that hatred will be stirred up against such a group.”

In a statement issued July 29, the Catholic bishops of Scotland argued that the bill could lead to censorship of Catholic teaching.

The Scottish bishops stated that the bill “creates an offense of possessing inflammatory material which, if taken with the low threshold contained therein, could render material such as the Bible, the Catechism of the Catholic Church and other texts such as Bishops’ Conference of Scotland submissions to government consultations, as being inflammatory under the new provision.”

The bishops also noted that pronouncements of Catholic teaching on sex and gender “might be perceived by others as an abuse of their own, personal worldview and likely to stir up hatred.”

“The growth of what some describe as the ‘cancel culture’— hunting down those who disagree with prominent orthodoxies with the intention to expunge the non-compliant from public discourse and with callous disregard for their livelihoods— is deeply concerning,” they wrote.

The original text of the bill includes a provision meant to protect religious freedom of expression, stating that “behaviour or material is not to be taken to be threatening or abusive solely on the basis that it involves or includes…discussion or criticism of…religion, whether religions generally or a particular religion…religious beliefs or practices…proselytising, or…urging of persons to cease practising their religions.”

Yousaf also stated during the Oct. 27 hearing that he would be open to including freedom of speech protections to cover all of the protected categories in the bill; currently it only includes protections for certain statements about religion and about sexual orientation.

The Parliament’s Justice Committee is reviewing the 2,000 public comments received and is currently hearing testimony. The committee will aim to complete its Stage 1 report by Dec. 18, though the date could be pushed back, the BBC reported.

Scotland has experienced significant sectarian division since the Scottish Reformation of the 16th century, which led to the formation of the Church of Scotland, an ecclesial community in the Calvinist and Presbyterian tradition which is the country’s largest religious community.

Sectarianism and crimes motivated by anti-Catholicism have been on the rise in Scotland in recent years, and Catholics in Scotland are increasingly concerned that the government could consider their faith “hate speech,” according to local reports.