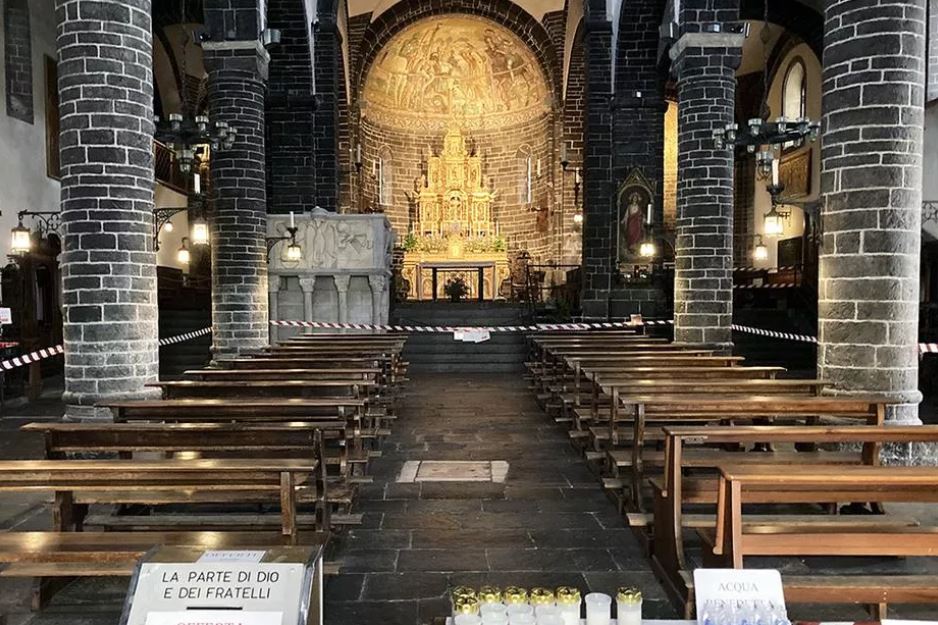 In a recent letter, Cardinal Robert Sarah stressed that the measures “given by the bishops and episcopal conferences expire when the situation returns to normal.”

Dioceses in Italy are continuing to implement COVID-19 restrictions, including generally strict rules on how to receive Holy Communion, as records show increasing numbers of coronavirus cases in the weeks leading into autumn.

As when Italy had the most COVID-19 cases in Europe earlier this year, Lombardy remains the region with the highest number of infections, but cases are also growing in Lazio (the region where Rome is located), Veneto and Campania. Overall the number of COVID infections in the central and southern regions of Italy are increasing faster than the north, the opposite of what happened in the Spring.

The country’s former prime minister, Silvio Berlusconi, has been among those infected, and was hit relatively hard. The 83-year-old billionaire media mogulsaidSept. 18: “I was afraid, I suffered and I’m still overwhelmed, but I never stopped trusting in God’s help and in the professionalism of the doctors and health workers who have been extraordinary.” He said he knew what other COVID-19 patients were going through but urged them not to “lose faith.”

“It is a bad disease but you can win,” he said.

In anotesent to parishes Sept. 8, the Vicariate of Rome and other dioceses stressed the need to continue keeping a distance of at least one meter between the faithful during liturgical celebrations (unless in a family or assisting the disabled etc.) and, despite somedisputingthe science behind it, to wear a mask that covers both nose and mouth.

Parish choirs were finally given the green light to resume accompaniment of the liturgies. Meanwhile, the rules prescribed in June continue to apply, such as thorough daily cleaning of churches, supply of hand sanitizers and adequate signage including different routes for entry and exit. For catechesis classes, families are obliged to sign a “co-responsibility pact” with their catechist.

Noticeably missing from any of the directives, however, has been any instruction on reception of Holy Communion. And yet in Rome, and in what some have told the Register is 90% of dioceses around the country, Communion is received only in the hand, despite such a rule not being explicitly stated in the bishops’ conferenceprotocoljointly issued with the government in May.

This has led to reports of many faithful who receive only on the tongue choosing not to receive Holy Communion in the hand, in accordance with their conscience.

Such restrictions do not apply everywhere, however, and in some dioceses, such as San Remo in the northern region of Liguria, this rule has been ignored and only social distancing enforced, leaving priests free to distribute Holy Communion as they wish.

“To be precise, almost all priests there distribute Holy Communion on the tongue,” said Luigi Casalini, editor of the blogMessainlatino,adding that they usually practice the “Eastern” way of using tweezers.

“Almost everywhere else, on the other hand, the bishops have not only ‘legally’ obliged the priests to distribute Holy Communion in the hand, such as Cremona and Mantova, but they also persecute the parish priests who, afterward or in the sacristy, give Communion on the tongue,” Casalini said.

He added that reports have also emerged of “formal reminders” being issued by bishops to those priests who do not obey. “In some churches it is even forbidden to kneel (even outside the Eucharistic liturgy,” Casalini said, something Ireportedon recently when visiting the northern parish of Bellagio.

Casalini mentioned that some bishops “tolerate” exceptions if they are “not very publicized,” but that some parishes and shrines that have tried to continue to distribute on the tongue have been “quitting on the orders of their bishops.”

Reports have also emerged of some diocese with Masses in the Extraordinary Form have had Holy Communion kneeling and on the tongue prohibited, or even the Mass banned altogether. In July, the main liturgist in the northern diocese of Cremona, located in one of Italy’s hardest-hit regions six months ago, declared that Communion on the tongue was a liturgical abuse, despite the practice dating back 800 years and Communion in the hand allowed by Pope Paul VI only as an exception in the 1970s.

According to the Italian Vaticanist Aldo Maria Valli, parishioners who frequented Mass in the Extraordinary Form in Cremonawroteto the liturgist, Don Davide Piazzi, asking to continue receiving Holy Communion kneeling and on the tongue. They noted that the government regulations did not specify any method of distributing Holy Communion for Eastern liturgies, neither was any rule explicit in the Italian bishops’ May protocol with the government.

The parishioners also argued that doctors have said distribution in the hand is not a safer method. “Can we discuss it serenely and find a solution?” they asked. “Ours is a beautiful experience and we do not want it to be troubled by diatribes or conflicts, just to know when we can finally resume the public celebration of the Holy Mass.”

But the liturgist responded by informing them that the bishop had authorized him to suspend the Mass in the Extraordinary Form, arguing that the parishioners saw the method of receiving Holy Communion “more binding” than the matter of communing itself — “so much so,” he added, “as to lead you not to obey the Lord’s command, ‘Take… eat.’”

Valli said that, in short, the Church had “slammed the door in the face of the faithful” and seemed to say: “Aren’t you doing as I say? Then I will take away the Mass. I’m not obliged to celebrate it.”

This kind of approach, which he called “North Korean,” is reportedly quite common, said Casalini, recounting how a parish priest was denounced because he distributed Holy Communion on the tongue to about 30 people. The priest now distributes the Eucharist in the sacristy. “In the South, almost all the bishops distribute Communion in the hand in a ‘Korean’ way,” Casalini said. “I know that in Liguria it is better.”

In his recentletterto bishops on returning to the Eucharist, Cardinal Robert Sarah did not explicitly address the Communion-in-the-hand controversy, but instead made a more general statement. “The faithful should be recognized as having the right to receive the Body of Christ and to worship the Lord present in the Eucharist in the manner provided for, without limitations that go even beyond what is provided for by the norms of hygiene issued by public authorities or bishops,” he wrote.

The prefect for the Congregation for Divine Worship and the Discipline of the Sacraments added that a “sure principle in order not to err is obedience,” adding that “in times of difficulty,” bishops and episcopal conferences “can give provisional norms which must be obeyed. Obedience safeguards the treasure entrusted to the Church.”

He also stressed that the measures “given by the bishops and episcopal conferences expire when the situation returns to normal.”