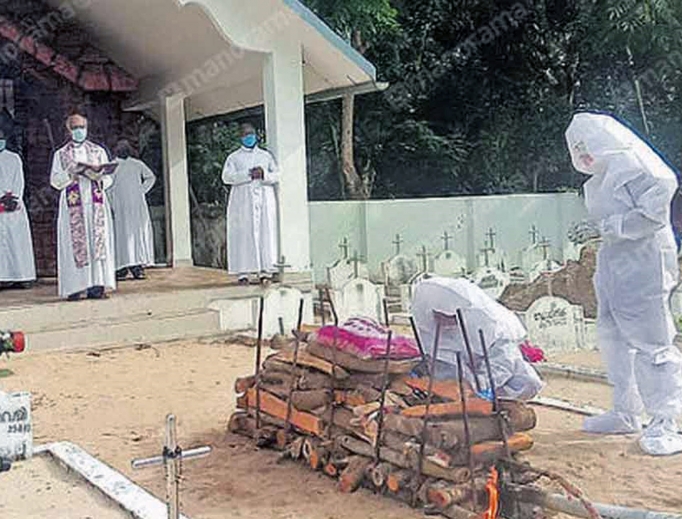 With the death toll from the virus continuing to climb, Church leaders have authorized cremations even though the burial practice is viewed locally as a Hindu custom, not a Christian one.

THRISSUR, India — Amid increasing deaths from India’s worsening COVID-19 pandemic, the local Church is reluctantly opting for cremation instead of traditional Christian burial for the victims.

“Our options are limited. We have had five cremation-burials already, including one yesterday,” Bishop James Anaparambil of Aleppy, in the southern state of Kerala, told the Register Aug. 10.

India’s daily COVID-19 death toll crossed 1,000 on Aug. 9 for the first time, along with more than 62,000 new cases, giving India the dubious distinction of recording the most number of cases in the world that day.

“Under COVID protocol, the burial pit has to be 10-feet deep,” explained Bishop Anaparambil, who heads the Diocese of Aleppy, spread along the Arabian Sea coast. “But we cannot dig more than 2 feet due to the water level. Apart from this, there is a lot of fear against burying the COVID victims in the congested cemeteries.”

Though canon law permitscremation, Christians in India seldom cremate the dead, as it is widely considered a Hindu custom. The Catechism of the Catholic Church also states, “The Church permits cremation, provided that it does not demonstrate a denial of faith in the resurrection of the body” (2301). And the ashesmust be buried.

So Bishop Anaparambil held an emergency meeting and granted permission for the first cremation when an elderly Catholic parishioner of Mararikkulam died of COVID-19 July 28.

“I had no fear. But I was worried how the people would react if a body was cremated in the parish cemetery,” Father Bernard Panikkaveettil, vicar of St. Augustine’s parish, who led the funeral, told the Register. After the body was cremated at an open space in the cemetery, he oversaw the collection of the ashes into an urn and their burial in the cemetery with formal prayers.

“The people have accepted the decision without any criticism. They know there is no alternative in the present situation,” Father Panikkaveettil said.

In fact, following this Christian cremation that generated substantial news coverage, several other Christian denominations also declared that wherever Christian burial was not possible as per public-health protocol, local congregations could resort to cremation. These included Orthodox, Jacobite and Protestant churches.

India’s largest Christian heartland, with more than 6.5 million Christians, Kerala has one of the nation’s highest population densities, of 858 people per square kilometer (three times higher than the national average). As a consequence, church cemeteries are short of space for COVID-19 protocol burials.

The Indian state has also seen reports of opposition and protests against the burial of COVID victims in the crammed church cemeteries, which forced Cardinal George Alencherry, head of the Catholic Church in Kerala, to issue a press statement decrying “lack of respect for the dead.”

“The fear about the burial of the COVID victims in the cemeteries and inhuman behavior in opposing it is painful,” said Cardinal Alencherry in his July 28 press statement, responding to protests in the Archdiocese of Ernakulam and elsewhere over burial of victims in church cemeteries in accordance with government norms.

When Wilson Paul of Chemmanda died of COVID at the end of July, the Lourdu Matha parish in the Diocese of Irinjalakkuda had to take an unprecedented step — taking his body for cremation in the nearest Hindu electric crematorium on Aug. 1.

“We could not dig deep in the cemetery due to low water level in the monsoon season. We also could not have open cremation, as it was raining,” Father Benny Cheruvathoor, the parish priest of Chemmanda, recounted to the Register.

“There was only one option before us. We decided to take the body for cremation, with the consent of the family, to the [Hindu] crematorium. We had the initial prayer there and later brought the ashes in an urn (placed in a coffin) for the funeral in the church cemetery,” said Father Cheruvathoor, who led the funeral service from the Hindu crematorium to the church cemetery.

Following such developments, the neighboring Archdiocese of Thrissur has decided to set up its own crematorium so that bodies of Christians need not be taken to a Hindu crematorium if the need arises.

Though Kerala state was initially acclaimed worldwide for curbing COVID-19 cases, with the return of hundreds of thousands of Keralites working in other Indian states and the Gulf countries, the state has been witnessing a rapid spike in coronavirus cases, with its tally shooting up from fewer than 1,000 positive cases to 34,000 in just two months.

“Space is a big problem in our cemeteries. We have already applied to the government for permission to set up a crematorium,” Syro-Malabar Catholic Archbishop Andrews Thazhath of Thrissur told the Register.

However, Archbishop Anil Couto of Delhi shared with the Register that the necessary final rites for those dying of COVID in the national capital have led to a different situation, although Catholics there, too, have to cremate the dead due to space constraints in packed Christian cemeteries.

When Sister Ajaya Mary, a provincial of the Franciscan Sisters of the Immaculate Heart of Mary, died of COVID on July 2, the nun’s congregation wanted her body to be flown home to Kerala. However, due to the governmental ban on transporting dead bodies of COVID victims, Archbishop Couto noted, the body was cremated in Delhi instead.

“I led the requiem Mass for the nun with the urn,” remarked Archbishop Couto. “We are in an unprecedented situation and have to adapt to the situation.”