Creator of “Kneeling Santa” was Lifelong Catholic and Activist 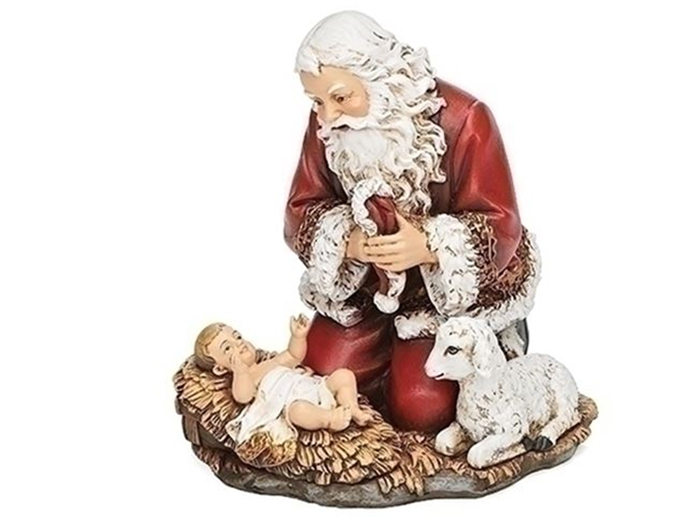 Creator of “Kneeling Santa” was Lifelong Catholic and Activist

The Kneeling Santa idea came to Ray Gauer while he was on retreat at a Trappist Monastery in Kentucky in the 1940s.

Gauer was born in Chicago, where he attended both Catholic and public schools. During World War II, he served in the U.S. Navy, but contracted tuberculosis and was discharged in 1947. He recovered, married wife Ella and became the father of seven children. He studied accounting at DePaul University and moved to Hollywood, California, in 1954.

He wrote a letter to the Hollywood Chamber of Commerce, opining that such a business would be a detriment to the community. That very same week, police raided and closed the shop. Delighted with the quick response, he wrote the mayor of Los Angeles and suggested that the same action be taken there. Once again, the city took quick action, raiding six such shops and confiscating seven tons of pornographic materials.

A Torrance physician took note of Gauer’s success and asked him to help launch a local branch of Citizens for Decent Literature (later Citizens for Decency through Law) to oppose pornography. CDL was founded in Cincinnati, Ohio, by a successful Catholic attorney Charles H. Keating, Jr. (who was made famous by his involvement in a savings and loan scandal). Keating helped Gauer secure a grant from the Reader’s Digest Foundation to open a national office for CDL in Los Angeles in 1967, for which Gauer left a more lucrative job to become its full-time director. That same year, the U.S. Supreme Court overturned the obscenity findings in 26 lower court cases, which, as Gauer noted, “in one fell swoop had effectively wiped out anti-obscenity laws in this country.”

For the next 11 years, Gauer became a national crusader for public decency on hundreds of radio and television programs — including Johnny Carson’sTonight ShowandThe Merv Griffin Show— at college campuses, church and civic groups, service clubs and anywhere else he would be heard.

He and an associate, James Clancy, played an instrumental role in the defeat of Abe Fortas for Chief Justice of the U.S. Supreme Court, nominated by Fortas’ close friend President Lyndon Johnson to replace the retiring Earl Warren. Before coming to the court, Fortas had represented pornographer William Hamling, and as a justice had voted to overturn the 26 obscenity cases — one of which involved Hamling, which Gauer saw as a conflict of interest.

Gauer’s CDL efforts were supported by Cardinal Timothy Manning of Los Angeles, once pastor of Gauer’s parish. Cardinal Manning called pornography “the number one weapon of the devil,” and told Gauer in 1973, “You are a Simon of Cyrene — helping to carry our cross.” Other prominent friends included actress Loretta Young and W.W. Hodkinson, founder of Paramount Pictures. Gauer resigned as CDL national director in 1976, and for two years headed up the district office of a fiery young U.S. congressman who had joined Gauer in his anti-pornography campaign, Robert Dornan.

Perhaps Gauer will be especially remembered for the Kneeling Santa, an idea which came to him on retreat at a Trappist Monastery in Kentucky in the late 1940s. His plan was to depict Santa Claus kneeling before the Infant Christ, because, as he explained, “Santa Claus is really St. Nicholas and would be the last person to detract from the real reason for the season — the birth of Christ.”

Gauer tried for years to interest others in his idea — including Walt Disney — but it wasn’t until 1976 that Gauer brought his Santa vision to reality, the same year he got his law degree. A chance meeting with the religious woodcarving artist Rudolph Vargas led to a hand-carved prototype that made the kneeling Santa an international symbol of Christmas. It is made and marketed by Roman, Inc. in Chicago, a major distributor of religious articles.

Gauer was a daily communicant at Ss. Simon and Jude Parish in Huntington Beach in the Diocese of Orange, California. He died of a heart attack in 1997. His first wife Ella had died of leukemia in 1982; he married his second wife, Betty, in 1996. At the time of his death he had seven children and 13 grandchildren.

How the Biden and Trump Campaigns...

Reparation for the Frightful Wound...