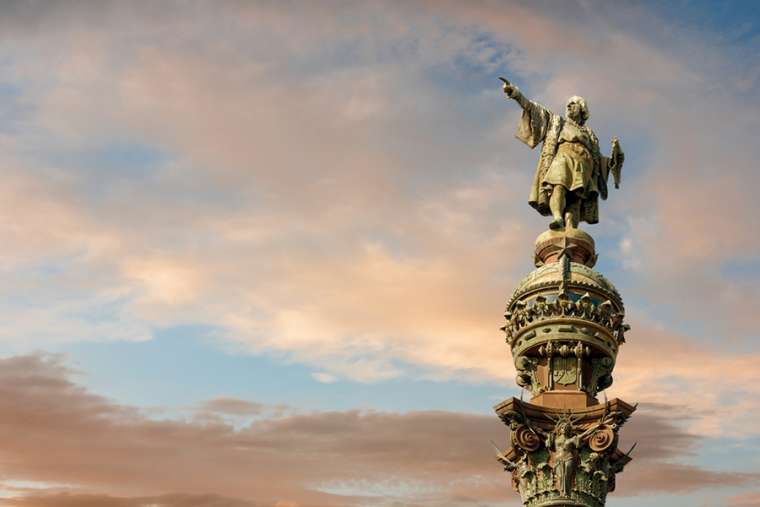 The historical legacy of Christopher Columbus is tarred by bad history in the quest to change Columbus Day, according to a researcher who has focused on Columbus’ religious motives for exploration.

“They’re blaming Columbus for the things he didn’t do. It was mostly the people who came after, the settlers,” Prof. Carol Delaney told CNA in 2017. “I just think he’s been terribly maligned.”

“I think a lot of people don’t know anything much, really about Columbus,” said Delaney, an anthropology professor emerita at Stanford University and the author of the 2011 book “Columbus and the Quest for Jerusalem.”

She said Columbus initially had a favorable impression of many of the Native Americans he met and instructed the men under his command not to abuse them but to trade with them. At one point Columbus hung some of his own men who had committed crimes against the Indians.

“When I read his own writings and the documents of those who knew him, he seemed to be very much on the side of the Indians,” Delaney said, noting that Columbus adopted the son of a Native American leader he had befriended.

Christopher Columbus has been in the news in recent months, as aWisconsin high school named for Columbus faced pressure to change its name,a Massachusetts city faced pressure to remove a statute of the explorer, andstatues of Columber were temporarily removed in July from Chicago parks.

TheEWTN network will air this weeka documentary that aims to respond to critics of the explorer.

Some critics of Columbus note the writings of Bartolome de las Casas, a Spanish Dominican friar born in 1484 who became the first Bishop of Chiapas, Mexico and advocated for indigenous Americans. He wrote strong polemics against Spanish abuses.

Bishop De las Casas depicted the Spaniards as “acting like ravening beasts, killing, terrorizing, afflicting, torturing, and destroying the native peoples, doing all this with the strangest and most varied new methods of cruelty, never seen or heard of before.” De las Casas claimed that the native population of Hispaniola was reduced to 200 people from 3 million.

He said the Spanish killed “such an infinite number of souls” due to lust for gold caused by “their insatiable greed and ambition.” He charged that the Spanish attacked towns and did not spare children, the elderly or pregnant women. He said they stabbed and dismembered them “as if dealing with sheep in the slaughter house” and made bets on how efficiently they could kill.

Delaney, however, emphasized that the acts of other colonists need to be distinguished from those of Columbus.

Bishop De las Casas’ own view on Columbus is more complex, she said. Other scholars have noted that Las Casas admired Columbus and said he and Spain had a providential role in “opening the doors of the Ocean Sea.” The bishop thought Columbus was treated unjustly by the Spanish monarchs after he was accused of mismanagement.

De las Casas himself is not above criticism. He owned indigenous people as slaves before changing his mind on their mistreatment. At one point he suggested to the Pope that black Africans be enslaved as an alternative to enslaving Native Americans.

In 2017, the Knights of Columbus, a Catholic fraternity founded in 1882, which takes its name from the explorer who brought Christianity to the New World, noted that “scholars have long shown that de las Casas was prone to hyperbole and exaggeration, and the bill does not take into account recent scholarship on de las Casas or Columbus.”

“The legacy and accomplishments of Christopher Columbus deserve to be celebrated. He was a man ahead of his time and a fearless explorer and brilliant navigator whose daring discovery changed the course of history,” the group continued. “Columbus has frequently been falsely blamed for the actions of those who came after him and is the victim of horrific slanders concerning his conduct.”

Columbus Day, observed Oct. 11 as a federal holiday, has been a point of controversy among Columbus critics in recent years, and some states and cities have declared the day Indigenous Peoples’ Day.

Columbus Day drew particular controversy in Colorado on the 500th anniversary of Columbus’ arrival in the New World. Organizers of Denver’s 1992 Columbus Day parade canceled it at the last minute due to threats from radical activists with the American Indian Movement.

Columbus has been a major figure for Catholics in America, especially Italian-Americans, who saw his pioneering voyage from Europe as a way of validating their presence in a sometimes hostile majority-Protestant country. The Knights of Columbus, the largest Catholic fraternal organization in the world, took his name, his voyage and his faith as an inspiration.

At one point in the nineteenth century there were even proposals to push for the voyager’s canonization.

In 1892, the quadricennial of Columbus’ first voyage, Leo XIII authored an encyclical that reflected on Columbus’ desire to spread Catholic Christianity. The pope stressed how Columbus’ Catholic faith motivated his voyage and supported him amid his setbacks.

Delaney acknowledged that some Native Americans were sent to Spain as slaves or conscripted into hard labor at the time Columbus had responsibility for the region, but she attributed this mistreatment to his substitutes acting in his absence.

She thinks Columbus Day should be continued, even if the indigenous peoples of America also deserve recognition.

For Delaney, Columbus’ handling of the killings of his crew showed restraint. After his ship the Santa Maria ran aground on his first voyage, he left 39 men on a Caribbean island with firm orders not to go marauding, not to kidnap or rape women, and always trade for food and gold.

“When they returned on the second voyage, they found all of the settlers had been killed,” she said. The priest on that voyage wanted to attack the locals and kill all of their people in revenge, but Columbus strongly refused to make such a move.

She noted the explorer’s relationship with a Native American leader on Hispaniola, a Taino chief named Guacanagari. Columbus had very good relations with him and adopted one of his sons. That son took the name of Columbus’ natural son, Diego, and accompanied Columbus on his final three voyages.

Columbus on his second return voyage took six Indians back to Spain, but not as slaves.

“He took them because they wanted to go,” Delaney said.

New apostolic nuncio arrives in Be...