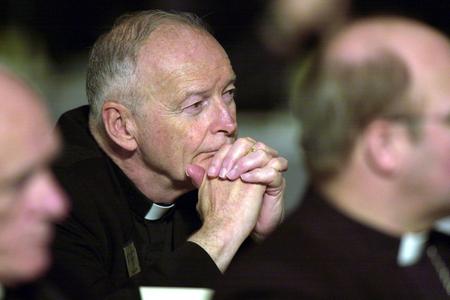 They note that the Vatican report downplays McCarrick’s homosexual misconduct and grooming behaviors with adult clergy and seminarians, and the influence of a clerical ‘gay lobby’ in covering up his moral crimes.

VATICAN CITY — One of the more disturbing and key aspects revealed by the McCarrick Report is how the now-laicized former cardinal archbishop of Washington’s homosexual grooming of seminarians resulted in only light punishments, while at the same time he reached the highest ranks of the Church.

The 450-page report, officially titled “Report on the Holy See’s Institutional Knowledge and Decision-Making Related to Former Cardinal Theodore Edgar McCarrick (1930-2017),” is the fruit of a two-year Vatican Secretariat of State investigation into archival documents and 90 interviews regarding the former cardinal.

It recounts many incidences of McCarrick abusing seminarians and young priests which often included inappropriate touching and sharing beds with them, although McCarrick himself denied any sexual activity took place.

It documents that two bishops witnessed for themselves the inappropriate activity. Bishop James McHugh of Camden and Bishop John Smith of Trenton were present at a dinner in 1990 when McCarrick started physically abusing a young cleric by groping him. Also present was Msgr. Dominic Bottino, a diocesan tribunal judge and hospital chaplain in the diocese of Camden, who was interviewed for the McCarrick investigation.

Bishop McHugh and Bishop Smith, both of whom have now died, saw what was happening, Msgr. Bottino said in the report’s interview. “McHugh then immediately and abruptly stood up, in a sort of panic, and said, ‘We have to leave,’” Msgr. Bottino recalled.

But when asked in 2000 by the apostolic nuncio, Archbishop Gabriel Montalvo, to give factual information of any “serious moral weakness shown by Archbishop McCarrick” to judge if he was suitable to be appointed to Washington, D.C., Bishop McHugh denied witnessing “improper behavior.” Bishop Smith, for his part, advised the nuncio that he did not have “any evidence of serious moral weakness shown by Archbishop McCarrick.”

Dominican Father Boniface Ramsey, who wrote to Archbishop Montalvo in 2000 warning him of rumors he’d heard concerning McCarrick’s inappropriate conduct with seminarians, said he was shocked to learn that two bishops had witnessed McCarrick’s abuse and then were “not entirely frank” about what they had seen.

“This isn’t a question of rumors but something evident to them which they chose not to mention,” he told the Register Nov. 11.

Asked if it was because of a culture that largely turned the other way regarding homosexual behavior, Father Ramsey said, “That’s part of it.”

As a seminary professor in Newark from 1988 to 1996, he said “everybody knew” that McCarrick was “sleeping with seminarians and nobody did anything, it was ‘excused.’” He added that nobody “ever heard of McCarrick touching anyone, it was just considered peculiar behavior on the part of the ordinary; because he never touched anybody, it was reluctantly accepted.”

Despite wide awareness of McCarrick’s behavior with seminarians, which would normally be judged unacceptable even if it was not homosexual grooming, little or no action was taken. The McCarrick Report confirms that only basic restrictions, not to travel and make public appearances, were advised by Pope Benedict XVI in the 2000s, after McCarrick had retired as archbishop of Washington, and that the former pontiff enforced no formal sanctions.

Pope Francis only took canonical action after 2017, when the Archdiocese of New York concluded there was a credible allegation that McCarrick had abused a minor. The Vatican’s executive summary of the report, signed by Andrea Tornielli, the editorial director of the Vatican’s Dicastery for Communication, focuses almost exclusively on that aspect while his homosexual behavior with adults is hardly mentioned. Although the alarm was raised about such abuse, “there were no proven facts,” Tornielli said.

Writing in Catholic World Report Nov. 12, Catholic psychiatrist Richard Fitzgibbons took issue with Tornielli’s view that the abuse was only rumor. “Contrary to the executive summary, significant credible evidence has been presented in this Report from laity, seminarians, priests and members of the hierarchy that Theodore McCarrick engaged regularly and repeatedly in intense grooming behaviors and physical boundary crossing of adolescent males and seminarians,” he wrote.

Fitzgibbons, who was interviewed for the report on the basis he had submitted a testimony to the Vatican in 1996 about McCarrick’s “inappropriate grooming behaviors,” expressed his disappointment that his description of such behaviors by McCarrick “was not in the final report.”

Cardinal Raymond Burke, prefect emeritus of the Apostolic Signatura, told the Register Nov. 12, that as far as he was concerned, canonical action should have been taken long ago.

“Even though there were these strong accusations, persistent rumors about this kind of activity, there was never a proper canonical investigation to get to the truth of the situation,” he said.

“With the greatest respect for Benedict XVI, he asked him [McCarrick] to discipline himself, but if he had information that was significant enough, then there should have been canonical process and a formal act.”

Riccardo Cascioli, editor of the Italian Catholic daily newspaper La Nuova Bussola Quotidiana, noted that, in practice, what the findings of the McCarrick Report show is that “immoral behavior with adults, while certainly not a good thing, is however in the end something that is tolerated.” He added that the “real alarm” that carries penalties is “only if the one abused is a minor.”

“As if the dozens and dozens of future priests who shared a bed with McCarrick, and who were thus for the most part condemned to an unbalanced priestly life, didn’t really count for much,” Cascioli continued. “As if the moral devastation and the destruction of faith caused by a bishop-predator — lost vocations, priests who in turn repeated the abuse, episcopal appointments distorted by pathological ties — were all only a minor problem.”

Cascioli added that “deliberately ignored” in the McCarrick affair was that what permitted his “irresistible rise is a system of power also known as the gay lobby, which favors the appointment and career of bishops with certain characteristics.”

In comments to the Register, a cardinal who spoke on condition of anonymity said “the root of the problem with the McCarrick scandal is homosexuality. A homosexual act with young seminarians is a mortal sin. It’s a crime in the ecclesiastical sense because it’s destroying the faith of these young people and their relationship with God, as well as the credibility of the Church.”

But he argued that the Vatican “doesn’t have in mind the real problem which is that 80% of clerical sexual abuse is perpetrated by homosexuals, that the victims are not usually children but post-pubescent males.” He recalled last year’s three-day Vatican summit on clerical sex abuse, in which it was noticed that the topic of homosexuality was completely absent during the meeting’s opening day, and that the meeting’s leaders tried to avoid the subject, arguing that a subculture of homosexuality in seminaries had “nothing to do with the sex abuse of minors.”

The cardinal pointed out how, despite the McCarrick scandal, Pope Francis approves of same-sex civil unions and has surrounded himself with prelates who are sympathetic to the homosexual agenda. At the end of this month, he will appoint three new cardinals who have publicly indicated their support for the LGBT community, according to a statement applauding their appointment that was released by the pro-LGBT group New Ways Ministry. The cardinal said he was sure that McCarrick’s rise to become one of the Church’s most powerful prelates owed itself to the “homosexual lobby.”

Cardinal Burke maintained that within this clique, “certain people” are pushed up the ranks. “It’s in the agenda’s interest to have people in authority who are soft on the agenda, or are compromised themselves.”

Archbishop Carlo Vigano, whose 2018 testimony on Pope Francis’ and the Vatican’s handling of McCarrick shone a light on the homosexual lobby and its role in McCarrick’s rise, noted that the “same connections, the same complicities, the same acquaintances always recur,” along with “a procession of homosexuals and molesters that is not irrelevant.”

The Pope, he added, “still surrounds himself” with such people who have “gravely compromised reputations,” something which, he believes, is “the most blatant disavowal” of his “supposed moralizing work.”

The McCarrick Report is strongly critical of Archbishop Vigano’s testimony, mentioning him by name 306 times — a factor that has led some critics to believe that the report itself is a means to discredit a key witness and continue to protect McCarrick and those around him. The archbishop rebutted many of the accusations against him on Raymond Arroyo’s World Over program Nov. 12, and said he was not interviewed for the report.

For Phil Lawler, editor of Catholic World News, the question regarding whether McCarrick protected by a homosexual network is one of two key unanswered questions in the report, the other being how he shaped Vatican policy and the U.S. hierarchy.

Lawler told the Register Nov. 11 that he believed the McCarrick Report was prepared “in order to relieve public pressure without answering the questions that were raised by the scandal.”

He added that the “main villain” of the report, apart from McCarrick, “is the whistle-blower, Archbishop Vigano, whose revelations put those questions in the forefront.”

Lawler therefore believes the report is “another indication that the Vatican, under current leadership, has no intention of addressing those questions.”