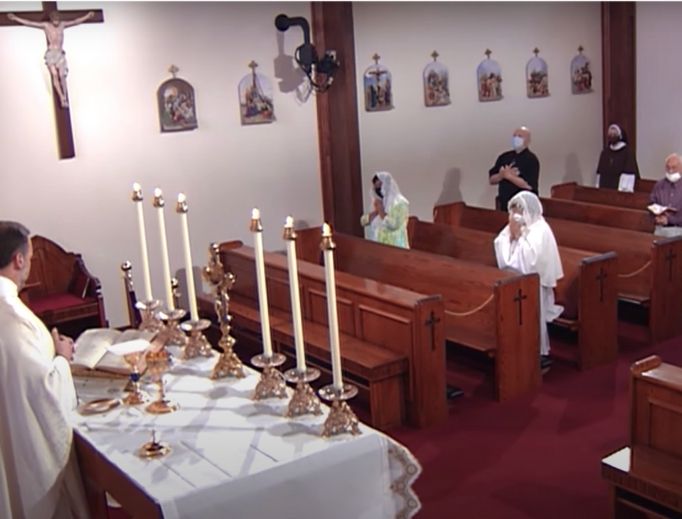 The blessings of celebrating the purpose and promise of the Real Presence made real and present on the altar of sacrifice each day.

The Catholic faithful who attend daily Mass, celebrating and receiving Our Lord in the Eucharist each day of the week, Sunday through Saturday, are taking part in a long-standing practice in the Church in the West. Historically, the practice as a popular and universal form of devotion to the Eucharist reaches as far back as the Middle Ages. And there are indications that it was also a regular custom in the early days of the Church.

Since March, when public worship was suspended due to the COVID-19 pandemic, many of those who cultivated a daily devotion to the Mass have had to patiently wait for better times, when civil restrictions on public gatherings were relaxed.

Now that better times are here in many locales, while there is no indication that attendance at daily Mass has increased among the faithful, those who have made reception of the Eucharist a part of their workaday world have returned to their daily devotion to the Eucharist with greater determination and desire.

For priests and laity alike, daily Mass offers an opportunity to deepen their faith in Christ, to find continuity in celebration of the Eucharist, and to come to a greater understanding of the purpose and promise of the Real Presence made real and present on the altar of sacrifice.

According to English liturgistFather Adrian Fortescue, in his entry on the Mass inThe Catholic Encyclopedia, historically, the celebration of daily Mass may have arisen when the practice of priests concelebrating Mass with their bishop “was in the early Middle Ages replaced by separate private celebrations. No doubt the custom of offering each Mass for a special intention helped to bring about this change.”

“The custom of the intention of the Mass,” Father Fortescue also notes, “further led to Mass being said every day by each priest.”

When these private celebrations became public is not clear, but as Father W. Gordon notes in his 1934 book,The Liturgy and Its Meaning,daily public celebration of Mass in England was a regular custom by the Middle Ages.

“As everybody knows, the land was covered with chantries where Mass was said or sung every day,” he writes. “These were often attached to parish churches, the monastic and collegiate institutions and cathedrals.”

“Sometimes chantries were established in places where no other church was to be found near at hand,” Father Gordon adds. “That they supplied a popular demand is clear, since they were so very numerous.”

But even further back in Church history, during the age of the Church Fathers (second-ninth century), Father Gordon notes, “it was not unusual for all the clergy to celebrate daily.”

Nonetheless, among the faithful, as Catholic liturgical historianJosef Jungmannnotes in his 1951 bookThe Mass of the Roman Rite: Its Origins and Development, “In the early Church the only ones who attended weekday Mass were as a rule those for whose benefit the sacrifice was being offered. The celebration of Mass on the stational days [days set aside for fasting in honor of particular saints, which often concluded with Mass at a ‘stational’ church] must, no doubt, have gathered a larger crowd of the faithful.”

“In North Africa where daily celebration was customary earliest of all,” Jungmann adds, “Augustine gives us to understand that this was very necessary for the faithful in days of peril, that they might be able to continue steadfast. However, this is no evidence of a daily Mass attendance by a wider circle.”

Offering credence to Jungmann’s claim about the popularity of daily Mass in North Africa, he points to St. Augustine, bishop of the Diocese of Hippo in North Africa, who, in hisConfessions,notes that his mother, St. Monica, “let no day pass without attending the sacrifice at Your altar … .”

Like St. Monica, Anne Redlinger, a member of St. Therese of the Child Jesus parish in San Diego, California, has found in daily Mass solace and hope for her son, who she lost to suicide in 2014.

According to Redlinger, her devotion to daily Mass began soon after her parish established a 24-hour Eucharistic adoration chapel in 2000.

“From there my love for the Eucharist — and the Mass — grew,” she said. “It was a direct intervention from God, spending time with the Lord in adoration because of the blessings we noticed in our family and in our lives.”

But after her son took his own life — according to Redlinger, he suffered from anxiety and depression — daily Mass “was really my lifeline that kept me going and gave me hope that I would one day be reunited with him.”

Besides deepening Redlinger’s faith in the Eucharist and God’s mercy, daily Mass also helped her better understand the meaning and purpose of the Eucharist.

“It changed my faith in the way that I lived my life,” she said. “This is a whole process that I’m still going through. But I had a lot of anxiety and too much worry about worldly things and not enough of the spiritual, what matters in life. Going to Mass every day helps me see that being present at the altar with God has helped me to understand my priorities better. After that follows peace that the world cannot offer.”

In response to her deepening faith in the Eucharist, Redlinger started with her husband, Kurt, a ministry,Got Mary?, which offers Marian-themed t-shirts and other apparel as well as resources to learn more about Catholic teaching on Mary. The Redlingers travel the country with their ministry, often attending Eucharistic congresses and other Eucharistic-themed gatherings.

“If the Lord wills it, I would love to have a Eucharistic congress take place in San Diego,” Redlinger told the Register.

Like the Redlingers, Msgr. Kevin Holmes, pastor of the cathedral parish in Madison, Wisconsin, which includes Holy Redeemer Church and St. Patrick’s Church, sees in daily Mass an entrée into a deeper love for the Eucharist. (The cathedral of the Diocese of Madison, St. Raphael’s, was destroyed by an arsonist in 2005 and has yet to be rebuilt.)

While Msgr. Holmes acknowledges that daily Mass “is not part of the spirituality of all the faithful, we definitely have people who ground their spiritual life in daily Mass. There’s no better way to remain close to the Lord than in the daily Eucharist.”

While it may not be a surprise to hear that priests would cultivate such a devotion, according to Church law, daily Mass is no more obligatory for priests than it is for the laity.

Speaking with the Register by email from England, Father Michael Lang, editor ofAntiphon: A Journal for Liturgical Renewal, noted that the priest is only required to celebrate Mass on Sundays and other holy days.

“The daily celebration of Mass has never been obligatory, unlike the Divine Office,” he told the Register, “but it is strongly desired by the Church and very important for priestly spirituality.”

This encouragement is succinctly stated in canon law, Father Lang noted, citingCanon 904: “Remembering always that in the mystery of the Eucharistic sacrifice, the work of redemption is exercised continually, priests are to celebrate frequently; indeed, daily celebration is recommended earnestly since, even if the faithful cannot be present, it is the act of Christ and the Church in which priests fulfill their principal function.”

In the same spirit, Msgr. Holmes wholeheartedly encourages his flock to attend daily Mass and find in it an opportunity to grow in faith and holiness.

“I often tell people, especially first communicants, that when we are growing in childhood and youth, from one day to the next, we don’t look all that much different,” he said. “But if you look back after a year or two years, tremendous change and growth has happened. Likewise, with daily Mass, you don’t see a great difference after having come to Mass on one Tuesday, but if we are attending Mass and receiving Holy Communion, rightly disposed, week after week, or especially day after day, that is going to transform us to be more like the Lord as the process unfolds and time goes on.”

Taking to heart the importance of daily Mass as part of his parish’s faith life, Msgr. Holmes has reworked the daily Mass schedule at his parish after COVID-19 restrictions became more relaxed in Wisconsin. The cathedral parish offers 11 opportunities for daily Mass at its two churches: 12:10pm daily Mass in English, Monday through Friday, and Saturday at 8am, at St. Patrick’s; 7pm daily Mass in Spanish, Tuesday through Friday (which replaced the same number of 5:15pm Masses in English, which Msgr. Holmes said were ill-attended because they took place during the city’s rush hour), and a 7pm Mass in Latin, all at Holy Redeemer.

“The truth is we are just going back to the number of Masses that we had before COVID hit,” Msgr. Holmes told the Register. “But when COVID hit, we had no schedule at all for a while. Then we started having the midday Mass in English, when only very few people could attend; and at the same time my parochial vicar from Mexico started saying Mass almost every evening in Spanish.”

After restrictions were lifted, daily Mass attendance at the cathedral parish has been returning to pre-COVID numbers, Msgr. Holmes said, with about 30 people attending the midday Mass. But the big surprise has been attendance at the newly added Spanish evening Mass, drawing between 40 and 50 people.

“At first, due to the COVID-19 restrictions, we could only have nine people in church,” he said, and now “there are still people who are not working downtown, but remotely from home, so that cuts into the attendance a bit for our midday Mass. But I would say the attendance is good at the English midday Mass and very enthusiastic; and the attendance in the evening Spanish Mass is even greater.”

Like many faithful around the country before COVID-19, Redlinger was forced to fast from the Eucharist, not only on Sundays, but also during the week.

“During the pandemic, when we were deprived of it, we realized we were being starved,” she said, adding that, with the relaxation of restrictions in California, she has been more determined than ever to return to the habit of attending daily Mass.

But challenges remain since some COVID-19 restrictions are still in place in California. The time and location of daily Mass in her area “changes weekly,” Redlinger said, explaining that in order to continue receiving the Eucharist every day she has had to visit as many as four different churches in San Diego during any given week.

“We’ve been wandering around like the Israelites in the desert,” she told the Register.

“We’re going to the churches open and available,” she added, noting that many area parishes offer Mass outside so that more faithful may attend.

“Now that it’s outside, it’s beautiful, surrounded by God’s creation,” she said. “Every morning, it is like a mini retreat for me to crown myself with what matters and keep in mind that we’re in very perilous times right now, which gives me that inner peace.”