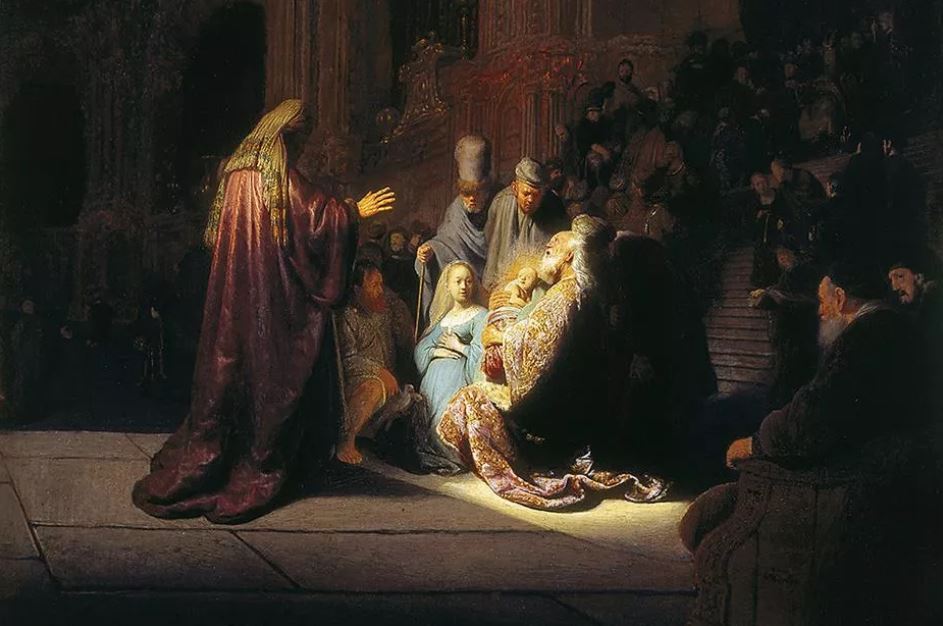 The purpose of the devotion of the Seven Sorrows of Our Lady is to promote union with the sufferings of Christ.

In the Middle Ages, Catholic theology concentrated mostly on Christ’s passion. At the side of the Man of Sorrows, however, was the Sorrowful Mother, sharing his suffering.

John 19:25 says, “Near the Cross of Jesus stood his mother, his mother’s sister, Mary, the wife of Cleopas and Mary Magdalene.” Devotion to the Crucified Christ and to Our Lady of Sorrows grew side by side. On Sept. 15, the day following the ancient feast of the Holy Cross, the Church celebrates the feast of Our Lady of Sorrows.

The Seven Sorrows of Our Lady are taken from scriptural events. The devotion has a long history, although it was not officially promulgated by the Church until the early 19th century. Before Pope Pius VII’s formal approval, the Servite Order had permission in 1668 to celebrate the feast of the Seven Sorrows because the order was instrumental in popularizing the Seven Sorrows devotion.

The seven sorrows are:

The prophecy of Simeon (Luke 2:34, 35)
The flight into Egypt (Matthew 2:13-14)
The loss of the Child Jesus in the Temple (Luke 3:43-45)
The meeting of Jesus and Mary on the Way of the Cross
The Crucifixion
The taking down of the Body of Jesus from the Cross
The Burial of Jesus

Because of these Seven Sorrows that pierced her maternal heart, the Mother of God is often represented either as standing beneath the Cross, or as holding the lifeless body of Jesus on her lap, her heart transfixed by seven swords, as foretold in the prophecy of holy Simeon at the Presentation: “And thy own soul a sword shall pierce” (Luke 2:35).

Devotion to Our Lady of Sorrows consists essentially of recalling and meditating on each of the seven sorrows and saying theHail Maryprayer seven times, one after each Sorrow recalled and meditated upon.

A pious tradition holds that the Blessed Virgin Mary grants seven graces to the souls who honor her daily by meditating on her sorrows and saying seven Hail Marys, one for each Sorrow. The devotion was passed on by St. Bridget.

The seven graces are:

I will grant peace to their families.
They will be enlightened about the divine mysteries.
I will console them in their pains and I will accompany them in their work.
I will give them as much as they ask for as long as it does not oppose the adorable will of my divine Son or the sanctification of their souls.
I will defend them in their spiritual battles with the infernal enemy and I will protect them at every instant of their lives.
I will visibly help them at the moment of their death. They will see the face of their mother.
I have obtained from my divine Son, that those who propagate this devotion to my tears and sorrows, will be taken directly from this earthly life to eternal happiness since all their sins will be forgiven and my Son and I will be their eternal consolation and joy.

The Mother of God once said to St. Bridget, “I gaze upon the children of men to see whether anyone feels compassion for me, and alas, I see but few! If many forget me, at least you, my daughter, do not forget me. Consider how much I have suffered.”

The Church calls Mary theQueen of Martyrsbecause her martyrdom surpassed that of all others. Although her body was not bruised by torturers, her heart was pierced by the sword of compassion for her Divine Son — a sorrow sufficiently great to inflict a thousandfold death. St. Bernardine of Siena says the sorrow of Mary was so great that if it had been equally divided among all men, they would have died immediately. As great as was her love for Jesus — and it was unspeakably great — so great also was the sorrow of Mary at his Passion. Hence we can say with truth that Mary suffered more than if she had been martyred a thousand times, for she loved Jesus more than her own life and would have sacrificed her life a thousand times with the greatest joy if, without offending God, she could have rescued her Son from sufferings and death. St. Basil says: “As the sun surpasses all the stars in luster,so the sorrows of Mary surpass all the tortures of the martyrs”.

Mary was an eyewitness of the sufferings of her Divine Son. She saw him bound to the pillar. She heard the lashing of the scourges. She saw His delicate virginal flesh writhe and quiver under the lacerating blows. She was present at theEcce Homoscene, on the way to Calvary, and at the Crucifixion. And her anguish was further increased by the fact that she could offer no relief to her dear Son in his excruciating pains. As she stood beneath the Cross, she saw the blood trickling from his thorn-crowned head into his eyes, but could not reach his sacred face to wipe the drops away! She saw his lips parched with thirst, pale and bloodless, but was unable to give him a refreshing drink. His head had no pillow to rest upon, yet she was prevented from supporting it or letting it repose upon her bosom. Who can comprehend the anguish endured by her motherly heart during thosethree endless hours of dreadful helplessness?

Another source of Mary’s unutterable grief wasman’s ingratitudefor Our Lord’s Passion, and the eternal perdition of so many souls for whom her Son’s Precious Blood would be shed in vain. She, the Queen of the Apostles, the Mother of the Church, saw passing before her eyes a vision of the heedlessness of mankind for sins forgiven, the relapses into mortal sin, the cold indifference, the disgust for divine things, the desecration of the holy sacraments, the rejection and abuse of grace on the part of so many souls — all consequences of the basest ingratitude.

For 15 years after the death of her beloved Son, until her own happy departure, the Passion of Our Lord was renewed over and over again in the heart of the Blessed Virgin. Mary of Agreda said it was revealed to her that after the Ascension of her Son, Mary suffered inexpressibly every Friday, as do certain privileged souls who are favoured with the stigmata. All these sufferings Mary endured for love of us.

Devotion to the sorrows of Mary is a source of great graces because it is so pleasing to our Divine Lord. Many holy writers say that through her sufferings Mary placed an obligation, as it were, upon her Son, which constrains him to grant her whatever she asks of him. As soon as we sympathize with the sorrows of his Mother, we draw our Savior to our­selves. “He is,” says St. Bernard, “at the disposal of those who devoutly meditate on the sufferings of His Mother.” Our Lord said to Blessed Veronica of Binasco: “My daughter, the tears which you shed in com­passion for my sufferings are pleasing to me, but bear in mind that on account of my excessive love for my Mother, the tears you shed in compassion for her sufferings arestill more precious.”

There are, indeed, few devotions for which our Savior has made greater promises than for this one, and there are, few that are more pleasing to him.