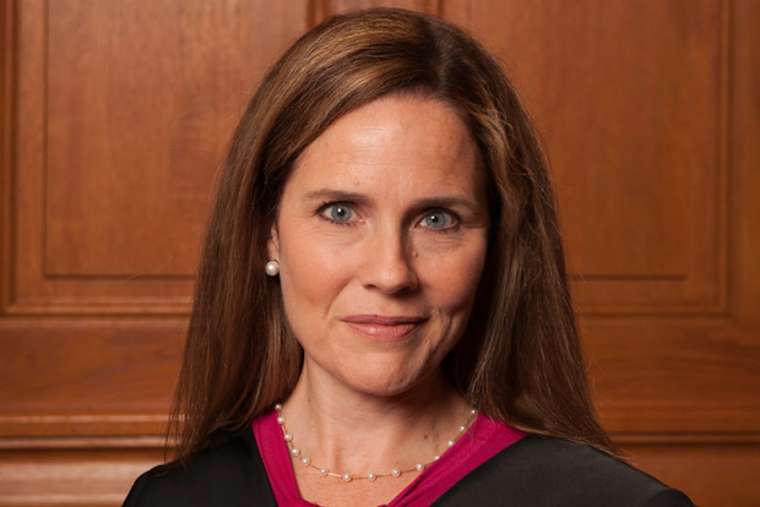 Barrett was appointed a judge on the 7th Circuit Court of Appeals in 2017. In her confirmation hearing, the judge faced hostile questions about her Catholic faith, prompting outrage and frustration among some Catholic leaders.

The nominee appeared before the Senate Judiciary Committee Sept. 6, 2017.

Questions from some Democratic senators focused on how Barrett’s Catholic faith might influence her decisions in cases involving abortion and same-sex marriage.

Sen. Dianne Feinstein (D-Calif.), ranking member of the committee, told Barrett directly that her Catholic beliefs were concerning, as they might influence her judicial decisions on abortion.

“Why is it that so many of us on this side have this very uncomfortable feeling that dogma and law are two different things, and I think whatever a religion is, it has its own dogma. The law is totally different,” Feinstein said.

“And I think in your case, professor, when you read your speeches, the conclusion one draws is that the dogma lives loudly within you. And that’s of concern.”

Before making that point, Feinstein praised Barrett personally, saying the nominee was “amazing to have seven children and do what you do.”

The senator pivoted quickly, however, to characterizing Barrett as a “controversial” nominee, “because you have a long history of believing that your religious beliefs should prevail” over the law.

Barrett insisted that as a judge, she would honor binding precedents, and would not let her religious beliefs inappropriately alter her judicial decisions.

In the same hearing, Sen. Dick Durbin (D-Ill.) grilled Barrett over her use of the term “orthodox Catholic” in an article she had co-authored as a law student. Durbin took umbrage with the term, and suggested that Barrett did not think persons who dissent from Church teaching on marriage to be truly Catholic.

Barrett pointed to a footnote in the article that admitted it was “an imperfect term,” and that the article was talking about the hypothetical case of “a judge who accepted the Church’s teaching” on the death penalty and had a “conscientious objection” to execution.

“Do you consider yourself an orthodox Catholic?” Durbin asked Barrett, who replied that “I am a faithful Catholic,” adding that “my personal Church affiliation or my religious belief would not bear in the discharge of my duties as a judge.”

Durbin, who was in 2004 prohibited from receiving Holy Communion because of his stance on abortion, next said that “there are many people who might characterize themselves ‘orthodox Catholics,’ who now question whether Pope Francis is an ‘orthodox Catholic.’ I happen to think he’s a pretty good Catholic.”

“I agree with you,” Barrett replied, to which Durbin responded, “Good. Then that’s good common ground for us to start with.”

He also asked Barrett how she would rule on a case involving a “same-sex marriage,” given the late Supreme Court Justice Antonin Scalia’s dissent from the 2013Obergefelldecision that legalized same-sex marriage.

“From beginning to end, in every case, my obligation as a judge would be to apply the rule of law, and the case that you mentioned would be applyingObergefell, and I would have no problem adhering to it,” she said.

After the hearing, Barrett’s nomination was confirmed, and the former Notre Dame law professor took up her position as a judge.

But Catholic leaders said the questions she faced were disturbing.

“This smacks of the worst sort of anti-Catholic bigotry,” Dr. Chad Pecknold, a theology professor at The Catholic University of America, told CNA in 2017.

Pecknold called the hearing “a religious inquisition rather than an adjudication of legal competence for the bench.”

“I submit that the real dogmatists in the room are the ones mounting an inquisition against one of the nation’s great legal scholars,” he added.

Other Catholic leaders also decried the questions about Barrett’s faith.

“Such bigotry has no place in our politics and reeks of an unconstitutional religious test for qualification to participate in the judiciary. What these Senators did today was truly reprehensible,” said Brian Burch, president of CatholicVote.org.

After the hearing, the phrase “The dogma lives loudly” became something of a catchphrase among Catholic supporters of Barrett, and appeared as a hashtag, on coffee mugs and on t-shirts. The hashtag is begun to have a resurgence as speculation that Trump might appoint Barrett to the Supreme Court has intensified.

The president is expected to nominate a justice to the court within a week. Also on his shortlist are several federal judges, and three U.S. Senators.