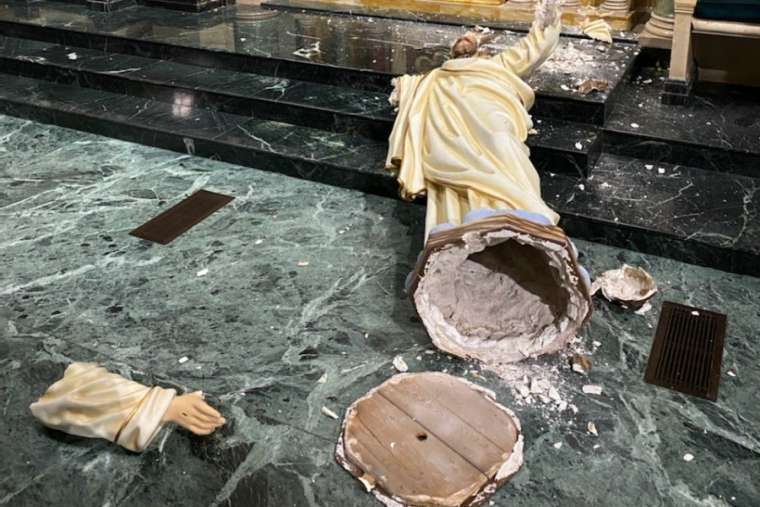 A vandal destroyed a statue of Jesusat St. Patrick Cathedral in El Paso, Texas on Tuesday, the latest in an ongoing series of attacks on churches across the United States.

According to the diocese, someone entered the sanctuary of St. Patrick’s Cathedral Tuesday morning and destroyed a nearly 90-year-old statue of the Sacred Heart of Jesus. The statue had been placed behind the main altar of the church, which was open for prayer at the time of the vandalism.

According to the diocese, the statue is an “irreplaceable loss” and cannot be repaired.

“This statue is one of my favorite representations of Jesus—his arms open wide in welcome, his heart aflame with love for us. I would often take inspiration from this image as I prepared for Mass,” said Bishop Mark Seitz of El Paso in a statement by the diocese. Seitz added that he was glad, however, that nobody was hurt by the vandal.

According to the diocese, a suspect has been detained and an investigation by the city’s police is ongoing. Seitz urged people to pray for the vandal, as “he certainly must be a person who is greatly disturbed to have attacked this peaceful place in our city and this image of the King of Peace.”

“I hope this might be the impetus for him to receive the help he needs. He will be in my prayers,” he said.

“In this moment we will reach out in confidence to the One this statue represented and I know he will console us,” said the bishop.

The attack in El Paso is the latest inmonthsof vandalism and arson attacks on churches.

Earlier this week, a parish in Midvale, Utah, saw back to back attacks. St. Therese of the Child Jesus Catholic Church had its namesake statue beheaded followed by burglary on subsequent nights.

“Sometime last night our statue of St. Therese of the Child Jesus outside of the Main Church was broken and vandalized. We are currently in contact with the police,” the parish wrote on its Facebook page on Monday, September 14. The statue was pushed off its pedestal and the head was broken off. A planter by the statue was also smashed.

The parish urged people to “pray for the person who did this, that they may get the help they need,” and said the vandalism was an “unfortunate situation.”

On Tuesday, the parish once again reported vandalism.

“As an update to our parishioners, we are upset to report that one of the houses on our parish property was vandalized and broken into last night,” said the parish in a Tuesday post to its Facebook page.

“We have contacted the police and they are forming an investigation. We are planning on taking new measures to keep our parish safe. St. Therese, pray for us!”

Every Catholic Needs to Know About...