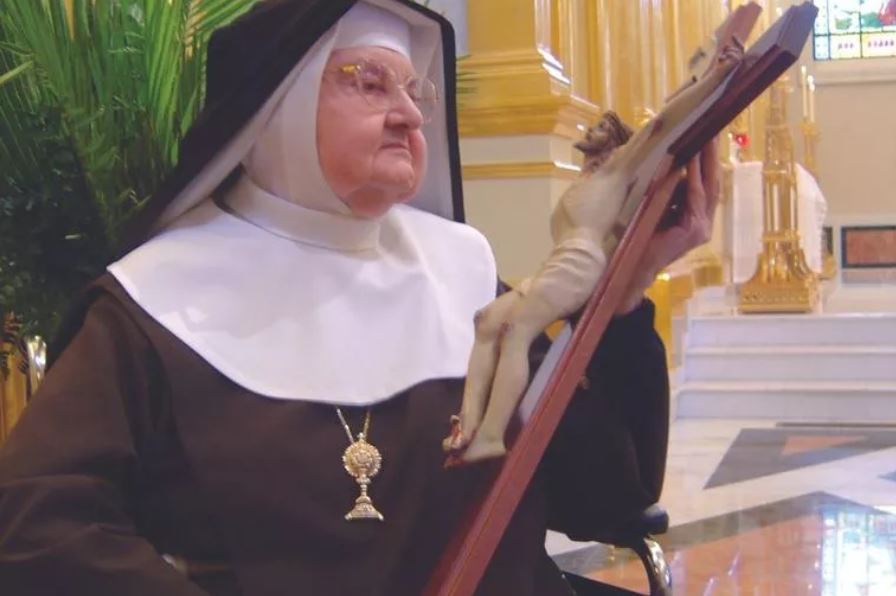 Throughout Its History, EWTN Has Embraced Mother Angelica’s Charism

A prayer. A vision. And sheer faith.

This is what helped Mother Angelica launch EWTN in a garage the nuns transformed into a broadcasting studio on Aug. 15, 1981.

At the beginning, the first Roman Catholic satellite cable network broadcasted only four hours a day to 60,000 homes. Yet in the next four decades, EWTN has expanded to become the largest religious media network in the world, reaching internationally with every means of communication to bring the light of Christ worldwide.

The numbers for today’s EWTN are grand — 11 global TV channels are broadcast in multiple languages 24 hours a day, seven days a week, to more than 350 million television households in more than 145 countries and territories. Along the way came radio stations, worldwide shortwave broadcasts and numerous websites.

EWTN Global Catholic Network’s chairman of the board and chief executive officer, Michael P. Warsaw, attributes all of this growth to one nun’s faith and prayerful persistence.

“Even though she is not with us for this 40th anniversary celebration, the charism of EWTN remains unchanged,” he said.

Mother’s dependence upon God’s providence proves itself in what EWTN has meant for the network’s vast number of viewers. Warsaw gave one recent example related to EWTN’s media presence during the COVID-19 pandemic.

“When churches were closed nearly everywhere in the world and people were locked in their homes because of government restrictions, EWTN was there,” he told the Register. “We heard from so many people that EWTN was a lifeline for them during this time. It provided them with hope, calmed their fears, kept them informed and enabled them to deepen their faith in a dark time.”

“The countless messages we have received from people are a beautiful witness to the impact that EWTN continues to have in people’s lives.”

EWTN in the last 10 years increased its reach through growth in news services, internet, radio and, of course, television. According to Warsaw, “There is almost no part of the EWTN apostolate which has not seen huge growth and continued development over these past 10 years.”

“We have seen the development of a number of regional television channels over this time, including in Ukraine, Poland, Hungary, Romania, Croatia, the Nordic countries, the Low Countries, Spain and elsewhere,” he said. “These channels in local languages have opened up EWTN’s apostolate to entirely new audiences.”

Warsaw called that growth exponential, and the statistics tell that story.

“We served 217 million television homes in 2011, our 30th anniversary. We added over 150 million additional television homes to our reach between then and early 2021,” Chris Wegemer, vice president of marketing, told the Register of this nearly 70% increase.

Among the countries “where the Holy Spirit has opened new doors” in the 10 years, Wegemer pointed out the growth in Europe. He said both of the Asian additions are also all the more remarkable because they have a relatively small percentage of Catholics in their populations.

In the last decade, EWTN launched its TV service in Germany and opened studios in Washington, D.C.; in Garden Grove, California, on the campus of Christ Cathedral, formerly the Crystal Cathedral; in Rome; and in the United Kingdom, near the Shrine of Our Lady of Walsingham.

For television, this growth led to more coverage opportunities and new audiences.

Peter Gagnon, EWTN’s vice president of programming and production, told the Register the biggest changes from a production and programming standpoint would be the addition of EWTN News Nightly in 2013 and other programs out of the Washington bureau, where EWTN News journalists became accredited correspondents at the White House and on Capitol Hill. He also highlighted the increased global reach.

Gagnon explained, “The international growth gave us the ability to produce new content, special events and present the faith from around the world.” The network has carried coverage of papal events throughout EWTN’s history, but the increased presence of personnel in Rome and other places in Europe increased the capacity for comprehensive coverage of major events.

He cited as an example coverage during the papal interregnum after Pope Benedict XVI’s resignation and the election of Pope Francis: “We were able to produce multiple programs in English, Spanish and German on a daily basis for almost a full month during that time,” said Gagnon.

In addition, EWTN has established ongoing relationships with major shrines throughout the world. Currently EWTN partners with Lourdes, Fatima, San Giovanni Rotondo and Knock, which, Gagnon said, “allows us to air events from these shrines on a regular basis. This presents the universal nature of the Church to our audience.”

Further, Gagnon pointed out that the last decade has seen the launch of several new shows, including Scripture and Tradition with Jesuit Father Mitch Pacwa and Father Spitzer’s Universe, with Jesuit Father Robert Spitzer. The number of new series, miniseries, specials and ongoing series — not the number of episodes — totals 227.

He added, “I honestly am amazed every day when I come to work as to all we are able to accomplish every day with limited resources,” he said. “It has to be divine intervention … and Mother Angelica’s prayers!”

In the last decade EWTN has been able to expand both its reach and the type of content it offers, especially the addition of the news division. Said Warsaw, “There is no other entity that is doing as much to bring Catholic news content to every part of the globe than EWTN News is doing today.”

Since the 94-year-old National Catholic Register became part of the EWTN family 10 years ago, it has more than doubled its print subscribers. It also was the seedbed for the creation of EWTN News, Inc., which includes the TV news programming out of the Washington and Vatican bureaus as well as several websites and digital platforms dedicated to Catholic journalism.

“It was Mother Angelica herself, who, many years ago, insisted that the words ‘news service’ should be placed on our letterhead alongside the words ‘television,’ ‘radio’ and ‘internet,’ to describe the core services EWTN provides,” said Warsaw, the Register’s publisher, in 2011. He called it “another step forward in executing that vision of Mother Angelica.”

Further steps forward in the news division continued at high speed. In 2014 Denver-based Catholic News Agency and its sister organization ACI Prensa, the world’s largest Spanish-language Catholic news organization, headquartered in Lima, Peru, were added under the EWTN News banner. These two digital news services, together with the ACI Group, have journalists based in the United States, Europe, Africa, Asia and South America.

“EWTN already had a global reach with its TV programming, but the acquisition of CNA and ACI Prensa provided the network with ‘boots on the ground,’” Shannon Mullen, editor in chief of Catholic News Agency, told the Register. “At the time, Alejandro Bermudez, the longtime head of CNA/ACI Prensa, rightly called the move a ‘match made in heaven.’”

The results have proven nothing short of phenomenal. Ursula Murua, director of digital strategy and social media for EWTN News, pointed out that since becoming a part of EWTN News in 2014, CNA has tripled its web audience, reaching more than 60 million website users.

“ACI Prensa was already the most-visited Catholic website in Spanish before the merger but since 2014 also tripled its web audience and has reached almost 300 million website users,” she added.

The ACI Group includes ACI Digital in Portuguese based in Brazil, launched in 2014; ACI Stampa, its Rome-based Italian-language Catholic news agency; and CNA Deutsch, the German edition based in Munich, both launched in 2015. ACI Africa, based in Kenya, was added in 2019.

This past decade has also seen a tremendous increase in traffic on the EWTN website, EWTN.com. Jeff Hahn, director of online services, shared several significant figures showing the sharp rise in online viewers.

“Back in 2011 we had 48 million pageviews,” he told the Register. “As it stands now, in the year to date, we have had 53 million.” In just the first seven months of 2021, pageviews have already surpassed the total number of views for the entire year a decade ago>

The comparison is no less surprising when comparing visits from mobile devices.

Hahn said that, in 2011, EWTN had 1.4 million visits from mobile devices, while this “year to date we have 6.5 million visits.” That makes for more than a 4.5% increase in only seven months of this 40th anniversary year.

Among the additions of new offerings of old media forms, EWTN, together with Sophia Institute Press in New Hampshire, created a book-publishing group — EWTN Publishing Inc. — to offer print and electronic form books to a worldwide audience. Heading the list of nearly 60 titles released are many of Mother Angelica’s works. Other authors include EWTN regulars well-known by television audiences, such as Father Mitch Pacwa and Dr. Ray Guarendi.

Another older mass medium — radio — continues its solid place in the EWTN media family, as programming is broadcast by 500 domestic and international AM and FM radio affiliates and heard over SIRIUS/XM, iHeart Radio Satellite Radio Channel and different apps.

In 2012 EWTN became the first Catholic broadcaster to be added to iHeart Radio.

Reflecting on all the changes in the last decade, Doug Keck, EWTN’s president and chief operating officer, said the network’s growth is even more impressive considering “we had to deal with the passing of not only our founder, Mother Angelica, but the loss of her ‘right arm,’ Deacon Bill Steltemeier,” EWTN’s founding president.

Nevertheless, he told the Register, “During this period we truly became the global Catholic network, broadcasting not just to the globe, but from around the globe.”

Keck added that what strikes him even more today than ever before “is how Mother’s message in whatever language we translate it into is as important and timely today as it was when she first spoke those words on her television show.”

“As we look ahead to the next decade and beyond, my hope is that we can continue to reach more and more people and continue to bring more people into a deeper relationship with Our Lord,” the network’s chairman and CEO explained, adding that “there is much more work to be done.”

“I look forward to the opportunity to look back in another 10 years and see what God has done with and through EWTN. I’m certain that I’ll also be able to use one of Mother Angelica’s favorite phrases, ‘Awesome!’”

Building Your Domestic Church: How...