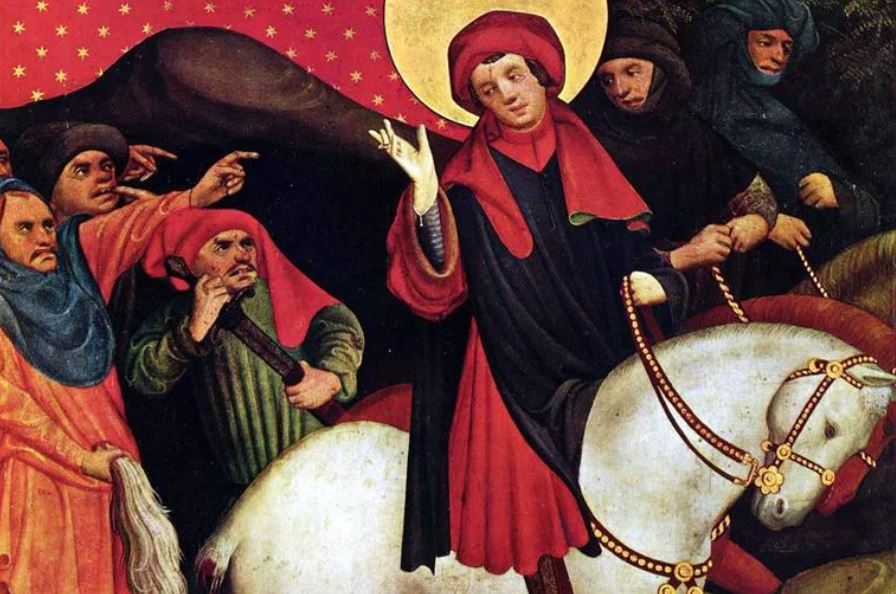 Defending the interests of the Church, Thomas knew, would ultimately bring him in conflict with King Henry II.

Thomas Becket was born in England in 1118. At 24, he obtained a post in the household of Theobald, Archbishop of Canterbury. The archbishop was fond of Thomas, and made him Archdeacon of Canterbury, a position of great prominence.

An early biography described Thomas as “slim of growth and pale of hue, with dark hair, a long nose and a straightly-featured face. Blithe of countenance was he, winning and loveable in his conversation, frank of speech but slightly stuttering in his talk, so keen of discernment and understanding that he could always make difficult questions plain after a wise manner.”

Thomas helped Henry II secure the throne of England and in 1155; the grateful king made Thomas his chancellor. Thomas became a close friend and confidant of Henry.

As chancellor, Thomas was known for his lavish lifestyle (although he had a great generosity towards the poor); during one official state visit to France he brought with him a personal retinue of 200 men, leading the French to gasp, “If this is the chancellor’s state, what can the king’s be like?” He also distinguished himself as a capable general and formidable warrior.

When Archbishop Theobald died in 1161, King Henry appointed Thomas to succeed him. Thomas refused, warning Henry, “Should God permit me to be Archbishop of Canterbury I should soon lose your majesty’s favor, and the affection with which you honor me would be changed into hatred.” Defending the interests of the Church, Thomas knew, would ultimately bring him in conflict with an aggressive head of state, which Henry was. The king dismissed his protests, and Thomas became archbishop in 1162.

As archbishop, a marked change came over Thomas. Contrary to the wishes of the king, he resigned his chancellorship, and with it abandoned his extravagant habits, donned a penitential hair shirt, sought the help of holy monks to root out the vices of his earlier life and became diligent in his duties for the Church.

As time passed, Thomas’ warning to Henry proved correct. The relationship between the king and the archbishop steadily deteriorated, the most serious dispute arising over the trial and punishment of criminal clergy. And not only would Thomas spar with Henry II, but also with his fellow bishops of England, who compromised with the Crown. In one such battle in 1164, a frustrated Thomas exclaimed, “You, my fellow bishops, who have served man rather than God, I summon to the presence of the pope!”

Thomas spent much of his episcopate in exile in France, as Pope Alexander III and the king of France sought to bring about his reconciliation with Henry and his brother bishops of England. In 1170, he finally returned to England, enthusiastically greeted by the common people. Thomas knew martyrdom awaited him. Home at Canterbury, Thomas again sent the king into a rage, this time over the disciplining of his fellow bishops. Four knights interpreted the king’s anger as a suggestion to kill Thomas, and set off for the archbishop’s cathedral.

Despite ample warning, Thomas refused to flee, and the knights confronted him during vespers at the cathedral on Dec. 29, 1170. One tried to force him outside, but Thomas threw him to the ground. They struck out with their swords, as Thomas cried, “O Lord, I commend my spirit!” and “For the name of Jesus and in defense of the Church I am willing to die.” They killed him and scattered his brains on the cathedral floor.

Upon hearing, the king was stricken with grief and went into isolation, fasting for 40 days. In 1174, 18 months after Thomas’ solemn canonization by Pope Alexander as a martyr, Henry II, the most powerful monarch in Europe, accepted a scourging at St. Thomas’ shrine to satisfy the public’s demand for justice.

Today, Thomas Becket is among the best known medieval saints, and is venerated as protector of the secular clergy in England. He is remembered in the liturgy on Dec. 29.