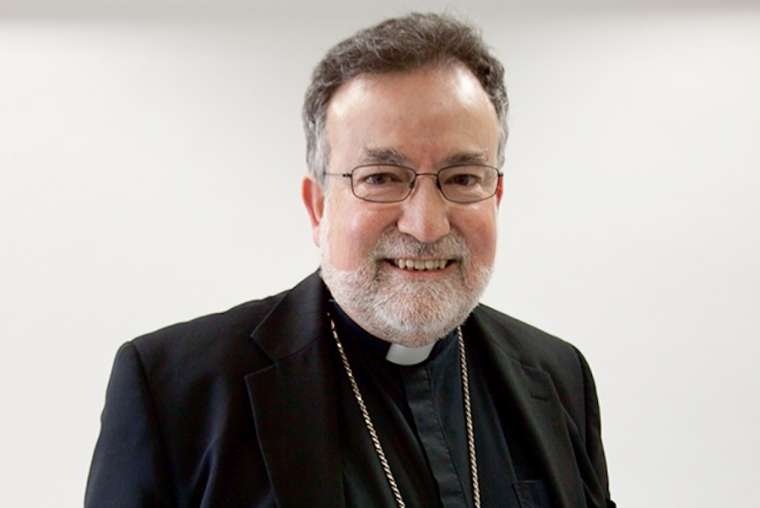 A Sacramento priest excommunicated last week says he stands by his claim that Pope emeritus Benedict XVI is the true pope. In addition to charges of schism, the priest is suspected of misconduct and improper relationships with at least two adult women; he confessed his love to one of them in a video message circulating online.

“I continue to regard Benedict as retaining the Office of Peter, as mysterious as that might be. Therefore, I do not regard Bergoglio as the Supreme Pontiff of the Roman Catholic Church,” Fr. Jeremy Leatherby wrote this weekin an open letter to the Sacramento diocese.

Leatherby added that although he was already prohibited from public ministry, he had been celebrating Masses in recent months in private homes, offered “in union with Pope Benedict, not with Pope Francis. Many who have joined me hold, like I do, that Benedict remains the one true Pope.”

On Aug. 7,Sacramento’s Bishop Jaime Soto announced that“by his words and actions” Leatherby was “in a state of schism with the Roman Catholic Church.”

Soto declared that the priest had incurred alatae sententiaeexcommunication. “This means that by his own volition he has separated himself from communion with the Roman Pontiff, Pope Francis, and other members of the Catholic Church,” the bishop said. He called on Leatherby to “repent of the harm he has inflicted on the Church.”

A formal declaration of a priest’s excommunication is a rare phenomenon.

In a private Aug. 3 letter to Leatherby obtained by CNA, Soto urged the priest to change his ways before the excommunication was announced.

“I have received a number of testimonies reporting that you have offered Mass publicly in violation of my withdrawal of your faculties…In the exercise of these illicit rites…you have preached against the Holy Father and omitted the inclusion of his name and mine from the Eucharistic prayer.”

Soto added that he had heard recordings of the priest’s sermons, and both spoken telephonically and corresponded with the priest about those matters.

“Do not heed the voices or sentiments that have driven you to do this. These are not the fruit of the Holy Spirit. You are wounding the Church you have previously promised to serve. Your actions have placed you and others in grave moral danger. Listen to the voice of the Good Shepherd, in whose name I speak with fraternal solicitude.”

After the excommunication was announced, Leatherby, 41, said that he accepts the bishop’s judgment.

“Bishop Soto’s sentence of excommunication against me is consistent with my relationship with Jorge Bergoglio (Pope Francis), with whom I cannot morally, spiritually or intellectually, in good conscience, align myself,” he wrote.

“I deservedly incur excommunication if Bergoglio is indeed the valid Successor of Peter, and I am guilty of causing great division within the Mystical Body of Christ. However, I could not in good conscience do otherwise….When all is revealed, if I am mistaken, I will humbly repent of my sin and error, for I love the Holy Roman Catholic Church.”

Leatherby has been without an assignment in the diocese since March 2016. At that time, he was removed from ministry at a Sacramento parish, amid allegations that he had engaged in an inappropriate sexual relationship with a woman at the parish. He was prohibited from public ministry and his sacramental faculties were withdrawn.

The priest this week said that “I violated boundaries in ways with that woman.”

But Leatherby’s supporters claim the allegations were trumped up, as retaliation against his family, because the priest’s father, a deacon in the diocese, reported to Church authorities that some priests in the diocese were involved in a homosexual affair.

The Diocese of Sacramento told CNA that claim is “not true.”

“The original matter regarding Fr. Leatherby was triggered by an allegation of a ministerial boundary violation with an adult woman. We have no comment on rumors, theories, or complex, alternate explanations of this matter,” a diocesan spokesman told CNA Aug. 11.

The diocese has declined requests from CNA to explain why the canonical case against Leatherby has taken years to adjudicate, or to specify the canonical crimes of which the priest is accused.

In August 2018, Sacramento’s vicar general sent a memo to diocesan priests, to address ”speculation” and “the length of time it has taken to resolve this case.”

According to the memo, Bishop Soto formally initiated a formal canonical process — presumably a canonical trial or an administrative penal process — against Leatherby, shortly after he was removed from parish ministry.

That canonical process stalled, the memo said, because “it took longer than we would have liked to assemble a panel of canonical experts independent of the diocese to address this case.”

But the process began moving forward in January 2018, according to the memo. The case “is still continuing, and is in the hands of other ecclesiastical authorities,” Soto said this week.

While the diocese has not commented in detail on the allegations against Leatherby, parishioners say the charges have divided the Sacramento parish community, Presentation of the Blessed Virgin Mary, that Leatherby led as pastor until he was removed in 2016.

Leatherby had garnered a large following at the parish, especially attracting devoutly Catholic families as he worked to renew the parish school. But some parishioners say the priest’s leadership was marked with problems from the beginning.

Becky Jennings was a volunteer and parent at Presentation’s school during Leatherby’s tenure there. She said her family, like a lot of families, was attracted to the school because of the priest’s orthodoxy, dynamism, and pastoral attention to parish and school.

The Jennings trusted Fr. Leatherby, at first. They thought he was a faithful priest, and they were impressed by his courage and his kindness.

“In retrospect, there were a lot of things that should have been red flags. There were cult-like elements with Fr. Leatherby and his family,” Jennings told CNA.

She said that because Leatherby was pastorally available and engaged in parish and family lives, a “huge cult of personality formed around him.”

“We would have followed him off the end of the earth and trusted him.”

In her judgment, Leatherby “formed a ‘harem’ of spiritual directees around him, and used the idea that someone has to be loyal to their spiritual director to abuse and manipulate them,” Jennings said.

The diocese has not identified the woman who alleged misconduct in 2016. But parishioners, talking to one another on social media, have said she was a part of the parish community, a daily communicant, and a former employee of the parish.

When allegations regarding Leatherby emerged in 2016, Jennings said, many people had a hard time believing them, including her family.

It was “devastating,” she said. “We felt like he was the heart and soul of the community.”

But eventually Jennings started hearing stories from parishioners about inappropriate behavior from Leatherby, and those gave her pause. She said she began to believe that “Fr. Leatherby had us all taken in.”

Jennings added that even in his parish leadership, the priest had tried to sow suspicion of outsiders. In early 2016, she said, “there seemed to be growing paranoia that the diocese was out to get our school.” Leatherby, she said, was especially paranoid about losing control of decisions at the school.

Division in the parish is now stark, Jennings said, with some describing Leatherby as “narcissistic” and controlling, while others maintain the priest was persecuted by the Sacramento diocese.

She said she doesn’t believe that Leatherby was removed as an act of retribution. “I think that was invented out of whole cloth,” Jennings told CNA, “or exaggerated.”

She emphasized that in her view, Leatherby’s family members, many of whom have been connected to the parish, are a “pr machine,” trying to promote the idea that the priest is the victim of persecution, “like a mafia,” Jennings added. Leatherby’s defenders, Jennings said, have smeared the reputation of the priest’s alleged victim within the parish community.

Jennings and her family eventually moved away from the parish, she told CNA.

Soto’s letter this week said the excommunication of Leatherby was not related to the 2016 canonical case. That case is not the only instance of suspected misconduct.

Earlier this year, a video circulated online in which Leatherby, who appeared to be driving a car at night, recorded a video message for an unidentified woman, who, according to Leatherby, is not the subject of the 2016 allegation.

“Hey, Baby Doll,” Leatherby says, as he begins the video.

Leatherby said this week that he accidentally sent that message to an unintended recipient, and acknowledged the video “appears to some as a confirmation that I must be guilty of every sensational detail that has been alleged about me,” the priest said.

The priest said his behavior in the video was inappropriate, but denied it is evidence of a sexual relationship with the woman.

According to Leatherby’s open letter, the video was intended for “a woman who is a friend and who has assisted me significantly to, literally, survive and persevere these last few years and to fight for my priesthood,” and was recorded “after too much to drink.”

“I spoke in inappropriate ways, unbecoming of my priestly state, even if on leave. Thus, it can be taken totally out of context. I do not have a sexual relationship with that woman,” he said, claiming that those circulating the video “are spreading one side of a story that you don’t know the truth about.”

His letter said that a “handful of detractors who are out to destroy me,” and are using the video irresponsibly. He also claimed that if he were inclined towards sexual immorality, “those pathologies would have been detected at the Saint John Vianney Treatment Center in Downingtown, PA, which I was required to attend for five months after being placed on leave. They dissected every aspect of my life and person.”

In 2018, Leatherby wrote to his former parishioners, whom he reportedly had been instructed by the diocese not to contact.

“At this time I feel called to exercise my spiritual fatherhood to a number of individuals like yourselves, for whom I have been a Pastor, spiritual father, or priest friend/acquaintance at one time or another. I believe that the times that our Lord, through our Blessed Mother, has been preparing the Church and the world for over the course of many years are hastening upon us. She has said that it would be a time of great confusion and darkness, which we have all experienced in ways,” the priest wrote.

“My sense is that the times are going to get progressively darker. There will be a cacophany (sic) of voices pulling us in one way or another. We will be seeking to hear the voice of Christ in the midst of the clamor. Stay close to sources that will offer authentic Catholic teaching,” he added.

This week, Leatherby said he plans to petition for laicization, because he is no longer “in union with the church over which Bergoglio reigns.” The priest said that he will “live out my priestly promises independently.”

If the priest is laicized, the canonical cases against him would likely conclude without formal resolution. The Sacramento diocese told CNA it will support Leatherby’s petition for laicization.