Exiled Belarusian archbishop will be allowed to return for Christmas 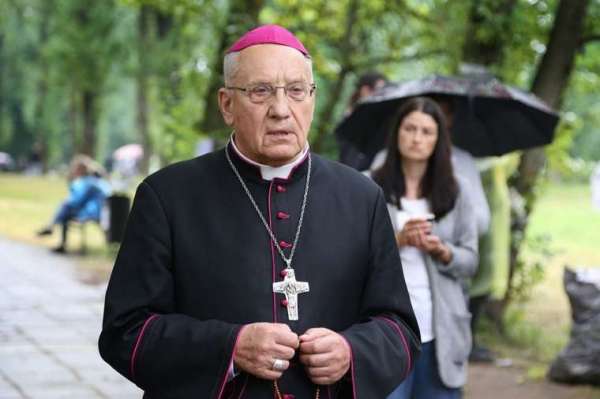 Exiled Belarusian archbishop will be allowed to return for Christmas

Minsk, Belarus, Dec 23, 2020 / 02:34 pm (CNA).- Belarusian authorities announced Tuesday that Archbishop Tadeusz Kondrusiewicz of Minsk-Mohilev, who was exiled in August, will be permitted to return to the country at Christmas.

“The Apostolic Nunciature express its gratitude to the State Authorities of Belarus for responding positively to Pope Francis’ request to return Archbishop Tadeusz Kondrusiewicz to celebrate the Nativity of the Lord with the faithful of which he is pastor,” the nunciature in Belarus stated Dec. 22.

Archbishop Kondrusiewicz’ passport had been invalidated, and he was blocked from returning to Belarus from Poland by border guards Aug. 31. The archbishop has spoken in defense of protests following a disputed presidential election.

Belarus has seen widespread protests since that election. The protests began Aug. 9 after president Alexander Lukashenko was declared to have won that day’s election with 80% of the vote.

Lukashenko, who has been president of Belarus since the position was created in 1994, has suggested Archbishop Kondrusiewicz might be a citizen of more than one country.

“Out of deepest respect for the Pope and because of good personal relations, the Belarusian head of state considered it possible to meet the Pope’s request and gave an instruction to find a solution to the issue, taking into account all available legal mechanisms,” Vladimir Makei, the Belarusian foreign minister, said Dec. 22, according to the state-owned Belarusian Telegraph Agency.

“The upcoming great holiday of Christmas and festive events were an additional reason to take this decision on Metropolitan of Minsk and Mogilev Archbishop Tadeusz Kondrusiewicz despite a number of negative things about this person,” Makei added.

The foreign minister said Belarus and Vatican City “always discuss all cooperation-related issues in an open and candid way.”

“By the way, we closely cooperate with the Vatican within the framework of various international organizations. We support each other virtually across all areas of international, regional and bilateral agenda,” Makei added.

Relations between the Holy See and Belarus have been strained over claims the Church in Belarus is being used to exert foreign influence, as well as Archbishop Kondrusiewicz’ exile.

Archbishop Ante Jozić, who was appointed apostolic nuncio to Belarus earlier this year, arrived in the country in October, being met by both ecclesial and state authorities.

And Archbishop Paul Gallagher, the Vatican’s Secretary for Relations with States, visited Belarus in September in an attempt to resolve the impasse regarding Archbishop Kondrusiewicz.

In Belarus thousands of protesters of the election results have been detained, including a number of priests. At least four people have died in the unrest.

The US, UK, and EU no longer recognize Lukashenko as the Belarusian president. Canada, the UK, and the EU have placed sanctions on senior Belarusian figures.

In September the Vicar General of the Archdiocese of Minsk-Mohilev denied reports from Russia’s foreign intelligence agency that the Church in Belarus is being used by the US, calling them “complete nonsense, fake information.”

“Some media outlets published information provided by the head of Russia’s foreign intelligence service Sergey Naryshkin. This is a fake, this is nonsense. He spoke about some provocations, about the fact that the United States, the CIA and other organizations are trying to use the Catholic Church to undermine the state system in our country,” Bishop Yury Kasabutski said during his homily at a Mass in Minsk.

Naryshkin is director of Russia’s Foreign Intelligence Service. The Russian news agency Interfax reported Sept. 29 that Naryshkin had said, “the United States is also unceremoniously interfering in the religious situation in Belarus … The clergy of the Roman Catholic Church are being asked to openly criticize the Belarusian authorities and to use religious events, including sermons, prayers, religious processions, to conduct opposition political propaganda among believers.”

Archbishop Kondrusiewicz has told CNA: “I was accused that I received from Warsaw some instructions, or something, but I didn’t visit Warsaw.” He said he had visited eastern Poland to celebrate the First Communion of a relative.

Archbishop Kondrusiewicz was born in 1946 in Odelsk, in what was then the Byelorussian Soviet Socialist Republic (part of the USSR), to an ethnic Polish family. The Byelorussian SSR was succeeded in 1991 by the Republic of Belarus.